Why Susan Collins Is More Dangerous Than Mitch McConnell 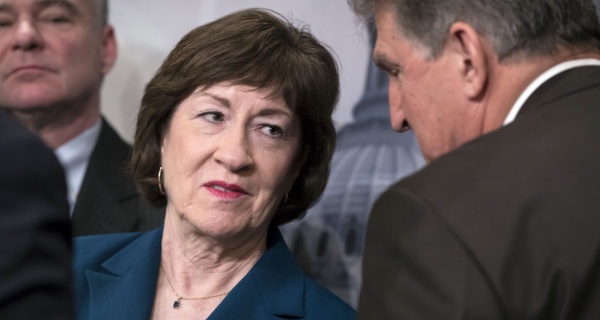 In the era of Trumpian hyper-partisanship, Susan Collins, the “moderate” Republican senator from Maine, seems to get her kicks from positioning herself as a potential swing vote in the most dramatic political moments and then delivering crushing blows of disappointment to Democrats. On Monday, Susan Collins pulled a Susan Collins once again, announcing that she would vote to acquit President Donald Trump on both articles of impeachment, despite it being “wrong for him to ask a foreign country to investigate a political rival.” (She didn’t have to do this for fear of being a lone outlier in her party—Mitt Romney is voting to convict.)

Very shortly thereafter, Trump confirmed that he had not, in fact, learned any lesson. “The call was perfect,” he told reporters, when asked about Collins’s remarks, of the phone call in which he attempted to extort Ukraine President Volodymyr Zelensky to benefit himself politically.

It’s doubtful that Collins, who faces a tough re-election this year, is simply naive and easily duped after serving in the Senate for more than two decades. What’s more likely is that she is deliberately acting as a useful idiot for Republicans—maintaining the illusion of moderacy that she needs to win in her purple home state, while giving her party the political cover to say, “Look, Trump’s behavior was so mild that even moderates are acquitting him.” Arguably, that makes her more craven than Mitch McConnell, who openly power grabs without any semblance of moral scruples and embraces his role as cartoon villain.

Collins has done this before. She pretended for months to be genuinely undecided about confirming Brett Kavanaugh, who has openly opposed abortion rights, to the Supreme Court, because she has long claimed to be “pro-choice.” “Until I’ve had that opportunity to question the judge personally on a lot of important issues and then to observe his hearing, I will refrain from making a decision,” she said in August. One of her staffers told me that same month that Collins had already consulted with Trump before he nominated Brett Kavanaugh and assured him that Kavanaugh was a judge she could greenlight. Her press secretary denied this in a statement. But the way the confirmation played out seemed to confirm my reporting: Collins said, after personally interviewing Kavanaugh, she felt convinced that he would uphold Roe v. Wade, despite many indications in his past that he would not, such as praising former Associate Justice William Rehnquist’s dissent in Roe in a speech to the American Enterprise Institute. And she voted to confirm him, even after a sexual assault allegation that Collins herself described as “sincere, painful, and compelling” further complicated his candidacy.

Sometimes Collins will appear to throw Democrats a bone in the interest of maintaining her reputation as a maverick. Last week, moments after it became clear that her vote would not matter, she came out in support of allowing witnesses in the Senate impeachment trial. And she is the queen of saying she is “disappointed” and “disturbed” and “concerned” at some of Trump’s more egregious behaviors without ever saying how she’ll vote on a particular matter. CNN correspondent Manu Raj reported that she “almost dropped her handbag as she gestured disbelief” when reporters informed her in late 2018 that Trump had threatened to shut down the government if he couldn’t get money for his border wall. Moves like this, however laughable, always have their intended effect, as esteemed outlets like the New York Times continue to describe her as a “moderate.”

Meanwhile, she has delivered victory after victory for the Republican Party and for the most right-wing, corrupt president in United States history. The Supreme Court, now stacked with anti-abortion conservatives thanks in no smart part to Collins’s vote, agreed this year to review a Louisiana abortion restriction that was struck down by a lower court. The law, which requires abortion providers to have admitting privileges at a local hospital despite no medical necessity for that, is basically identical to the one the high court struck down in 2016, which suggests the court is only taking the same case in order to decide it differently with a conservative majority.

Collins is also allowing Senate Republicans to boast a near-unanimous vote on keeping Trump in office, weakening the Democrats’ case that his presidency is an immediate and obvious danger to national security.

The political calculation for Collins may be that Democrats will not support her re-election whether or not she votes their way on any critical issues. She already infuriated them with the Kavanaugh vote, and her only chance at staying in office is if Republicans and Trump pour money into her campaign. That strategy may be working; The Daily Beast reported Monday that a mysterious, deep-pocketed Super PAC based out of Hawaii recently contributed six figures to her re-election, possibly violating campaign finance laws.

But that cynicism comes at a cost. A January Morning Consult poll found that Collins had just surpassed McConnell as the least popular senator in the country, with 52 percent of Mainers disapproving of her and only 42 percent approving. In 2016, she was the nation’s second most popular senator, with an approval rating of 79 percent in her state. By comparison, McConnell, who also faces re-election this year, has 50 percent disapproval in Kentucky, though he has an easier shot in deep-red Kentucky with those numbers than she does in Maine.

Perhaps Collins is the frog in boiling water, who won’t realize until it’s too late that she’s forfeited her legacy as a reasonable moderate with a moral backbone by enabling a president who keeps immigrant children in cages, who just added six African and Asian countries to his travel ban, who is accused by dozens of women of sexual assault and harassment, who pulled out of the Paris Climate Agreement, and nearly started a war with Iran without asking Congress. Whatever her political fate, the media should stop giving her the benefit of the doubt as a tortured ethicist instead of the craven political actor that she’s proven herself to be—it’s long past due.