Us vs. Them: From George Wallace To Donald Trump 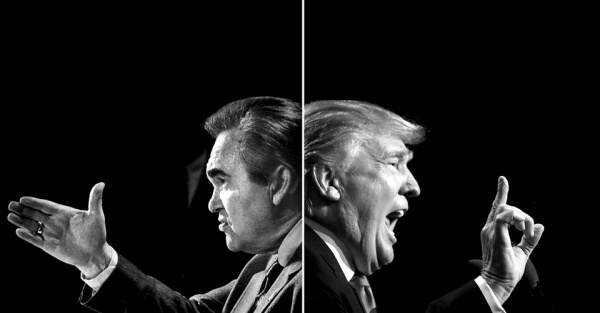 With President Trump’s increasing reliance on the racial grievance to be reelected, the comparisons to the 1968 campaign of Alabama Gov. George Wallace, the Democrat turned third-party presidential candidate who fanned flames of racial division, seem obvious. In many ways, Trump is an updated version of Wallace, in their similar use of language and campaigns built upon angry divisiveness. But the Trump campaign, however much it fans those same flames, may actually be fanning the embers at the end of the racial politics that Wallace once introduced onto a national stage.

A month before the 1968 election, Wallace’s nakedly racist law-and-order campaign polled the support from more than 25 percent of white Americans, but his real legacy was more than the introduction of coded racist political rhetoric. He played a key role in creating a more conservative national politics motivated by racial divisions.

Richard Nixon may be seen as the father of the “Southern Strategy,” but as Nixon adviser Kevin Phillips noted in his 1969 book, “The Emerging Republican Majority,” Wallace’s campaign was Act One in the splintering of the then-dominant national New Deal Democratic coalition. Southern whites, in particular, stirred by Wallace’s message, cut themselves loose from the Democratic Party and ultimately became part of a new conservative Republican base after Ronald Reagan’s presidency in the 1980s and the Newt Gingrich capture of the U.S. House in 1994. As the South turned deep red, every national Republican campaign benefited from a realignment initially stoked by racial division.

But even though Republican presidents benefited on Election Day, they were more than racial provocateurs; they generally had clear ideological and policy orientations. Richard Nixon was the flawed master of foreign policy; Ronald Reagan led the conservative revolution in the 1980s, while both Bush presidencies promised a more compassionate version of conservatism.

Three and a half years into his administration, Donald Trump seemingly stands for nothing except Donald Trump.

While he gives GOP congressional leaders leeway to enact their conservative policies, he has little interest in, or knowledge of, public policy. Like Wallace, he sounds like a political provocateur or a protest candidate, relying on tweets and unscripted comments designed to stir up his base. As the pandemic worsens and his poll numbers drop, his use of racial tropes increases and steps further into space where few contenders for the White House have ventured. But the difference is that he is already the president of the United States with a loyal following and enormous power.

And how has he used that power? Certainly not by performing the traditional American role of an American leader at a time of crisis. While most Americans look for empathy and unity in the midst of a pandemic and painful national reflection on the ongoing crisis of race in America, he subverts efforts to stem the epidemic and denounces protesters as “mobs” composed of “arsonists, looters, criminals” or members of Antifa, and demands that local and state officials use military force to “dominate the streets.”

While two-thirds of Americans decry the state of race relations, Trump’s defense of Confederate statues and his claim that “Black Lives Matter” is a “symbol of hate” are simply the latest installments of a lifetime of stepping over the line on race. And with his devoted 80 million Twitter followers and a vast supportive social media, President Trump has been able to promote rage and paranoia, again much of it related to racial division, on a scale that has never existed in modern American politics.

But Trump’s flames may turn out to be the dying embers of what Wallace and the 1968 election started, as a conservative Republican base once nourished by racial division is overtaken by shifting public attitudes on race and by the sheer force of demographics. The United States is a very different country five decades after Wallace. Where whites made up more than 90 percent of voters in 1968, they’ll make up just over 70 percent this November, a number that continues to drop each election cycle.

Demographic change is already undermining the Republican southern firewall: Virginia has flipped; North Carolina is already purple. Democrat Stacy Abrams’ near-win for governor of Georgia in 2018 may be a harbinger of what’s to come there. And in Texas, with a rapidly growing Mexican American plurality population, and where Democrat Beto O’Rourke narrowly lost to incumbent Republican Sen. Ted Cruz, the ultimate irony may be that former House Republican leader Tom DeLay’s old congressional district seems to be on the cusp of sending a Pakistani-American diplomat, Sri Kulkarni, to Washington.

Paralyzed from an assassin’s bullets, George Wallace privately met with John Lewis in 1981 and pleaded for forgiveness. “ I don’t hate black people,” he repeated over and over. “I’ve come to ask your forgiveness. . . . I want to get right with my maker.” Lewis did not hesitate. He grasped Wallace’s hands and prayed for the man who had ordered his beating on the Selma Bridge in March of 1965. The next year, Wallace won the Alabama governorship for the last time only because of overwhelming support from black voters.

No one would expect Donald Trump, the most nakedly narcissistic president in American history, to ever wrestle with his conscience. If he faces defeat this November, who can be confident that he will not go further to unleash the forces of rage and violence that he has consistently promoted? So Trump is not a replay of George Wallace — but he may also be the last of his kind.

Please watch the video below: