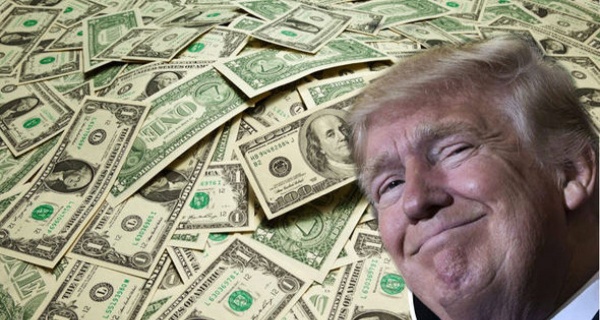 Donald Trump has not given a dime to his reelection campaign, opting instead to fund the entire effort with his donors’ money. His business, meanwhile, has continued to charge the campaign for things like food, lodging, and rent. The result is that $2.2 million of contributions from other people has turned into $2.2 million of revenue for Trump.

And that’s just counting the money flowing directly through the president’s campaign. His reelection apparatus also includes two joint fundraising committees, which work with the Republican party to raise money for Trump. Since he took office, those entities—named Trump Victory and the Trump Make America Great Again Committee—have funneled another $2.3 million into the president’s private business, according to a review of Federal Election Commission records. Then there’s the Republican National Committee, which has spent an additional $2.4 million at Trump properties. Add it all up, and the president, working in concert with the party he leads, has helped push $6.9 million into his businesses since taking office.

It’s a meaningful sum, even for a large business. Consider the payments to Trump National Doral, the president’s golf resort in Miami. In 2017, Trump’s first year leading the country, revenues at Doral dropped from $88 million to $75 million, dragging profits (measured as earnings before interest, taxes, depreciation, and amortization) down from $12.4 million to just $4.3 million. The next year, the RNC, which had spent just $3,000 at the property in 2017, upped its expenditures to $603,000. That helped give a slight boost to the business, which recorded 2018 profits of $9.7 million, according to a spokesperson for the Trump Organization.

Two years later, the RNC is now a well-established customer at the resort, having spent $255,000 there in 2019 and another $510,000 in January. The latter payments provided a nice jolt to the place shortly before the coronavirus crisis shut it down. In total, Doral has done $1.4 million worth of business with the RNC since Trump took office.

It's not the only Trump asset getting political payouts. While the Trump Organization was working to fill space inside Trump Tower, the president’s reelection campaign remained a reliable tenant, spending about $38,000 on rent per month. More than three years after Trump became president, those payments now total $1.5 million, an even bigger haul than the amount that went to Doral. On top of that, the RNC paid $225,000 to Trump Tower Commercial LLC, the entity through which the president holds his famous tower. The campaign spent at least another $187,000 renting space from other Trump entities in New York City.

Down the street from the White House, at the Trump International Hotel, the president’s campaign, joint fundraising committees, and political party have spent at least $900,000. Across the country, some $16,000 of campaign money flowed into its sister hotel in Las Vegas. An additional $1.7 million went to the president’s New York-based hotel empire, according to a review of Federal Election Commission filings. In all, that adds up to $2.6 million for Trump’s hotels, not counting the money that has gone to his Miami golf resort.

The reelection campaign hasn’t spent much money at Mar-a-Lago. But Trump Victory, one of its joint fundraising committees, has picked up the slack and shelled out $345,000 since Trump took office, according to the review of filings. The RNC chipped in $290,000 as well.

Forbes first reported on this practice in late 2018, and again in early 2020. What does the president’s team say about all of this? Not much. When asked about these sorts of payments in the past, representatives have issued statements insisting that the campaign had paid fair-market value under negotiated rental agreements and other service agreements in compliance with the law. Contacted with additional questions late last night, after a new batch of filings came out, neither the Trump campaign nor the Trump Organization nor the Republican National Committee provided an immediate response.

By Dan Alexander and Michela Tindera