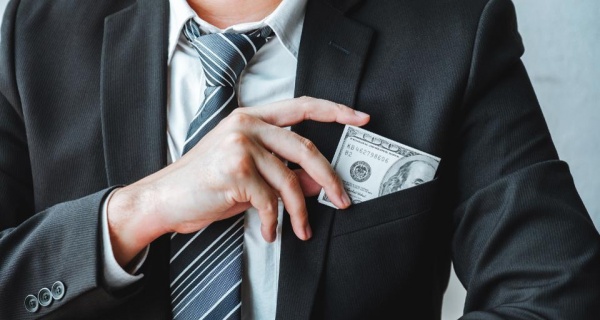 In May of this year, David A. Staveley (a/k/a Kurt D. Sanborn) of Andover, Massachusetts, and David Butziger of Warwick, Rhode Island, were accused of conspiring to illegally obtain funds through the Paycheck Protection Program (PPP). The PPP offers billions of dollars in potentially forgivable loans to keep workers on the payroll, guaranteed by the Small Business Administration (SBA).

Staveley and Butziger claimed to have dozens of employees earning wages at four different business entities when, in fact, no employees were working for any of the businesses. They allegedly sought more than a half-million dollars in loans.

Staveley has since disappeared. According to federal authorities, David A. Staveley apparently cut off his GPS-monitoring device and went missing. He is considered a fugitive, says Jim Martin, a spokesman for the U.S. attorney's office in Rhode Island.

In the press release announcing the charges, the Justice Department warned other PPP loan applicants that the FBI and other federal law enforcement agencies would aggressively pursue fraud charges against anyone who attempted to defraud the PPP loan program. At least 15 individuals have been charged to date in similar cases, including defendants in Virginia, Texas, and Ohio.

Special Agent in Charge Joseph R. Bonavolonta of the FBI's Boston Field Office said that the arrests "should serve as a warning to others that the FBI and our law enforcement partners will aggressively go after bad actors like them who are utilizing the COVID-19 pandemic as an opportunity to commit fraud."

The Small Business Administration (SBA) has previously reported that "disaster loans are vulnerable to improper payments, fraud, and default because loan transactions are often expedited to provide quick relief to disaster survivors." The SBA ramped up hiring and training following Hurricanes Harvey, Irma, and Maria, but clearly, fraud is still occurring - and it had for years before that time.

When I wrote about the arrests of Staveley and Butziger in May, I received many emails from readers about PPP loan fraud. Most were angry. But I was struck by one email that took a different tack. It was from a man named Jeff Grant, who explained that he understood this story all too well: he served almost fourteen months in a federal prison for a white-collar crime he committed when he was a lawyer. That crime was related to improperly taking an SBA loan following 9/11.

Grant's story was both cautionary and understanding, and I was intrigued. He and I subsequently had a conversation (you can listen to it as part of the podcast here). One of the things that struck me during the discussion was that Grant - who understands that what he did was wrong - came out of the experience with a desire to help others escape the same fate. He now works with white-collar criminals at Progressive Prison Ministries.

He wrote about his experience for Entrepreneur magazine. His takeaways are intended to offer insight on what business owners should consider before they take out disaster loans. One of his warnings that resonates with many of the emails that I've received is this: Beware of the belief that rules are suspended in times of emergency.

That’s something that I’ve heard from business owners and tax professionals alike. The guidance governing PPP loans can be confusing and it’s changing all of the time. But don’t confuse those changes with the suggestion that can you can skirt the rules. The rules are still the rules.

And another - one of the ones that Grant and I discussed at length - was this: We can't save our businesses and our lifestyles at the same time. As Grant wrote, "Simply put, SBA loans are meant to save your business, not your lifestyle." Loans aren’t meant to pay for your new car or your dining options: they’re meant to keep the lights on at your business. Be cautious, and be smart.

(You can read the entire article here.)

Grant ended our conversation on a hopeful note. Now happily re-married and still connected with his daughters, Grant said that it took him a while to realize that, "I wasn't the worst thing I ever did."