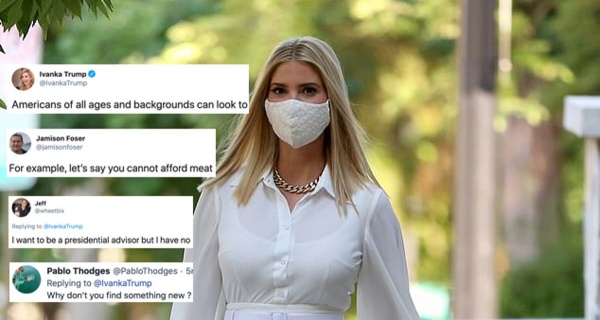 Ivanka Trump became the target of social media frustration on Tuesday when she shared a link to the Trump Administration's new jobs website "FindSomethingNew.org."

"Americans of all ages and backgrounds can look to FindSomethingNew.org to explore new pathways to career opportunities + resources to support their journey," she wrote on Twitter. Her post included an ad for the new site, featuring people claiming they'd been laid off and found new work.

Donald Trump's eldest daughter described the new campaign as a way of "challenging the idea of the traditional 2 and 4-year college" as the "only option to acquire skills."

"We should encourage a college education, of course, and we do celebrate it, we have the greatest college ecosystem of any country in the world, but we have to stop telling students and workers that this is the only viable option," Ms. Trump said.

Jamison Foser, a Democratic political strategist responded to the new ad with incredulity.

"For example, let's say you cannot afford meat and vegetables. You could simply #FindSomethingNew to eat, like cake," he wrote, referencing the "let them eat cake," phrase attributed to Marie Antoinette, the last queen of France before the French Revolution, typically invoked to describe ruling class individuals who do not understand, or do not care, about the plight of common people.

In an ironic twist, Ms. Trump debuted the new site on Bastille Day, a French holiday marking the storming of the Bastille prison during the French Revolution, which subsequently led to Antoinette being executed by guillotine.

Ms. Trump, a graduate of the Wharton School of Business in Pennsylvania, has been in charge of numerous White House initiatives ranging from women's health initiatives to human trafficking despite having no previous experience dealing with politics, policy or public health.

In the past, Ms. Trump has been a fashion designer, an author, and an executive at the family's hotel business.

The "Find Something New" campaign is intended to pressure Americans who've suffered from layoffs to find new work, even if it means switching careers from the ones in which they've trained and invested their time and money.

More than 20 million Americans lost their jobs during the lockdown period in March and April.

While the US is showing some signs of economic recovery - 4.8m jobs were added in June - lack of opportunity is only one of many factors keeping people from participating in the economy.

The coronavirus pandemic is worsening in the US, with California, Texas, and Florida accounting for 18 percent of coronavirus cases worldwide.

Workers ranging from restaurant servers to teachers are afraid to return to work due as a result of the virus.