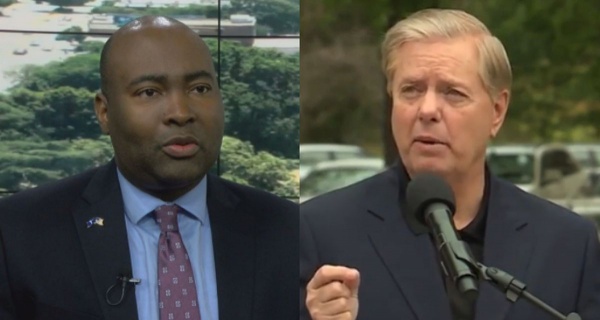 However, with the coronavirus dominating headlines it can be hard to keep up with the race.

Here’s a breakdown of what’s been going on so far.

What’s the big deal with all the cash?

To put it simply, both campaigns have millions of dollars to spend on getting your vote.

Graham’s campaign hasn’t announced its latest fundraising numbers yet, but as of June 20, his campaign had about $13.9 million cash on hand, according to FEC reports.

Harrison’s campaign hasn’t released their cash on hand, but it was $6.7 million as of May 20, according to the FEC.

To put that in perspective, former presidential candidate Tom Steyer spent $18 million on ads in South Carolina in his Democratic primary fight, according to The New York Times. For anyone who remembers what life was like back in February, those ads were nearly impossible to avoid.

So what have the ads looked like so far in this race?

Harrison’s ads right now are centered on introducing him to the Palmetto State. One highlights his upbringing, his education, and his early career. Watch it by clicking or tapping here.

There are mentions of Graham in these ads, but the most pointed criticism of the three-term senator come from Harrison’s social media accounts where he uses the hashtag #SendLindseyHome.

But, if you’re seeing ads critical of Graham on TV, those are coming from an outside super PAC called Lindsey Must Go. These ads highlight Graham’s relationship with President Donald Trump and show statements the senator made criticizing the president during the 2016 Republican primary.

Considering South Carolina is a deeply red state, Harrison would need some voters who support Trump in November but also refuse to vote for Graham, an issue highlighted in the Post and Courier this week.

Graham’s campaign ads say Harrison is more of a “liberal Democrat” than he is portraying himself to be. Specifically, they tie Harrison to House Speaker Nancy Pelosi.

More recent ads have tried to hit this point home by framing Harrison’s big fundraising numbers as proof well-known Democrats are going after him.

“I must be doing something right if all these people want to beat me,” Graham says in a clip from Fox News.

”Our campaign’s record-breaking fundraising reflects the grassroots energy behind Jaime’s movement, and will allow this campaign to make the investments necessary to send Lindsey home for good.”

But is Graham’s seat really at risk?

Those are both commanding leads, but there are some bright spots for Harrison.

In late April, election forecasters moved the race from a “Safe Republican” contest to a “Likely Republican” one.

Recent high-quality polls are scarce in this race, but it is of note that a late May poll conducted by Civiqs found the Harrison-Graham race tied, but found the president up 10 points over former Vice President Joe Biden in South Carolina.

It is worth reemphasizing that FiveThirtyEight, a group that rates pollsters, has given Civiqs a B/C rating and the pollster uses online polling, which while it is cheaper than polling by phone, it’s usually less predictive.

That’s a lot of great info, but what’s the bottom line?

A lot can change in the 117 days between now and election day. And polls should always be viewed as a snapshot in time rather than an outright prediction.

In the case of this race, a Democrat has not held a Senate seat in South Carolina since Fritz Hollings was re-elected in 1998.

However, it’s an already record-setting race, in a presidential election year, during a pandemic, and some polls are showing it could be tighter than anticipated.

Most political reporters got out prediction business in 2016, so I’ll leave it with that.