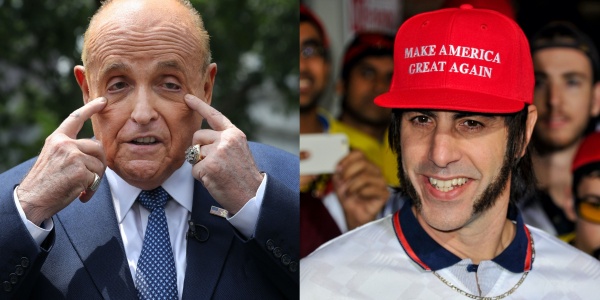 The former mayor and personal attorney to President Trump went to the Mark Hotel on Tuesday for what he thought was a serious interview about the administration’s response to COVID-19. He said he was offered payment for the interview, and asked that the money be donated to the Stephen Siller Tunnel to Towers Foundation.

A female interviewer began the conversation in a room fitted out with a professional set-up of lights and camera with a few softball questions before, as Giuliani tells us, “This guy comes running in, wearing a crazy, what I would say was a pink transgender outfit.

“It was a pink bikini, with lace, underneath a translucent mesh top, it looked absurd. He had the beard, bare legs, and wasn’t what I would call distractingly attractive.”

Giuliani, 76, said he didn’t immediately recognize the gate-crasher as Cohen: “This person comes in yelling and screaming, and I thought this must be a scam or a shake-down, so I reported it to the police. He then ran away.”

Other sources said Cohen, 48, was seen sprinting out of the swanky Upper East Side hotel — a favorite with celebrities and the scene of Meghan Markle’s starry 2019 baby shower — and down 77th Street wearing just a bathrobe but was not apprehended by cops, who did arrive to investigate. The NYPD did not comment.

Giuliani explained, “I only later realized it must have been Sacha Baron Cohen. I thought about all the people he previously fooled and I felt good about myself because he didn’t get me.” A rep for Cohen declined to comment.

However, the former New York City mayor added, “I am a fan of some of his movies, ‘Borat’ in particular, because I’ve been to Kazakhstan. [Adopting a Borat accent, Guiliani repeats a famous line from the movie:] ‘She is my sister. She is number four prostitute in all of Kazakhstan.’ That was pretty funny.”

Baron Cohen last week gatecrashed a right-wing event in Washington posing as a racist country singer — where he encouraged the crowd to chant along to lyrics about liberals getting “chopped up” or “injected with the Wuhan flu.”

Dressed in dungarees, a cowboy hat and a fake beard, the “Borat” comedian tricked organizers of Saturday’s event by the “Three Percenters” militia group by producing a last-minute big-money donation, according to reports and organizers.

The professional prankster then took to the stage in Olympia, getting some the audience to chant along with extreme lyrics including, “Obama, what we gonna do? Inject him with the Wuhan flu … WHO what we gonna do? Chop ’em up like the Saudis do,” seemingly a sick reference to murdered journalist Jamal Khashoggi.

He also wished the same for “sushi eaters” — and worse for “Chinese people,” singing that they should “nuke them up like in World War II.”

When event organizers finally “bum-rushed” the stage, the prankster and his entourage fled into a waiting decoy ambulance.

Many speculated that it could have been a stunt for a new season of his Showtime comedy “Who Is America?,” but the network has not commented.