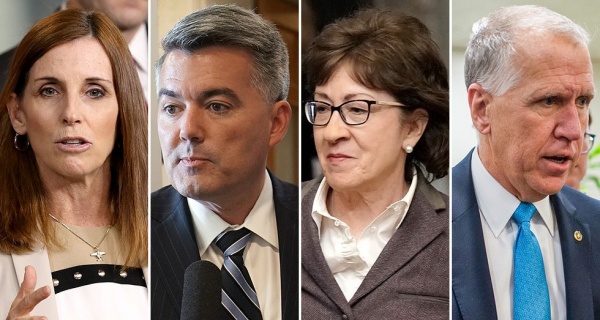 President Trump’s plummeting poll numbers have added new worries he could hurt Republicans in down ballot races in November and even cost the GOP the majority in the Upper Chamber; here are the most vulnerable Republicans up for reelection this year:

Sen. Susan Collins (R-Maine): Collins — a moderate who liberals cheered when she derailed the GOP attempt to repeal the Affordable Care Act in 2017 — drew the ire of Democrats when she voted to confirm Brett Kavanaugh’s nomination to the Supreme Court in 2018. Collins has faced renewed criticism in recent weeks after Justice Kavanaugh dissented in the recent Supreme Court decision that struck down Louisiana’s abortion law, even though the senator herself agreed with the majority decision. Polls show a tight race with Democratic challenger Sara Gideon, the current speaker of Maine's House of Representatives. Larry Sabato’s Crystal Ball, a well-respected polling blog run out of the University of Virginia, and the Cook Political Report currently rate the race a toss-up.

Sen. Cory Gardner (R-Colo.): Gardner hails from a blue state that voted for Democratic presidential nominee Hillary Clinton in 2016 by more than four points. He’s set to square off against 2020 Democratic presidential candidate and former governor of Colorado, John Hickenlooper, who currently enjoys a wide lead in the polls. Pundits say Gardner has tied himself too closely to Trump in a state in which the president enjoys a mid-30s approval rating.

Sen. Martha McSally (R-Ariz.): Arizona went narrowly for Trump in 2016 and has trended more blue since then. McSally lost in a statewide race to Arizona’s other senator, Sen. Kyrsten Sinema (D-Ariz.) in 2018 but was subsequently appointed by Gov. Doug Ducey (R-Ariz.) to fill Arizona’s other seat left open when former Sen. Jon Kyl retired. McSally has trailed in multiple polls to Democratic challenger Mark Kelly, including a Fox News poll that showed her losing to Kelly by 13 points. She has also voted with positions Trump supports a large percentage of the time, according to FiveThirtyEight’s tracker.

Sen. Thom Tillis (R-N.C.): North Carolina, like Arizona, went for Trump in 2016 but is also trending blue. Polls show a tight race between Tillis and his opponent, former Democratic state Sen. Cal Cunningham. State Democrats are hitting Tillis hard for rejecting a Medicaid expansion when he was in the North Carolina state legislature. Larry Sabato’s Crystal Ball and the Cook Political Report currently rate the race a toss-up.

Sen. Steven Daines (R-Mont.): Montana went for Trump by 20 points in 2016 but the state has a reputation for being free-thinking: Sen. Jon Tester (D-Mont.) won reelection in the state in 2018 despite an onslaught of attacks from Trump and the GOP. Daines is set to face a strong challenger, Gov. Steve Bullock (D-Mont.), a 2020 Democratic presidential candidate, and a recent Montana State University poll showed Bullock ahead by 5 points.

Republicans are playing defense in November: the party is in control of the Senate and White House, and will have to defend 23 seats compared to the 12 Senate Democrats who are up for reelection. But one Democratic senator political analysts say stands a good chance of losing in November is Sen. Doug Jones (D-Al.), who narrowly knocked off controversial Republican candidate Roy Moore in a special election in 2017. Alabama is a deeply red state that voted for Trump by almost 30 points in 2016.

Senate Republicans could lose “nearly half of the women currently in their caucus” in November, Politico reports, at a time when the Senate GOP has a record number of women.

Trump’s standing in the polls plummeted in June, amid criticism over his response to the coronavirus and the unrest that swept the nation in the wake of George Floyd’s death. In national polls, Joe Biden has consistently held around a 10 point lead, polling better than 2016 Democratic nominee Hillary Clinton did during the same period.

WHAT TO WATCH FOR

The game plan Democrats follow in 2020. In 2018, Democrats took back the House by picking up suburban districts and focusing on healthcare. All signs point to the party following a similar strategy in 2020, especially given the added attention given to healthcare during the pandemic.