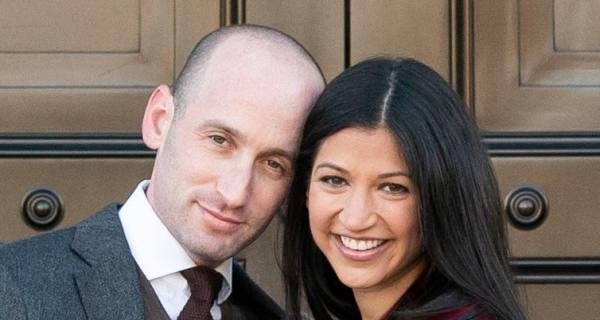 *Katie Miller, a spokeswoman for Vice President Mike Pence, was unmoved by the plight of children at detention facilities at the US-Mexico border, according to a new book by the NBC News reporter Jacob Soboroff.

*The Department of Homeland Security "sent me to the border to see the separations for myself — to try to make me more compassionate — but it didn't work," she said, according to a book excerpt that MSNBC's Rachel Maddow read on her show on Monday.

*Under the Trump administration's family-separation policy, from 2017 to 2019, thousands of children were separated from their parents at the US-Mexico border. Many suffered psychological trauma and were held in unsanitary detention facilities.

*Miller is married to Stephen Miller, an immigration hardliner, and architect of the family-separation policy.

Katie Miller, the spokeswoman for Vice President Mike Pence and the wife of the immigration hardliner Stephen Miller, told the author of a new book that she visited child migrant detention centers to become more compassionate "but it didn't work."

Miller's comments were reported in "Separated," a new book out on Tuesday by the NBC News reporter Jacob Soboroff that chronicles the Trump administration's "zero tolerance" family-separation policy. MSNBC's Rachel Maddow read an excerpt from the book on her show on Monday.

Under the family-separation policy, from 2017 to 2019, thousands of children of migrants were separated from their parents at the US-Mexico border and placed in unsanitary detention facilities.

Maddow previewed a part of the book where Soboroff interviewed Katie Miller, who at the time was a spokeswoman for the Department of Homeland Security, the agency enacting the policy.

The excerpt Maddow published on the show quoted Miller as telling Soboroff: "My family and colleagues told me that when I have kids I'll think about the separations differently. But I don't think so ... DHS sent me to the border to see the separations for myself — to try to make me more compassionate — but it didn't work."

Soboroff wrote: "'It didn't work? I will never forget what I saw. Seriously. Are you a white nationalist?' I asked, exasperated."

Miller responded: "No, but I believe if you come to America you should assimilate. Why do we need to have 'Little Havana'?"

Images and footage from the facilities, where children have been held with minimal supervision in unhygienic conditions, have prompted international condemnation.

Critics seized on Miller's comments in Soboroff's book as evidence of Trump administration officials' callous attitudes toward the children detained under the policy.

"That was Katie Miller in the throes of the national uproar over this government prying kids out of their parents' arms," Maddow said of Miller's comments.

Miller did not immediately respond to Business Insider's request for comment.

Multiple reports have detailed unhygienic and inhumane conditions in the facilities. In June 2019, a team of lawyers told The Associated Press that they found children and teenagers held in a facility near El Paso, Texas, without adequate access to food, water, or sanitation.

A September report by the Department of Health and Human Services' inspector general also found that children detained under the policy were suffering acute psychological trauma.

"According to program directors and mental health clinicians, separated children exhibited more fear, feelings of abandonment, and post-traumatic stress than did children who were not separated," the report said, adding that some children "expressed acute grief that caused them to cry inconsolably."

From 2017 to mid-2018, the US government separated more than 4,000 children from their parents at the southern border, the Los Angeles Times reported in January.

As a DHS spokeswoman, Miller defended the policy, telling CBS News in December 2018 that "the welfare of children in our custody is paramount."

In February, she married Stephen Miller, one of Trump's closest aides and the architect of the family-separation policy. They're expecting their first child together.

Katie Miller, who's been Pence's spokeswoman since October, now plays a key part in communicating Pence's role as head of the White House's coronavirus task force.