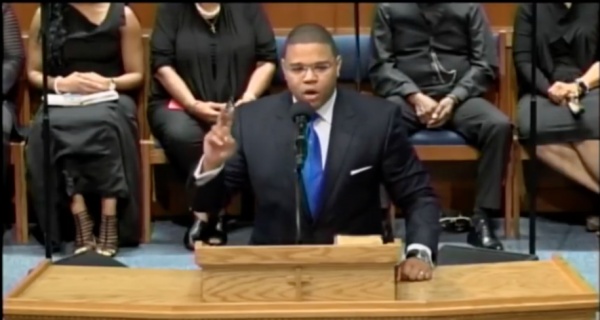 Although the All Def Nation video has garnered over 4 million views thus far, there are many millions who haven’t seen Reverend Dr. Kevin Muriel's speech that passionately and factually addresses the black pastors who met with Trump in August and who claimed Trump is “pro-black.” Regardless of color or political affiliation, the entire country should see this, especially before the November Midterm elections.

During the meeting with Trump in August, one black preacher attending said, “To be honest, this is going to be, and I’m going to say it at this table, the most pro-black president that we’ve had in our lifetime.”

Soon after the Trump meeting, Reverend Dr. Muriel replied to those attending the Trump meeting with a stunning—and what should be considered a historical speech. May I suggest watching the video on this one. It’s well worth the time. Rev. Muriel begins…

So let me tell you just a little bit of research, not just about him personally, but also some of his policies. Perhaps before they went and sat at this table, they should have done their homework. Cause if they had done their homework,

They would have known that President Trump supported the Department of Justice engaging in unlawful voter purging making it difficult for black to go and vote.

They would have knownthat Trump is ending protection for predatory lenders, which disproportionately harm black people.

They would have knownthat he is ignoring the affordable housing crisis by ordering HUD to cripple the rents of poor tenants in public housing, which mostly affect black people, do your homework.

They would have known that he is proposing cutting two hundred billion dollars over the next ten years from supplemental assistance nutritional programs that will bring more hunger in black and brown communities.

They would have knownthat Trump is worsening the health of black communities by environmental deregulation, which disproportionally harms black people through exposure to pollution.

That’s just on the policy side. You don’t have to go to far to ask what about him personally would make me know he is not pro-black. I’m glad you asked. Cause in 1970, Trump’s real estate company tried to avoid renting apartments to black tenants and gave preferential treatment to white tenants.

He began his 2016 presidential campaign with a speech disparaging Mexican immigrants as criminals and rapists. You all remember that?

In 2016, he said of people of color, ‘You are living in poverty, your schools are no good, and you have no jobs….’

Hold on, I ain’t done. He says, ‘You have no jobs, so what do you have to lose from electing me?’

In 2017, Trump said 15,000 recent immigrants from Haiti all have AIDS and 40,000 Nigerians, once seeing the United States, would want to go back to their huts in Africa.

The Reverend Doctor Kevin R. Murriel is a biblical scholar and arguably one of the greatest visionaries and orators of this generation. He is a native Mississippian and a 2008 graduate of Jackson State University where he earned his Bachelor’s degree in Business Administration also being named as the 2008 “Student of the Year” for the College of Business. Dr. Murriel received his Master of Divinity degree from Emory University’s Candler School of Theology and his Doctor of Ministry degree from Duke University–also being named by the Dean and doctoral committee as the Degree Marshal of the 2014 doctoral cohort–the youngest person and first African American in the program’s history to receive such a designation. An Elder in Full Connection in the North Georgia Conference, Dr. Murriel formerly served as senior pastor of Cliftondale United Methodist Church in College Park, Georgia.