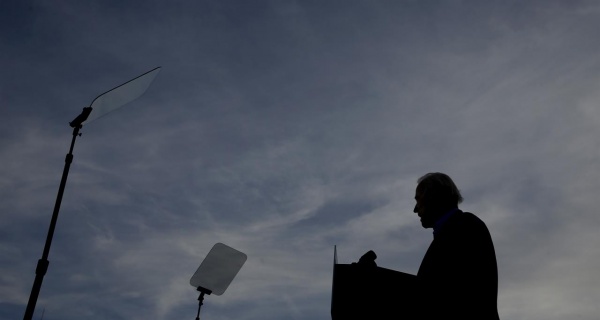 It’s exciting. It can also feel like a colonoscopy.

There will be blood tests. Interrogations about junior high. An analysis of tax returns.

It is an experience Joseph R. Biden Jr. knows all too well from his time on the vice-presidential short list 12 years ago.

Much about Mr. Biden’s own search for a running mate has been nontraditional. He has publicly mused about his criteria. He is not considering men. Above all, his choice could be the most important in years: At 77, Mr. Biden has said he views himself as a “transition candidate.” Left unsaid: His vice president could very well end up being the president next.

Yet as much as Mr. Biden’s process is unique, its contours are familiar. Late last month, he told a local television station that his campaign had begun “doing the background checks” — the latest sign that he is moving toward a short list of candidates.

If history is a guide, Mr. Biden’s top contenders should expect to submit themselves to a process that veterans liken to a series of graphic medical procedures. Extraneous? Maybe. But, well, sometimes that’s the vice presidency, too.

“They basically are disassembling your entire life,” said Kathleen Sebelius, a former Democratic governor of Kansas who, along with Mr. Biden, was vetted extensively by the Obama campaign in 2008. “It was as intrusive and probing as anything I’ve ever been through or would hope to ever go through again.”

Evan Bayh, a former Democratic senator from Indiana and a repeat vice-presidential contestant, somewhat famously compared the vetting process to a colonoscopy — “except they use the Hubble telescope on you.”

Indeed, when Barack Obama called Mr. Biden in June 2008 to request permission to vet him, Mr. Biden initially said no. Finally, he wrote in his 2017 memoir, “I agreed to go through the vetting process, but not with a whole lot of enthusiasm.”

Ms. Sebelius said Mr. Obama had called her when she was at a hotel for a meeting. Like Mr. Biden, she tried to persuade him not to vet her. “I spent a little bit of time telling him why that was a terrible idea,” she recalled. He was undeterred: A member of his vetting team was waiting to speak to her in a room downstairs.

One of the cardinal rules of the process is secrecy, and nearly everyone obeys. Most potential running mates do not speak about the search, if they acknowledge they are being vetted at all. Bob Kerrey, the former Nebraska senator who was vetted by Bill Clinton in 1992, said he flew on a friend’s private plane to the governor’s mansion in Little Rock, Ark., for a meeting so almost no one would know where he was.

Presidential candidates consider many factors when selecting their running mates. They are not always political. Mr. Kerrey, for instance, said he suspected early on he wasn’t getting the job. For one, he wasn’t married at the time and he worried that the optics in a photograph would be off.

Vetting procedures have become increasingly rigorous, in part because campaigns are wary of what can happen if details are overlooked. More recently, the availability of potentially incriminating details on the internet has made vetting seem more imperative than ever lest anyone dig up a surprise. (Of course, the election of President Trump showed that voters might also shrug off what might once have been disqualifying information.)

Tim Pawlenty, a former Minnesota governor, recalled scrambling with his wife, Mary, in 2008 to provide all the information John McCain requested as part of his vetting.

“At one point during the process, our entire living room was covered with documents as Mary and I organized them, typed up answers to the lengthy questionnaire and organized it all into 3-ring binders,” he said in an email. They stayed up late and subsisted on pizza as they raced to meet the campaign’s deadlines.

Julián Castro, whom Mrs. Clinton vetted extensively in 2016, said her campaign had given him a survey seeking answers to more than 120 questions about his personal, political and financial history.

At one point during the interview to go over the responses, one of the questioners spotted Mr. Castro’s cellphone. What would the questioner find, he asked, if he were to take Mr. Castro’s phone and go through it right now? (No, Mr. Castro did not provide the answer to The New York Times.)

“You recognize the gravity of this process,” he said. “But it still has this spy thriller, cloak-and-dagger aspect to it all.”

With the global pandemic sidelining much of Mr. Biden’s in-person presidential campaign, his veepstakes has become a welcome throwback to normal post-primary political activity.

Already, one of Mr. Biden’s top contenders, Senator Amy Klobuchar of Minnesota, has formally withdrawn from contention. In an interview with MSNBC last month, she referred to the calls for racial justice that have swept the country since the death of George Floyd at the hands of the Minneapolis police, saying she believed “that this is a moment to put a woman of color on that ticket.”

Faux modesty is also part of the game: Everyone whose name is on a list almost always declares themselves honored just to be thought of at all. When Senator Catherine Cortez Masto of Nevada said in May she was withdrawing from consideration, she said that it was “an honor to be considered” but that she wanted to keep her focus on her home state.

A brief survey of short-listed names over the years reveals some perennial participants. Mr. Pawlenty, for instance, was vetted by both Mr. McCain and Mitt Romney. Mr. Bayh was seriously considered by Al Gore and Mr. Obama.

Mr. Biden has also at times mentioned some familiar names, including Senator Jeanne Shaheen of New Hampshire, who was one of Mr. Gore’s finalists. (Ms. Shaheen, however, reportedly told Mr. Biden she was not interested in serving as his vice president.) But his pledge to choose a woman has eliminated most of the usual names from contention.

Mr. Obama called Mr. Biden to tell him he had gotten the job as Mr. Biden was waiting at a dentist's office while his wife, Jill, was having a root canal. Despite Mr. Biden’s reluctance just weeks earlier, he was delighted. “I accepted without hesitation,” Mr. Biden said. “It felt good to say yes.”

But as it most often does, the process for most of Mr. Biden’s prospects will likely end in disappointment — and possibly some relief.

James Stavridis, a retired admiral who was vetted by Mrs. Clinton’s campaign, said it had been so intrusive and secretive that he jokingly told a friend, the former C.I.A. spokesman Bill Harlow, that he hoped he was really providing all the information to the Clinton campaign and not Russian intelligence.

When he was not chosen, he and Mr. Harlow decided to write a “humorous novel about the Russians penetrating the U.S. V.P. selection process.” In the proposal for the book, called “The Veepstakes,” they described the tone as “stylistically, an ‘entertainment’ à la Chris Buckley or Elmore Leonard.”

The proposal was widely rejected, Mr. Stavridis said. The premise was too implausible.

Mr. Castro professed to being disappointed when Mrs. Clinton ultimately selected Senator Tim Kaine of Virginia but said he was “glad that all of that speculation was over.”

The experience also came with an unexpected benefit. As part of his vetting, Mr. Castro had to get a blood test, forcing him to confront a phobia he had harbored since he was a young child.

“The best thing was that I had to get over that fear,” he said. “It certainly wasn’t that I got the job, because I didn’t.”