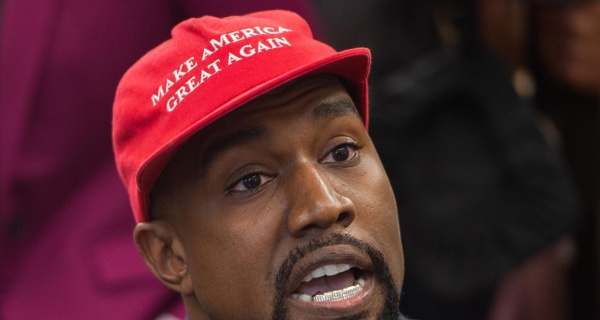 He tweeted Saturday that he would run this fall, which would pit him against his friend President Donald Trump.

Call it a stab of patriotism on the Fourth of July. Or maybe just another way to grab the limelight for a single news cycle.

Whatever the reason, rapper Kanye West tweeted Saturday that he's running for president this year, a threat he's made before.

"We must now realize the promise of America by trusting God, unifying our vision and building our future," he declared on the current president's favorite social media platform. "I am running for president of the United States! #2020VISION."

He even got an endorsement from Elon Musk of SpaceX, Tesla and head-scratching baby name fame.

"You have my full support!" Musk tweeted in reply to West.

It marked at least the third time West has vowed to run for the nation's higher office. At the 2015 MTV Video Music Awards, he announced, "I have decided in 2020 to run for president."

That was pretty much the first and last anyone heard of his desire that year to become leader of the free world.

At Fast Company's Innovation Festival last year, he said he would run in 2024 and that he was considering using the name Christian Genius Billionaire Kanye West.

"What y'all laughing at?" he said. "When I run for president in 2024 we would have created so many jobs I'm not going to run, I'm going to walk."

The hip-hop star and fashion impresario has been criticized for his friendship with President Donald Trump, a Republican who has low support among Black Americans.

"Your power is not just to vote Democrat for the rest of our lives," West said at the Fast Company festival. "That's not the power — just voting on who they told us to vote on. That's not where the power is."

West has met Trump at the White House, donning a "Make America Great Again" hat. In April, he implied he would vote for his friend in the November election.

But if West does drop into the 2020 race, his friend Trump would become his political foe.