Symone Sanders Bet On Biden, And Herself 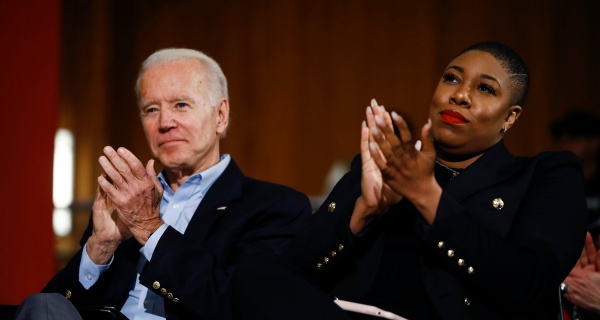 No one is telling her to wait her turn now.

Growing up in Omaha, Symone Sanders would sometimes assume the identity of an alter-ego character named “Donna Burns,” an imaginary TV personality who would repurpose hairbrushes or forks or pens (or whatever) to use as her microphone.

“I wanted to have my own show one day,” Ms. Sanders, a senior adviser to former Vice President Joseph R. Biden Jr., was saying in a recent interview.

If not her own show, Ms. Sanders said, considering the current media landscape, she would settle for a regular gig on ABC’s “The View.” Or maybe a podcast, too, one open only to women. “And we’re going to talk about everything from our perspective and nobody will tell us to shut up,” she said.

As one might divine, Ms. Sanders has always had a desire to be seen and heard, and generally be in the middle of things. For many years, she imagined she’d have to play some other character in order to achieve that; to fashion some kind of safe persona or schtick and, if need be, sacrifice part of her genuine self in order to accommodate the cookie-cutter norms of Talking Head World. She also figured she’d have to wait around and pay years of dues before she could unleash her full charismatic arsenal upon the staid conventions of TV political gab.

As things turned out, Ms. Sanders did not have to wait long at all to play herself on TV; nor would she have to cultivate some latter-day incarnation of Donna Burns. She has become, for a host of reasons, a critical of-the-moment character in this presidential race.

At 30, Ms. Sanders is the youngest member of Mr. Biden’s inner circle, the highest-ranking African-American person on his campaign staff and the most prominent alumnus of a Bernie Sanders presidential campaign.

All of which has positioned her as a key conduit between Biden World and four Democratic constituencies that the former vice president desperately needs: young voters, Black voters, female voters and supporters who were loyal to Mr. Sanders, the Vermont senator whose 2016 presidential campaign Symone Sanders (no relation) worked on as national press secretary, at the age of 25.

Ms. Sanders arrived for lunch at a cafe on the Potomac River in a leopard-skin mask, one of 20 she owns, all sewn by her mother back in Nebraska. (To be clear, she assured, the mask was made of cotton, and “no actual leopards were harmed.”)

She was rushing through what passes for a “typical campaign day” in these most atypical of campaign days. Ms. Sanders has not been on an airplane or attended a presidential campaign rally in nearly four months. This can cause serious withdrawal for a self-described “habitual campaign staffer,” who has declared herself officially done with this work-from-home charade.

On a recent Friday afternoon, Ms. Sanders was fresh off a morning spent “hopping on” and “hopping off” calls along with a pileup of Zoom and Skype meetings from the condo she shares with her “partner in all things,” Shawn Townsend, who runs the Washington, D.C., mayor’s Office of Nightlife and Culture.

Ms. Sanders had a “hard out” at 2:30 p.m. and a prep call for a Fox News interview she was doing with Chris Wallace, one of the many conversations she seems to be juggling at all times, some of which tend to place her in fiery viral scenarios.

Ms. Sanders is also promoting her new memoir, “No, You Shut Up,” which takes its title from one of those viral moments, a televised word-brawl she waged on CNN, where she had worked as a political analyst before signing on with the Biden campaign last year. Her fellow combatant, Kenneth T. Cuccinelli II, a former attorney general of Virginia and future immigration official in the Trump administration, uttered the offending phrase to her during an on-air contretemps in 2017.

“I’ve been given the proverbial shut up multiple times,” Ms. Sanders said. While she happened to receive a literal shut up on live television, the sentiment comes in many everyday forms. “Sometimes it’s you have to ‘pay your dues’ and ‘let the adults handle this,’” she said, pairing her fingers into air quotes to accompany each phrase. “Sometimes you’re told to just ‘wait your turn.’”

Ms. Sanders is not a “wait your turn” character, a condition underscored by her own breakneck career trajectory. She met her first (future) president at age 15, when Barack Obama, then a senator, visited Nebraska in 2005; when she was 16, she lobbied (successfully) to introduce Bill Clinton at an Omaha fund-raiser.

In a job interview with Mr. Sanders in 2015, when he asked her what job she wanted, Ms. Sanders promptly replied, “national press secretary.” This was, to say the least, a bold proposition for a 25-year-old who had never before worked on a presidential campaign. Nor had she ever particularly considered herself a Bernie-style socialist. But Ms. Sanders was suffering through a 27-interview losing streak for potential jobs, so, she said, it wasn’t as if she had many options.

After graduating from Creighton University in Omaha, Ms. Sanders did some work for a Democratic political consultant in Nebraska, allowing her to gain experience in local campaigns. She moved to Washington in 2014, landing at Global Trade Watch, affiliated with the nonprofit progressive advocacy group Public Citizen, before Mr. Sanders’s campaign hired her.

“We had difficulty attracting seasoned Washington, D.C., types because people were afraid the campaign wouldn’t last long or that they would suffer retribution,” said Jeff Weaver, a top adviser to both Sanders presidential campaigns. “There were a bunch of people I talked to who would then go talk to their friends, who would talk them out of working for Bernie because they were worried it would hurt their careers.”

After Mr. Sanders’s campaign ended, Ms. Sanders made some media appearances at the 2016 Democratic National Convention before joining CNN. Her pundit gig fulfilled her childhood Donna Burns fantasy and made her a quasi-public figure at an early stage of her career. This was a stark departure from the quaint old notion that campaign staff members should stay in the background.

“Certainly, in the ’80s and ’90s, if you were staff, your name was never supposed to appear in the paper, period,” said Anita Dunn, another senior adviser to Mr. Biden’s campaign. “If you even showed up in a picture with the candidate, it was considered exceptionally bad form.”

The select few who were anointed as “celebrity operatives” — the George Stephanopoulos and Karl Rove types — were mostly men. And they had to first log significant time and win major victories.

“For people of my generation, we were out in the field for 25 or 30 years before we got recognized,” said Donna Brazile, a longtime Democratic operative whom Ms. Sanders had sought out as a mentor.

Ms. Sanders knew this as well as anyone, Ms. Brazile added, which is why she decided to set aside her TV career for the 2020 campaign. She considered several candidates and was not shy about mentioning the “personal relationships” she had with many of them.

She said she considered Maya Harris, the sister of Senator Kamala Harris, Democrat of California, to be like a “big sister” to her. “I consider Kirsten Gillibrand a good friend,” Ms. Sanders told Glamour Magazine in May 2019. “Cory Booker is a good friend. Elizabeth Warren is one of my favorite people to have tea with.” She obviously had history with Bernie Sanders. And so on.

Ms. Sanders took a meeting with Mr. Biden at the urging of one of the campaign’s co-chairs, Representative Cedric Richmond, Democrat of Louisiana, whom she had met and befriended a few years earlier. She and the candidate spoke for nearly two hours in April, and Ms. Sanders came away impressed with Mr. Biden’s willingness to come off the sidelines after a long career. She was the same age he was — 29 — when he first decided to run for the Senate. She said she could relate to his impatience.

Her established profile allowed her to perform a number of public roles for the campaign: strategist, surrogate and spokeswoman, among others. “I like to say when you walk down the street with Symone Sanders, there’s no question who the celebrity is,” Ms. Dunn said. Ms. Sanders can be as disciplined as anyone in adhering to the tranquilizing platitudes of campaign flackery. She will go on about Mr. Biden’s “theory of the case” and how this campaign is a “battle for the soul of America” and whatnot.

But colleagues also describe her as a fun and engaging presence, free of airs that might come with celebrity status. When it was evident Mr. Biden needed to win South Carolina after disastrous early showings in Iowa and New Hampshire, Ms. Sanders was dispatched to the Palmetto State for four weeks to help run the campaign organization there — a utility role that was part decision maker, morale booster and organizer.

She served as a hyper-visible African-American representative for Mr. Biden in a state whose Democratic electorate was over half Black. Mr. Biden defeated Mr. Sanders in South Carolina by 29 percentage points, sending the former vice president on to a rout of the Super Tuesday states and his eventual sprint to the nomination.

Ms. Sanders’s willingness to be so open about her ambitions is also characteristic of a political generation with little patience for faux-sheepishness or deferential time frames. Likewise, she is part of a cohort of young operatives who are no longer content to subsume their entire identities to the advancement of their candidates.

“If you don’t say what you want and what you stand for, then someone else is going to create your narrative for you,” said Minyon Moore, another longtime Democratic activist and mentor to Ms. Sanders. “This generation of African-American women is going to write their own story. They’re not going to wait for anyone else. And God bless them for that.”

On her phone, Ms. Sanders keeps something that she calls her “life outline.” It is akin to a working bucket list, including the goals she wants to achieve and the experiences she wants to have. When asked what her life outline included, she said she preferred to keep the specifics private.

Presumably, Ms. Sanders has shared many of these ambitions publicly before. “Everyone says don’t tell people your dreams because it’ll kill them,” she writes in “No, You Shut Up.”

The book also includes a famous quotation from the abolitionist writer Frederick Douglass: “Power concedes nothing without a demand,” he said. “It never did and never will.”

All of which can make for a tidy career mantra for Symone Sanders. It is, in other words, not her style to be shy or bashful in these days of urgency.

“One day I want to be White House press secretary,” Ms. Sanders wrote in her memoir. “There, I said it.”