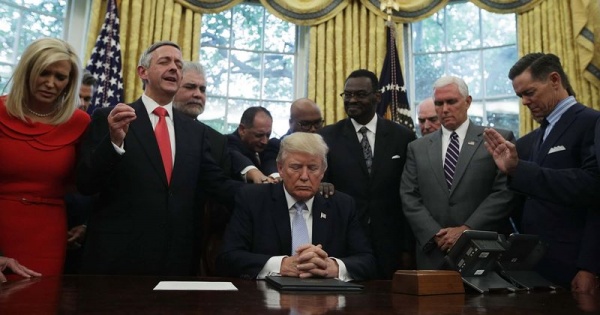 The first video by The Lincoln Project, a new Republican organization taking aim at President Donald Trump, mocks Trump supporters for worshipping in "The MAGA Church."

The debut video juxtaposes Trump and his evangelical supporters with actual Bible quotes. "Evangelicals, Christians of every denomination, and believers of every faith have never had a greater champion-not even close-in the White House, than you have right now," Trump said in a clip that begins the video. As Trump's speech plays, a quote from the King James Bible's Matthew 7:15 is shown. "Beware of false prophets, which come to you in sheep's clothing, but inwardly they are ravening wolves."

It also depicts evangelical and religious leaders praising Trump and offering his support, while also showing some of Trump's least holy moments against gospel music in the background. "I have never seen a more biblical president than I have seen in Donald Trump," former Minnesota Congresswoman Michele Bachmann said in a clip is shown after a clip of Trump questioning why he would ever need to repent or ask for forgiveness.

The Lincoln Project boasts prominent Republicans such as George Conway, a Republican lawyer and husband of White House counselor Kellyanne Conway; Jennifer Horn, former New Hampshire Republican Party chairwoman; and Steve Schmidt, a strategist for George W. Bush, Arnold Schwarzenegger, and John McCain. It was announced in December. The organization's website states that its mission is to "Defeat President Trump and Trumpism at the ballot box." While the group states that they still have policy differences with Democrats, the mission statement indicates that the group values constitutional values. "[T]he priority for all patriotic Americans must be a shared fidelity to the Constitution and a commitment to defeat those candidates who have abandoned their constitutional oaths, regardless of party," the mission statement reads. "Electing Democrats who support the Constitution over Republicans who do not is a worthy effort."

In a news release, Horn offered context for the video. "It is clear that in exchange for power and money these 'pastors' have been tasked with recasting Trump's absurdities and moral failures as nothing short of prophetic divinity," Horn wrote. "President Trump's corruption and dishonesty destroys every person and institution he touches. But with faith leaders like these, who spin vices as virtues, the President believes he is exempt from the wages of sin as long as he delivers power to those Evangelical leaders who so clearly crave it."

The Lincoln Project also mocks Faith and Opportunity Initiative special adviser Paula White in the vidoe. "You're gonna write your checks to Paula White ministry," she said in one scene. "If you do not write that P.O. box, and you do not call that toll-free number, you will never see sustainment in your life and your dream will die," she said in another. White, an evangelical televangelist, often asks for money in exchange for spiritual guidance.

In November 2019, White offered followers a "prophetic instruction for a SUDDEN DEFEAT OVER YOUR ENEMIES," for a $229 fee. In January 2018, the pastor asked followers to send her a "first fruits offering," i.e. money, "to honor God." For those who gave $75 or more, White offered a book and a 2018 calendar.

At the video's conclusion, The Lincoln Project poses a question to its viewers:"If this is the best American Christians can do?" they asked before showing a clip of Trump declaring himself "the chosen one." The organization then answers its own question: "Then God help us all."

Neither the White House nor the Trump Campaign responded to Newsweek's requests for comment. The Lincoln Project also did not respond to request for comment.