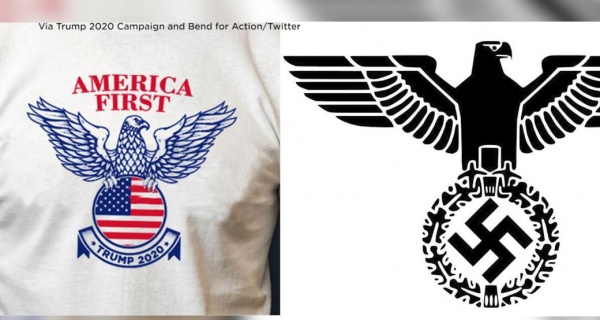 Donald Trump‘s re-election campaign has a new “America First” logo — and it looks a lot like the Nazi eagle used by Adolf Hitler and modern white supremacist groups, according to many critics on Twitter.

The logo, which can be found on T-shirts sold through the Trump campaign website, shows a stylized eagle grasping a circle containing the American flag. The eagle has its wings spread and its head turned to show its profile.

Photos of the new apparel quickly went viral on Twitter Wednesday, with critics sharing side-by-side images of the Trump logo and the Nazi eagle, which the Anti-Defamation League (ADL) describes as a “hate symbol.”

The Nazi symbol shows an eagle clutching a circle containing a swastika. The Trump and Nazi symbols depict the eagle in the same perched spread-wing pose, although the Nazi bird is typically drawn with more sharp-edged lines.

“Trump’s latest logo is yet another rip off of the Nazi logo,” tweeted Qasim Rashid, a lawyer, activist and Democratic candidate for Congress.

Gen. Michael Hayden, the former director of the NSA and the CIA, expressed his astonishment on Twitter with a pair of four-letter words.

Others suggested that the design was an attempt to troll Trump’s left-leaning critics — something the campaign has done several times in the past by altering slogans such as “defund the police” or “Black Lives Matter.”

I've been pretty hard on people who make the Nazi comparisons around here, but Christ, even *I* saw this one right away. This is not some standard American eagle, this is a Trump graphics guy thinking he's being clever and trolling the world by saying "mayyyybe it's close." https://t.co/bm6gWLVSgl

Some are showing these Trump emblems as similar to a famous Nazi emblem, just with the eagle looking the other way.

Nope – there were TWO versions of the Nazi eagle emblem. One of them is an exact match to Trump campaign apparel.

Not even TRYING to hide it anymore. pic.twitter.com/doXyUuuzNv

“The President of the United States is campaigning for reelection with a Nazi symbol,” Bend the Arc, a U.S. Jewish political action committee, tweeted on Wednesday. “It’s not an accident. Bigotry is their entire brand.”

The Trump campaign responded to the outcry on Twitter by suggesting, without evidence, that Democrat Nancy Pelosi, the Speaker of the House, is a “secret Nazi.”

Zach Parkinson, the campaign’s deputy director of communications, described the comparison as “so stupid” in a separate tweet. Parkinson also included several photos of official U.S. seals that show eagles clasping various objects in their claws.

The images show the eagle with its head facing the opposite direction, and with its talons extended to the side.

I'm not even going to type out a tweet this take is so stupid https://t.co/aFsyBoLRlz pic.twitter.com/edLNzq15Hv

Parkinson’s tweets show several takes on the Great Seal of the United States — a stylized eagle clutching an olive branch in one talon and several arrows in the other.

“The olive branch and the arrows held in the eagle talons denote the power of peace and war,” according to the National Museum of American Diplomacy.

The ADL notes on its website that eagles are a common symbol among nations around the world, including the U.S.

“Not every image of an eagle is derivative of the Nazi eagle,” it said. “It is not uncommon, for example, for some Americans to mistake the Blue Eagle logo of the Roosevelt-era National Recovery Administration for a Nazi-derived symbol.”

Various depictions of the Nazi eagle has have shown it facing either direction. The eagle facing the viewer’s right is known as the parteiadler (the party eagle), while the eagle facing to the left is called the reichsadler (the imperial eagle).

The Nazi eagle was a prominent symbol in Hitler’s Germany, and a massive version of the logo lorded over the German Reichstag during the Second World War.

The symbol has been adopted by neo-Nazis and other white supremacists around the world since Hitler’s fall, according to the ADL.

This is the second time in two weeks that the Trump campaign has been accused of using Nazi imagery. Facebook says it removed several Trump campaign ads on June 18 because they included images of an upside-down triangle — a symbol the Nazis used for political prisoners. Facebook said the ads violated its policies against organized hate by using a “banned hate group’s symbol.”

The logo emerged less than a week after Trump retweeted a video showing some of his supporters shouting “White power!” in a Florida retirement community. Trump eventually deleted the video and the White House claimed he hadn’t heard the slogan.

Trump’s “America First” slogan also has its roots in Nazi history, as researcher Molly McKew pointed out on Twitter.

“‘America First’ was the propaganda of the American Nazi Party,” she tweeted. “Trump used it anyway and didn’t care and basically no one called him on it.”

Nazi ideology wasn’t always verboten in the United States. There actually was an American Nazi Party in the 1930s, and it managed to pack about 20,000 people into New York City’s Madison Square Garden for a rally in 1939. “America First” was a popular slogan for the party at the time, as the Washington Post and The Atlantic have previously reported.

Trump has previously claimed that he is the “least racist person in the world.”

He also infamously refused to condemn white supremacists who clashed with anti-racism protesters in Charlottesville, Va., in 2017.

“You had some very bad people in that group, but you also had people that were very fine people, on both sides,” Trump said at the time.