Who Voters Want To Be Joe Biden’s Vice President, According To The Polls 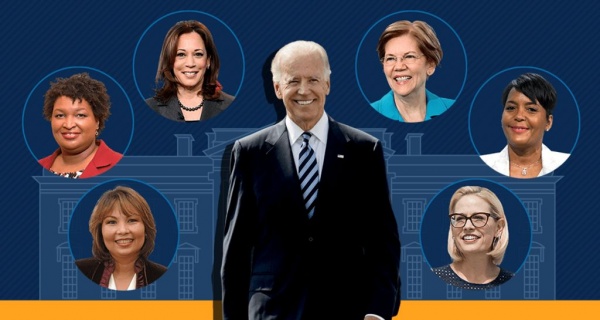 It could be weeks before former Vice President Joe Biden makes a final announcement about his running mate, but some voters have a clear preference: either Sen. Elizabeth Warren or Sen. Kamala Harris, according to recent surveys.

The two senators, both of whom ran for president themselves, led a list of several reported contenders in a slew of June polls: A Yahoo News/YouGov poll of registered voters conducted June 9-10 had Warren in the lead, with 30 percent of respondents backing her and 24 percent supporting Harris. Meanwhile, a Monmouth University poll of a segment of Democratic primary voters fielded June 1-9 found Harris with 28 percent support, while 13 percent preferred Warren. (The Monmouth survey was predominately voters from Iowa and New Hampshire, and skewed older — so the pollster warns against projecting this result onto the general primary electorate.)

Another candidate who notched strong numbers in a June poll was former Georgia gubernatorial nominee Stacey Abrams. When USA Today and Suffolk University asked Democrats about their enthusiasm for different candidates, Harris, Abrams, and Warren received the most positive responses. In that poll, fielded from June 25-29, 36 percent of Democrats said they’d be excited about Harris as a running mate, while 28 percent said the same for Abrams and 27 percent Warren.

In recent weeks, polls have also shown that calls for Biden to select a Black running mate have registered with a growing number of voters: 72 percent of Democrats in the USA Today/Suffolk survey agreed it was “important” for Biden to choose a woman of color.

Experts caution, however, against reading too much into these surveys’ overall results, given some of the factors at play: Both Warren and Harris have extensive records in public service and are likely seeing a large boost due to their name recognition, for example. “It’s more about who people recognize and who they know well than it is anything else,” says Lonna Atkeson, a professor of political science and director of the Center for the Study of Voting, Elections, and Democracy at the University of New Mexico. Plus, she notes, the vice presidential pick hasn’t historically been tied to the electoral outcome or broader voter turnout.

Still, Biden’s choice of running mate could hold more weight this election cycle given his age (if elected, he’ll be the oldest president ever inaugurated), and these polls provide a snapshot of voter sentiment toward different candidates. According to Politico, Biden hasn’t landed on a short list yet, and he’s not expected to announce his final decision until the beginning of August.

While politics aren’t the only thing on his mind — Biden has said he’s focused on a nominee who is ready to be president “on day one” and “simpatico” with his governing approach — these polls offer a limited glimpse of whom some voters currently favor.

Polling so far has highlighted two key takeaways. One is that Warren’s and Harris’s respective profiles currently dwarf those of other contenders whose names have been floated, including Michigan Gov. Gretchen Whitmer, Sen. Tammy Duckworth (D-IL) and Rep. Val Demings (D-FL). The other is that neither lawmaker is a runaway favorite. In the Yahoo News/YouGov and Monmouth University polls, neither Warren nor Harris secured a majority of respondents’ support, a sign that many voters are still open to other options.

In the mid-June Yahoo News/YouGov survey, Warren was up by 6 points with 30 percent support, compared with Harris’s 24 percent. They were followed by Abrams and Sen. Amy Klobuchar (D-MN), both of whom picked up 14 percent backing. (Klobuchar has since withdrawn her name from consideration.)

As captured by the YouGov survey, Warren’s support isn’t the same across different demographics: She had particularly strong backing among voters aged 18-29 and 30-44, while she and Harris were more closely tied among voters ages 45-64 and 65 and older. Harris and Abrams both led Warren among Black voters, with 25 percent and 22 percent support, respectively, compared with Warren’s 15 percent.

Meanwhile, in Monmouth’s June poll, which surveyed Democratic primary voters predominantly located in Iowa and New Hampshire, Harris was the top choice overall. She picked up 28 percent support, followed by Warren with 13 percent, Klobuchar with 12 percent, and Abrams with 10 percent. The June USA Today/Suffolk poll, conducted more recently, also showed that Democratic voters were most excited about Harris, Abrams, and Warren, in that order.

A May Morning Consult poll — which had a 2 percent margin of error — had Warren and Harris polling closely as well. Adding either of them to the ticket would have an effectively neutral impact on the general electorate’s interest in electing Biden, according to the survey: Twenty-six percent of registered voters told Morning Consult they’d be more likely to support Biden if he picked Warren as his running mate, while 23 percent said it would make them less likely to back him. Harris saw a comparable breakdown: 22 percent of registered voters were more likely to support Biden with her on the ticket, while 21 percent were less likely to do so.

Democratic voters, however, were more likely than Republicans or independents to say they’d be more open to voting for Biden if his VP choice is Warren or Harris.

Voters writ large, however, appear much more ambivalent. Take the New York Times/Siena College poll published last week: In the survey, which was conducted in early June, 14 percent of voters said they believed Biden should select a vice president who is Black, while 82 percent said race shouldn’t be a factor. That result is slightly different from that of a June Morning Consult survey, which found that 29 percent of registered voters thought it was important for Biden to select a woman of color, an uptick of 7 points from April.

“Voters are not the best strategists, but the nominee has to be attentive to his base. And a lot of Democratic voters think having a woman of color on the ticket would be a home run,” Monmouth pollster Patrick Murray said in a statement.

The push for Biden to back a vice president who is a woman of color, and a Black woman, in particular, stems from a couple of different places, including the recent focus on addressing systemic racism in policing and increasing representation in an array of fields. There’s also a sense that Biden owes much of his success in the primaries to the support of Black voters, as well as the possibility that a Black running mate could help spur higher voter turnout in November, though the likelihood of the latter is an open question.

“We need America to imagine the possibilities that exist for changing the face of leadership,” says Glynda Carr, president, and CEO of Higher Heights for America, an organization dedicated to supporting black women running for office.

While vice presidential picks have rarely affected electoral outcomes in the past, there is a possibility that a more diverse ticket will increase voter turnout, which is vital for Democrats to win this fall. As experts have emphasized, even though Biden has seen strong support from Black voters, that’s not the same as voter enthusiasm — a dynamic that was apparent during Hillary Clinton’s run in 2016.

Across key battleground states like Michigan and Wisconsin, for example, turnout rates dipped among Black voters between 2012 and 2016. Former President Barack Obama’s groundbreaking candidacies in 2008 and 2012 were viewed as a significant reason for higher turnout from Black voters in both elections, and the historic choice of a Black woman as vice president could possibly lead to a similar uptick. A Northwestern University survey conducted in late May indicated as much: 57 percent of African American voters polled said they’d be more excited about voting for Biden if he selected a Black woman for his running mate.

“I expect that selection of a Black woman as VP would increase excitement about the election by setting the stage for another historic first,” Keneshia Grant, an assistant professor of political science at Howard University, told Vox. Grant emphasized, however, that a focus on descriptive representation is far from enough: She noted that it was also important for both the vice presidential nominee and Biden himself to focus on policies prioritized by Black voters.

Whether changes to turnout will ultimately materialize, however, is uncertain.

Historically, vice presidential nominees don’t sway the electorate much, except in the case of, particularly polarizing selections. As Vox’s Ella Nilsen reported, the research suggests that many voters don’t weigh the vice-presidential pick that heavily in their final decision:

[Chris Devine of the University of Dayton and Kyle Kopko of Elizabethtown College] analyzed election and voter data going back more than 100 years, and found vice-presidential candidates usually only make a difference to the outcome of a general election when they are either very popular or very polarizing.

The Wall Street Journal in 2016 also analyzed years of election data and found that even when a vice-presidential pick was viewed favorably by voters in their party, a majority of voters ultimately said the VP pick ultimately had no measurable impact on their vote for president.

Biden’s age and the possibility that he might not seek reelection after his first term are among the reasons why this year’s selection could loom larger than that of years past. As Biden has said, he’s interested in finding a running mate who’s able to govern from the get-go.

“I want someone strong, and someone who can — who is ready to be president on day one,” he told CBS News in June.