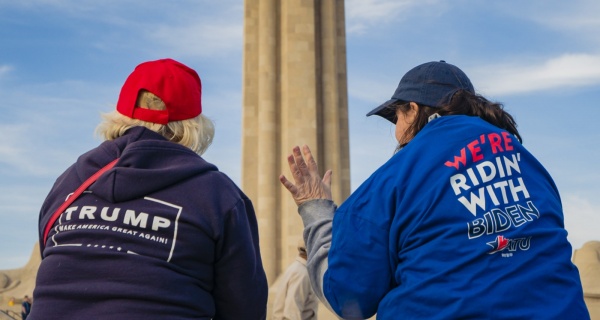 The 2020 race could be decided by double haters—voters who don’t like either candidate, but still feel an obligation to vote. And that’s a sizable part of the electorate.

In 2016, which seems like ancient history now, voters were left with a choice between two of the most unlikable candidates in presidential history. Neither candidate had an approval rating above 50%. In addition, 18% of all voters had an unfavorable opinion of both Donald Trump and Hillary Clinton. But when it came time to enter the polling booth, those voters held their nose and voted for Trump—by a margin of 17 percentage points. And in the crucial swing states of Michigan, Pennsylvania, and Wisconsin, Trump won the double haters by a margin of between 21 and 37 points.

So, as it stands right now, a lot of would-be voters really don’t like the president or the former vice president. But of those who dislike both men, polling shows that the double haters favor Joe Biden by more than 40 percentage points. Indeed, Biden isn’t winning any popularity contests. In certain tallies, he’s actually viewed slightly unfavorably by a margin of 46 to 44. But, without factoring in the impact of Biden’s running mate, that’s almost 10 points better than Clinton in 2016 or Trump today, whose unfavorable perceptions hover at 55% to 41% of projected voters.

Team Trump knows it has to make this election a choice between the two candidates—and not allow the race to become solely a referendum on Trump. Therefore, I bet the campaign is going to spend a vast majority of their $1 billion war chest trying to persuade America to ponder the worst things they could ever imagine about Biden. That’s a page right out of Trump’s 2016 playbook: smear Texas senator Ted Cruz’s father (falsely claiming he was involved in JFK’s assassination); invite Bill Clinton’s sexual abuse accusers to a presidential debate; plant lies about Hillary Clinton’s health. Don’t be surprised in the coming weeks to hear that, say, Hunter Biden was in Wuhan, China, late last year and somehow smuggled the coronavirus to America. (Dear OANN newsroom: He wasn’t!) Last week, in fact, the campaign released an ad implying that before Osama bin Laden was killed—in a raid led by Team Obama–Biden—the terrorist chieftain practically endorsed none other than Joe Biden. (He didn’t!)

The Trump campaign has already begun its hate-mongering. The surreal Tulsa, Oklahoma, rally on Saturday, while woefully underattended, was nonetheless nasty and divisive. And two days before, Facebook declared that it had removed Trump ads (which incorporated Nazi symbolism) from its platform for “violating our policy against organized hate.” The level of double hating, then, is only likely to accelerate. The question is: By November, will more double haters choose Biden or Trump?

Florida governor Jeb Bush called Trump the “chaos candidate.” And even Trump himself would likely agree with that moniker. His brand is disruption. He ran as a radical change agent. That’s tough to do as an incumbent, but up until about January, he was successfully pulling it off. With the pandemic and the protests engulfing the country, however, suddenly the idea of more chaos doesn’t seem so appealing. And the calm and compassion of someone like Biden, who is familiar and, to borrow John Bolton’s phrase, has been “in the room where it happened” may make Old Reliable Joe the better bet for the double-hate crowd.

Most troubling for Trump, perhaps, is the extent to which voters are increasingly worried about the near-term prospects of the nation. According to a recent poll by the AP-NORC Center for Public Affairs Research, 74% of Americans say the country is heading in the wrong direction. This figure reflects the view of 63% of Republicans polled—up from 42% in May. That’s an increase of 21 points in a single month among members of the president’s own political party. And voters who don’t like the direction their country is going in can easily evolve into haters.

Back in 2016, Trump won because of his appeal among various constituencies. He drew male voters, white women voters, non-college-educated voters, and even voters who had previously cast ballots for Obama. (Okay, Trump also had Comrade Putin and Director Comey to thank.) Along with this mix of factions, Candidate Trump also held sway with the anti-Trump-anti-Clinton bloc.

We may not love it, but this fall we may be in for another double date with the double haters.