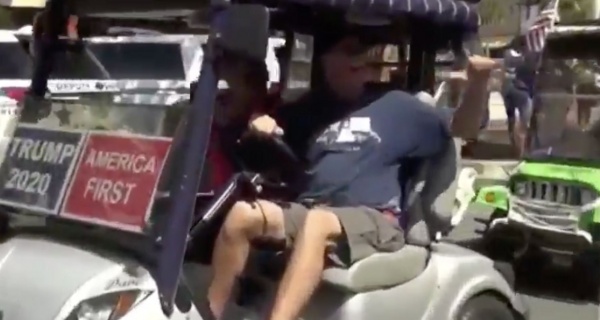 Donald Trump on Sunday retweeted a video shot in a sprawling Central Florida retirement community that shows one of his supporters yelling “White power!” while driving a golf cart and shaking a fist at the president’s critics.

“Thank you to the great people of The Villages,” Trump tweeted at 7:39 a.m. “The Radical Left Do Nothing Democrats will Fall in the Fall. Corrupt Joe [Biden] is shot. See you soon!!!”

The 128-second video captures a caravan of golf carts driven by Trump supporters in The Villages, a largely white, conservative retirement community. The Twitter user who posted the footage Saturday, @davenewworld_2, told the Miami Herald the video was taken during a June 14 event at Lake Sumter Landing Market Square and posted to the Villages-News.com YouTube account. June 14th was Trump’s birthday, which some signs in the caravan acknowledged.

The clip shows the president’s supporters passing a line of hecklers who hurl profanities at the president. One woman wearing a shirt with “Black Lives Matter” scrawled across the front calls several of Trump’s supporters “Nazis” as they pass.

Thank you to the great people of The Villages. The Radical Left Do Nothing Democrats will Fall in the Fall. Corrupt Joe is shot. See you soon!!! https://t.co/4Gg1iGOhyG

“Where’s your white hood?” shouts one heckler, just a few seconds into the video. A man driving a golf cart festooned with Trump signs turns as he passes and, with his left fist cocked at a 90-degree angle, yells “White power! White power!”

The president’s amplification of the video comes as Black Lives Matter protests continue across the U.S. and in South Florida following the death of George Floyd at the hands of Minneapolis police.