Inside Barr’s Effort To Undermine Prosecutors In N.Y. 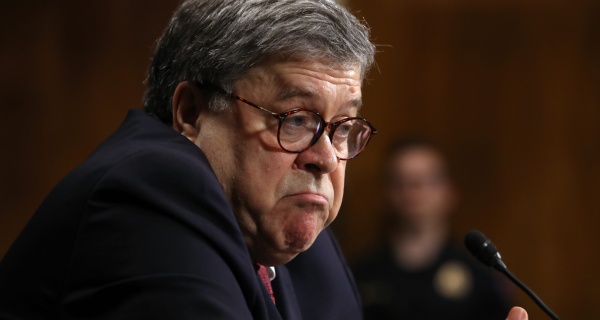 The firing of the top federal prosecutor in Manhattan was foreshadowed by a disagreement over a case linked to President Trump.

The debate between Mr. Barr and the federal prosecutors who brought the case against Mr. Cohen was one of the first signs of a tense relationship that culminated last weekend in the abrupt ouster of Geoffrey S. Berman, the United States attorney in Manhattan. It also foreshadowed Mr. Barr’s intervention in the prosecutions of other associates of Mr. Trump.

By the time Mr. Barr was sworn into office in February, Mr. Cohen, who had paid hush money to an adult film star who said she had an affair with Mr. Trump, had already pleaded guilty and was set to begin a three-year prison sentence, all of which embarrassed and angered the president.

But Mr. Barr spent weeks in the spring of 2019 questioning the prosecutors over their decision to charge Mr. Cohen with violating campaign finance laws, according to people briefed on the matter.

At one point during the discussions, Mr. Barr instructed Justice Department officials in Washington to draft a memo outlining legal arguments that could have raised questions about Mr. Cohen’s conviction and undercut similar prosecutions in the future, according to the people briefed on the matter.

The prosecutors in New York resisted the effort, the people said, and a Justice Department official said Mr. Barr did not instruct them to withdraw the case. The department official, who was not authorized to speak publicly about the matter, noted that Mr. Cohen was convicted and sentenced in December 2018, before Mr. Barr was sworn in, so there was little he could do to change the outcome of the case.

Still, Mr. Barr’s unexpected involvement in such a politically sensitive case suggested that he planned to exert influence over prosecutors in the United States attorney’s office for the Southern District of New York, long known for operating independently of Washington. Mr. Barr and other officials have told aides and other United States attorneys that the Southern District needs to be reined in.

Ultimately, Mr. Berman was ousted in a dizzying series of events, heightening criticism that Mr. Trump and Mr. Barr were purging the government of people perceived as disloyal to the White House.

In an interview with NPR on Thursday, Mr. Barr said Mr. Berman was “living on borrowed time from the beginning” because the president had not appointed him.

And when Jay Clayton, the Securities and Exchange Commission chairman, indicated an interest in running the Manhattan office, Mr. Barr said, it created “an opportunity to put in a very strong person as a presidential appointment to that office.”

“I certainly was aware that given the current environment, anytime you make a personnel move, conspiracy theorists will suggest that there’s some ulterior motive involved,” Mr. Barr said.

More than any other federal prosecutor’s office, the Manhattan office had pursued investigations that angered Mr. Trump. During the case against Mr. Cohen, for instance, prosecutors had indicated that Mr. Trump directed the hush money payments, although the office was not seeking charges against the president.

In addition to prosecuting Mr. Cohen, the president’s former personal lawyer, the office has also been investigating his current one, Rudolph W. Giuliani, over his actions in Ukraine.

Other points of contention included how to proceed against a state-owned Turkish bank that was eventually indicted in an alleged scheme to avoid U.S. sanctions on Iran, and the Justice Department’s decision to assign the United States attorney in Brooklyn to oversee all investigations into matters related to Ukraine. Mr. Berman’s office successfully fended off that oversight.

Mr. Barr’s role in the Cohen case also presaged his involvement in two other high-profile prosecutions of Trump associates: Michael T. Flynn, the president’s former national security adviser, and Roger J. Stone Jr., a political operative close to Mr. Trump who was convicted of lying to Congress and other crimes.

Even before he became the attorney general, Mr. Barr had criticized the special counsel’s inquiry into whether Mr. Trump had obstructed justice, submitting an unsolicited memo to the Justice Department attacking what he called a “novel and legally insupportable reading of the law.”

Mr. Berman had been recused from the case against Mr. Cohen for undisclosed reasons, leaving it in the hands of other senior prosecutors in his office. In August 2018, facing the threat of an indictment, Mr. Cohen pleaded guilty to personal financial crimes and campaign finance violations, one of which stemmed from a $130,000 payment to the adult film star, Stormy Daniels.

In pleading guilty, Mr. Cohen pointed the finger at the president, saying he had acted at Mr. Trump’s direction.

The New York Times reported previously that Mr. Barr had questioned the legal theory of the campaign finance charges against Mr. Cohen, but it was not known that the attorney general went so far as to ask for the draft memo or had raised his concerns more than once.

The memo, written by the Justice Department’s Office of Legal Counsel, addressed the Southern District’s somewhat novel use of campaign finance laws to charge Mr. Cohen. Before Mr. Cohen’s guilty plea, the only person known to face criminal charges for payments meant to keep negative information buried during a political campaign was the former senator and Democratic presidential candidate John Edwards, who was not convicted.

Mr. Barr argued, among other things, that such cases might be better suited to civil resolutions by the Federal Election Commission than to criminal prosecutions, according to people with knowledge of the discussions.

Mr. Cohen, who reported to prison in May 2019, was recently released on furlough and is currently serving his sentence at his Manhattan home, after citing health concerns related to the coronavirus.

There is no indication that the Justice Department planned to issue a formal opinion on the campaign finances charges. Such a step, if taken, might have raised questions about the validity of the case against Mr. Cohen and affected any future effort to investigate Mr. Trump or others in his circle for similar conduct.

Although the Southern District referred to the president as “Individual-1” in court papers and said he directed Mr. Cohen to pay the hush money, longstanding Justice Department policy prevents federal prosecutors from pursuing criminal charges against a sitting president.

In July 2019, the Southern District disclosed in court papers that it had “effectively concluded” the hush-money inquiry and had ended an investigation into whether “certain individuals” lied to investigators or tried to obstruct the inquiry. At least one of those individuals included a senior executive at Mr. Trump’s company, according to people with knowledge of that investigation.

A spokesman for the Southern District declined to comment on Mr. Barr’s involvement in the case involving Mr. Cohen, as did a spokeswoman for the Justice Department.

Mr. Barr’s maneuvering in the Cohen case was not his only attempt to insert himself in Southern District cases. After Mr. Barr was sworn in, one of his first actions was to seek briefings on politically sensitive investigations in the office and elsewhere, people briefed on the discussions said.

Mr. Berman eventually announced charges against the two men, in October 2019, and the Southern District has continued to investigate whether some of Mr. Giuliani’s efforts in Ukraine violated lobbying laws. Mr. Giuliani has not been accused of wrongdoing and he has said he acted appropriately on behalf of the president.

For months, the Southern District prosecutors have been consulting officials in Washington about major investigative steps in the inquiry, according to two people briefed on those discussions.

The arrival of the coronavirus in New York forced Southern District prosecutors to cancel interviews with witnesses in the investigation into Mr. Giuliani and his former associates, people briefed on the matter said.

The pandemic also forced a delay in the trial of Mr. Parnas and Mr. Fruman from this October until next February, putting off what could have been an embarrassing spectacle for the president until after the election.