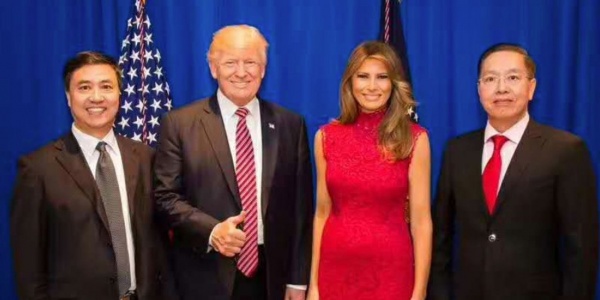 Some of the conduct the Journal described could form the basis for federal felony indictments.

Fronts for the People’s Liberation Army and the Chinese Communist Party donated at least $450,000 to Trump’s 2017 inaugural and his campaign, money the newspaper said was crucial to obtaining direct access to Trump and GOP strategy meetings. A furtive organization was created in California to boost Trump’s chances of getting a second term.

The Journal focused on four men, three of whom operate through fronts for the Chinese military or the Communist Party. One of the three, Tang Ben, is a naturalized American citizen. He and his wife gave $300,000 to Trump Victory, among the largest donations made to that organization. After assuming office, Trump and wife Melania posed for photos with Tang.

The fourth man, a Chinese national whose green card allows him to work here, created Chinese Americans for Trump. The group boosted Trump’s political fortunes and ignored his many racist anti-Asian comments, which have continued to this week.

The Journal said David Tian Wang acted at the behest of the Chinese consulate in Los Angeles in creating the group. This appears to be an example of astroturfing, the practice of masking the identities of sponsors to make them seem to be grassroots participants and to hide financial connections.

Wang gave $150,000 to the group, which passed the money on to the Trump campaign and the Republican National Committee.

The Journal’s report included the following disturbing incident shortly after Trump assumed office and already was campaigning for a second term:

“In May 2017, Mr. Wang attended a Republican National Committee invitation-only leadership meeting in San Diego as a guest of [GOP official Shawn] Steel, the California committeeman, people familiar with the matter said. The gathering was an early chance for Republican leaders to plan the path forward for the party after Mr. Trump’s inauguration.

“Accompanying Mr. Wang to the meeting as Mr. Steel’s guests were three men linked to China’s government. The first was Zhao Gang, whom Chinese official websites identify as a researcher for China’s Ministry of Science and Technology focused on national security, tech diplomacy and other issues. Mr. Zhao’s work has connected him with the senior echelons of China’s Communist Party, including a close associate of President Xi Jinping, say people who have met Mr. Zhao.”

As I read the Journal article—and taking into context the notorious interview Trump gave ABC News last year—Trump is not acting in league with Beijing. Rather, the article shows, Trump and his staff of unqualified family and equally unqualified sycophants are naive and gullible, their rank incompetence unwittingly putting our national security in jeopardy.

A closed-door meeting in San Diego in September 2016, just weeks before the election, was visited by foreigners. The Journal was unable to identify one of the four men who attended, describing him as “an older man wearing a Mao suit [who] led the Chinese side, who participants were told was a personal adviser to President Xi.”

The conduct of the four Chinese men so alarmed one of the Americans present that he alerted American national security officials. That action by Welton Chang, a former U.S. Defense Intelligence Agency officer, stands in sharp contrast to the Trump campaign leadership secretly meeting with Kremlin agents. Donald Trump Jr. received an email that the Putin regime was eager to help Trump defeat Hillary Clinton in 2016. None of the Americans alerted American intelligence officials. Instead, they repeatedly lied, denying any such meeting occurred until The New York Times published incriminating emails.

The Journal revelations come six months after Russian state television, which is under the control of Vladimir Putin, called Trump a “Russian agent” and referred to Russian foreign minister Sergey Lavrov as Trump’s “puppet master.”

Given the absolute power with which Putin rules as a modern czar, murdering political opponents and jailing rivals, that no rebuke was issued about the television program is the most telling indication of what Putin thinks about Trump.

The Journal report was posted online just hours after John Bolton, Trump’s former national security adviser, revealed that Trump pleaded with Chinese President Xi Jinping for help to win a second term. Trump wanted Xi, general secretary of the Chinese Communist Party, to buy billions of dollars of American soybeans and wheat so that Midwest farmers, a key Trump constituency, would maintain support for him, Bolton wrote in “The Room Where it Happened.”

The Trump Justice Department tried, unsuccessfully, to persuade a federal judge to block publication. The book went on sale June 23.

Soliciting or accepting help from foreign interests is a felony. But in 2016, the leadership of the Trump campaign met with Kremlin operatives after being told in writing that Moscow wanted to help Trump win election. Then, for a full year, Trump associates lied and denied any such meeting happened.

In June 2019, George Stephanopoulos of ABC News asked Trump about accepting help from Moscow or Beijing to win re-election. Embedded in his question was the fact that accepting such help is a violation of American law. Trump disputed that point.

“It’s not an interference, they have information—I think I’d take it,” Trump said, adding that he saw nothing wrong with accepting campaign assistance from foreign powers, even adversaries of the United States. That is one of many examples of Trump’s criminality, disloyalty, and utter lack of patriotism.

At the same time that Trump & Co. have either been duped by or willingly embraced fronts for the Chinese military and the ruling Communist Party, the administration has posed as tough on Chinese infiltration of American academic institutions.

Various academics have been arrested on charges whose significance is unclear, but some of which appear from my reading of court records to be trumped up.

In January the Justice Department arrested Charles Lieber, a globally renown nanotechnology expert who is chair of Harvard University’s Chemistry and Chemical Biology Department. Two Chinese nationals also were charged in connection with aiding the People’s Republic of China.

As described by the Justice Department, the case against Lieber seems to be technical, not substantive. It seems aimed primarily at securing Lieber’s help in convicting the Chinese nationals, one a People’s Liberation Army lieutenant, on theft, and spying-related charges. Lieber’s lawyer, Marc Mukasey, says Lieber is a victim, not a perpetrator.

The Trump Justice Department and local authorities persuaded judges to impose harsh penalties against two Chinese women, one who appears to be just a tourist whose sightseeing went awry.

Yujing Zhang, a 33-year-old Chinese businesswoman who carried a Faraday bag that blocks electronic signals lied her way into the resort last year. It is unclear whether she was a bumbling tourist who wanted to see the American president or an inept spy. Zhang got eight months in federal prison for lying to a Secret Service agent and an order of deportation.

The other woman, Lu Jing, 56, who was acquitted by a state jury on trespassing charges, says she innocently was taking photographs. She was sentenced to six months. Her crime? Nonviolently resisting arrest. Jing crossed her arms, balled her hands and shouted, “No, no, no,” according to Palm Beach police. Think about that –– six months behind bars for that.

Those harsh sentences, the arrest of Lieber, and recent arrests of others all are designed to show the Trump regime is looking for ways to make voters believe it is pushing a hard line on Chinese infiltration and spying even as Trump pleads for favors from President Xi, as John Bolton revealed.

These Trumpian tactics create confusion about where Trump stands. They also deflect attention about Trump & Co.’s perfidy in dealing with fronts for the communist dictator in Beijing.