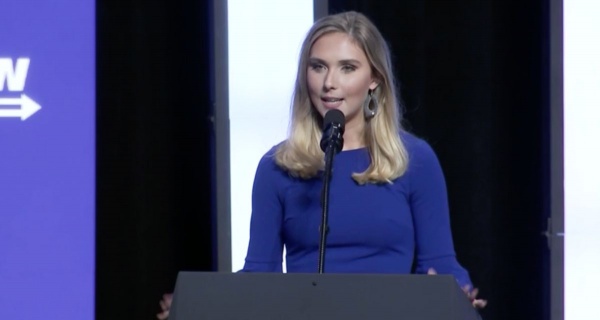 A speaker at President Donald Trump's Arizona event is being criticized over comments she made calling Aunt Jemima a "picture of the American Dream."

Reagan Escudé, a Turning Point USA ambassador who Trump invited to speak on stage Tuesday over her personal experience with "cancel culture," told the Students for Trump crowd in Phoenix how "Aunt Jemima was canceled," a reference to the syrup brand's decision to rebrand after admitting its more than 130-year logo was racially insensitive.

Escudé, who announced on Twitter earlier this month she had been fired from her job "for giving a Biblical response to social issues," said, "Nancy Green, the original, first Aunt Jemima, she was the picture of the American Dream."

"She was a freed slave who went on to be the face of the pancake syrup that we love and we have in our pantries today. She fought for equality, and now the leftist mob is trying to erase her legacy," Escudé added. "And might I mention how privileged we are as a nation if our biggest concern is a bottle of pancake syrup."

"American Dream" was trending on Twitter Wednesday afternoon, and the phrase was mentioned in over 50,000 tweets, many of them critical of Escudé for misrepresenting Green's story.

Ice Cube, the rapper, tweeted the clip and called the student a "Future Fox News anchor." (Escudé responded she was "flattered.")

CNN has reached out to both Turning Point USA, which hosted the event, and Escudé for comment. At the time of publication, neither had replied.

Hours after the clip went viral, Escudé responded in a tweet: "Aunt Jemima rose above what was a horrible situation and turned it into something good, leaving a legacy that Americans will remember forever—hence, the American Dream. It's a shame that most don't understand!"

In reality, there is no historical evidence Green was ever made wealthy by the partnership, despite the company using her likeness on their pancake syrup. She was born into slavery and worked as a nurse and caretaker for the majority of her adult life, according to WBEZ. A 1923 obituary in the Chicago Defender found by WBEZ said she spent 20 years traveling the country demonstrating the pancake mix.

Last week, Quaker Oats said they would retire the more than 130-year-old Aunt Jemima brand and logo, acknowledging its origins were based on a racial stereotype."

The brand's origin and logo is based off the song "Old Aunt Jemima" from a minstrel show performer and reportedly sung by slaves. The company's website said the logo started in 1890 and was based on Green, a "storyteller, cook and missionary worker."

"As we work to make progress toward racial equality through several initiatives, we also must take a hard look at our portfolio of brands and ensure they reflect our values and meet our consumers' expectations," Quaker Oats said in a statement provided to CNN Business.

The company says its Aunt Jemima brand will donate $5 million over the next five years to "create meaningful, ongoing support and engagement in the Black community."