Jill Stein Cost Hillary Dearly In 2016. Democrats Are Still Writing Off Her Successor. 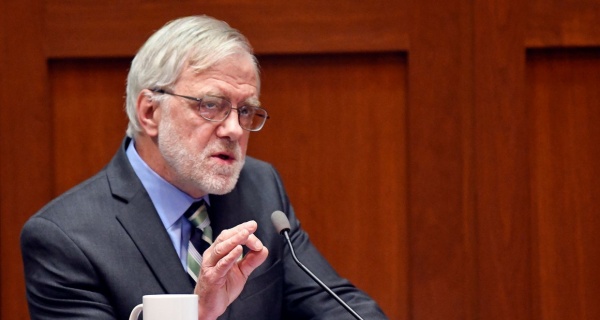 The Green Party is set to nominate Howie Hawkins, a Democratic socialist making an explicit play for disaffected Bernie voters.

For good reason: Had voters in Pennsylvania, Michigan, and Wisconsin cast their ballots for Clinton rather than the Green Party’s Stein, Clinton would be president.

Now, with the Green Party set to elevate its presumptive nominee — Howie Hawkins, a longtime labor activist keen on attracting disillusioned Bernie Sanders voters and calling for a “#DemExit” — many Democrats are unfazed. Not to worry, they say: Trump will be a sufficiently mobilizing force for Democrats this time around.

“I think there’s less of a concern than there was in 2016,” said Jeff Weaver, Sanders’ longtime aide who is also heading a Super PAC dedicated to mobilizing Sanders voters for Biden. “Even those of us who thought Trump could win thought Hillary Clinton would win, and I think that gave people a license to go vote for third-party candidates. But that’s not the case now. We know Trump can win.”

He added: “I think the Biden campaign has done a much better job of reaching out to the progressive wing of the party and to progressives outside the party in order to bring them in.”

Many party operatives, including aides to Joe Biden, didn’t know who Hawkins or his Wisconsin-native running mate Angela Walker were at first when asked this week.

Democrats could come to regret their lack of concern. In an interview this week, Hawkins said “we’ve got Bernie Sanders refugees coming in bursts ever since Super Tuesday.”

A self-identifying democratic socialist who's been campaigning on a “Green New Deal” since 2010, Hawkins believes he’s ideally suited to pick up Sanders voters. “The main message is: if you were with Bernie for Medicare for All and the Green New Deal, then we’re the ticket for those things,” he said. “Don’t waste your vote on what you don’t want.”

As Clinton — and Al Gore before her — learned, even seemingly minor factors can sway a close election. Trump faces his own third-party challenge from the Libertarian Party, but may have dodged a more formidable threat when Rep. Justin Amash decided against pursuing that party’s nomination.

Some Democrats think they've also caught a break with Hawkins. Their sense is that even voters on the far left recognize that anti-Trump forces can't afford to splinter, and so the era of Green Party spoilers may be coming to an end. The Green Party is on the ballot in swing states like Florida, but it has struggled to gather the required number of signatures in a few other battlegrounds, such as Arizona.

A perennial candidate in New York state whose high water mark was about 5 percent of the vote in the 2014 gubernatorial race, Hawkins is running a bare-bones campaign with minimal staff. When POLITICO reached out for an interview, a press aide immediately provided the candidate's cell phone number, and Hawkins personally emailed follow-up information.

One Hawkins aide said that Stein has “zero involvement in the campaign.” Even after criticism of Stein for dining with Russian President Vladimir Putin in 2015 and evidence that Russians ran a Facebook ad promoting her candidacy, Hawkins occasionally appears on the Kremlin-backed network RT.

“They asked me,” he said. “Beggars can’t be choosers.” He added that he's selective about which of the network’s commentators he'll appear with.

There are rumblings within the Green Party of a potential swap of Hawkins for former Minnesota governor and pro wrestler Jesse Ventura at the party’s nominating convention in July. But Hawkins’ campaign is confident he'll have the nomination effectively clinched as soon as Saturday, following Michigan’s state nominating convention.

Critics from the left-wing of the Democratic Party note that while Hawkins is set to be the nominee of both the Green and Socialist parties, the more vibrant Democratic Socialists of America (DSA) declined to endorse him. After Sanders’ defeat, the DSA — which does not have a presidential ballot line — said it would not endorse Biden, either.

“His inability to get taken seriously by the DSA is a reflection on him,” said David Duhalde, a longtime member of the Democratic Socialist of America who was political director at the Sanders-aligned group Our Revolution. “I think people are fed up at these quixotic candidacies and that overall speaks to the Green Party project has sort of stalled.”

Weaver was more withering. “The problem with the Greens is it's like a political mirage,” he said. “You come over to the sand dune hungry for progressive change, you look off into the distance and you see Medicare for All and a Green New Deal, and when you get there, it's just sand." He cautioned, however, that the Green Party or other third parties can matter at the margins in critical states.

Some veterans of Clinton’s campaign urged Biden not to prematurely dismiss Hawkins and to keep up the effort to unite the party.

“Biden is not over 50% in the battleground states and often his lead is in the margin of error. Anything could happen in the next five months,” Clinton’s 2016 campaign manager, Robby Mook, wrote in a text message. “What matters most is reminding people that Trump could win.”

The Hawkins campaign could also affect Biden’s vice presidential search. If the campaign is worried about disaffected, left-wing millennials who supported Sanders sitting out the election or voting for Hawkins, then a more progressive candidate like Sen. Elizabeth Warren might have an edge.

But pollsters are divided on the question of how much more work Biden has to do to court the left.

Longtime Democratic pollster Stan Greenberg recently conducted battleground surveys in late April and early May and concluded that Biden is underperforming Clinton among Sanders voters. Biden is being “held back by underwhelming support with millennials,” according to a presentation deck he gave to Biden’s team in May. Other polls have shown similar apathy, though Biden’s numbers have improved in recent weeks.

NextGen America recently conducted its own survey of young people through Global Strategy Group and came to the opposite conclusion of Greenberg. “Joe Biden is in a much better place at the end of the Democratic primary than Hillary Clinton was in 2016, with third party candidates a much less dangerous obstacle and the nominee boasting stronger personal ratings,” the group wrote in a presentation released this week.

A GSG/NextGen poll conducted in July 2016 found 22 percent of 18- to 34-year-olds in battleground states backing a third-party candidate. That compares to just 7 percent nationwide now.