‘It’s Going To Be An Angry Mob’: Kentucky Cuts Number Of Polling Stations By 95 Percent Ahead Of Primary Voting 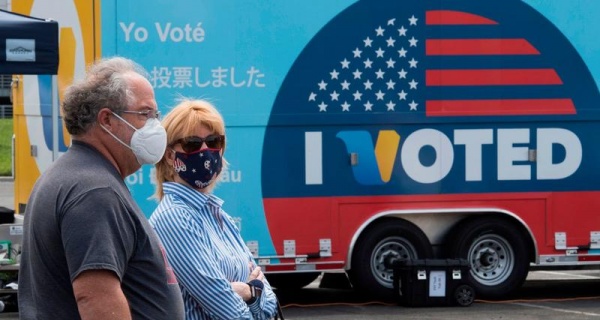 Kentucky lawmakers have warned the state was heading towards a disastrous primary election this week, as ballot problems, voter confusion, and a severe shortage of polling places threatened to suppress turnout amid the coronavirus pandemic.

State officials on both sides of the political aisle released a joint statement condemning US District Court Judge Charles Simpson’s ruling against a case that argued having just one polling site in most of the state’s 120 counties would result in voter suppression.

“We believe the judge disregarded evidence from our expert witness that one location will suppress the vote, particularly among African Americans,” read the statement, co-authored by Jason Nemes, a Republican state representative, and Keisha Dorsey, a Democratic councilwoman for Louisville Metro. The lawmakers were both behind the lawsuit, which demanded an increase in statewide polling locations.

Reports have indicated voters throughout Kentucky received inaccurate absentee ballots — which many requested in order to vote from home rather than flocking to the polls in droves amid a Covid-19 outbreak — that do not match their party affiliations. In Kentucky, voters must be members of a party to participate in its primary elections.

In a typical election year, Kentucky has about 3,700 polling sites, according to most reports. When Election Day arrives on 23 June, there will be just 200 polling sites across the state — with some of those sites having to serve upwards of 600,000 residents.

Voting rights expert Ari Berman wrote in a tweet: “There will be one polling place for 616,000 registered voters in Louisville’s Jefferson County, where half state’s black voters live.”

He added: “This is going to be a disaster.”

Local officials blamed the pandemic and a seemingly rushed effort to send out ballots, which led to some voters reportedly receiving inaccurate paperwork.

"It's possible they got the wrong ballot, when there's over 2,200 different ballot styles and there are two ballots sitting next to each other one is a Republican and the other is Democrat," Nore Ghibaudy, spokesperson for the Jefferson County Clerk's Office, told WDRB in Louisville, Kentucky. "You've got to remember this is a very unique situation. We have sent out over 200,000 ballots in a short period of time working 24 hours a day seven days a week."

Other officials meanwhile said a large turnout of voters in some counties would lead to an “angry mob” — with long lines, packed polling sites, and further confusion about the primary process.

“If we get a massive turnout at Kroger Field, that’s just going to be an angry mob,” Don Blevins Jr, a clerk for Fayette County, told Washington Post, adding: “That does worry me a little.”

Meanwhile, closely-watched races could lead to bigger turnout than in recent years, with 937,000 voters requesting early ballots, the newspaper reported.

Judge Simpson pointed to three measures the state implemented amid the coronavirus pandemic, including “making absentee ballots available for all voters, providing early in-person voting options for 15 days leading up to Election Day, and establishing a polling place for Election Day in-person voting”.

Voting rights activists said the state’s issues could cause it to have an Election Day similar to Georgia’s recent primaries, plagued by a shortage of polling sites, widespread confusion, and missing absentee ballots.

Ben Jealous, president of People For The American Way, described the situation as “Our Next Electoral Nightmare.”

“Half Kentucky’s Black voters live in one county,” he wrote. “It will have one polling place... for 616,000 registered voters.”