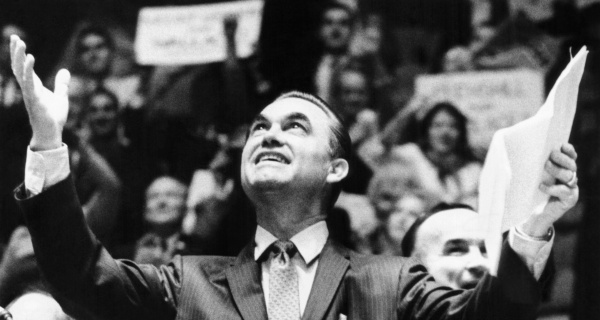 The racist Alabama politician said “looters” in civil rights protests should be shot “on sight.” President Trump said, “When the looting starts, the shooting starts.”

Donald Trump is being compared to the incendiary segregationist George Wallace in a dramatic new ad by the Lincoln Project.

The ad by the anti-Trump Republican political action committee features segments of an old interview with Wallace, the racist four-term governor of Alabama who also repeatedly ran for president. The Democratic politician sounds strikingly like Trump — particularly when he declares that looters during the civil rights movement should be shot “on sight.”

The line was similar to Trump’s recent threat during the ongoing protests against racism and police brutality that “when the looting starts, the shooting starts.”

The Lincoln Project ad, entitled “Tulsa,” juxtaposes scenes of what it calls “real leaders” like Martin Luther King Jr. and Bobby Kennedy, and their inspiring calls for unity to remarks from Wallace and Trump.

“Trump’s decision to hold a rally in Tulsa on the weekend of Juneteenth and in the location of the worst race massacre in American history tells voters all they need to know about him. In a time of multiple crises, Donald Trump has further divided and incited Americans, rather than bring us together,” Stuart Stevens, senior adviser to The Lincoln Project, said in a statement.

Another Republican group against Trump wasn’t only concerned about the president spreading hate at his rally — but COVID-19 as well.

Republican Voters Against Trump issued their own ad — with tweet — Friday pleading with those attending the rally to wear a face mask.

“Unfortunately Donald J. Trump is the president of the United States and he politicizes everything, including wearing a mask,” says the narrator in the RVAT ad. “If only we had a president who would take public health seriously, and unite us, instead of divide us.”

Check out that ad here: