Wealth Inequality Doesn’t Show Up In Broad Economic Metrics, Masking The Fragility Of Our Current System 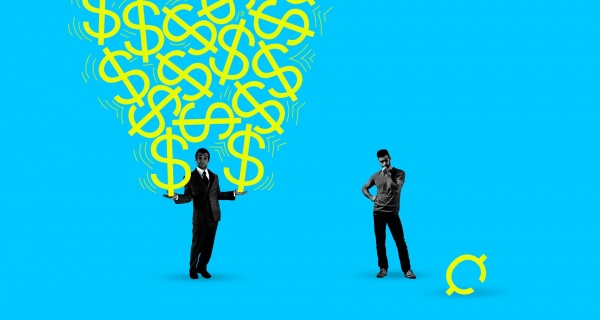 Economic inequality is not a story that can be told in the aggregate. Most economic data are averages, which means that greater inequality—more wealth in the hands of the few—mathematically masks the real economic data that reveal the fragility of our system.

Take this data point from the Federal Reserve’s 2017 report: The average net worth for U.S. households is $692,100. Not bad. Dig just one level deeper into that same data and the average net worth of white households is $933,700. For black households, it is $138,200. Go just a little bit deeper to see that part of this wealth disparity is due to homeownership: 74% of white families own a home; only 44% of black families do. And black families’ homes are less likely to appreciate in value, according to a McKinsey report released in mid-June that examined the wealth gap. That discrepancy in homeownership is rooted in the not-too-distant past: From 1934 to 1962, more than 98% of federally backed mortgages went to white borrowers.

There’s also a broader economic implication: These gaps make Federal Reserve policy less effective. For example, the low interest rates and flood of liquidity that the Fed unleashed to get the economy out of the global financial crisis fueled the last bull market. But the biggest beneficiaries were higher-income families that tend to hold much of their wealth in financial assets, while most middle-class families’ wealth is tied to their homes. “The big criticism of the government stimulus in 2008 and 2009 was that it directly stabilized financial markets and let the market get back but didn’t prevent home foreclosures that affected ordinary people,” says Robert Gordon, professor of economics at Northwestern University.

With the Fed unleashing another wave of liquidity and keeping rates low for the foreseeable future, it again has boosted stocks and allowed those with high credit scores to borrow cheaply.

But lower-income borrowers already saddled with debt can’t typically access the ultralow rates—and tend to have trouble accessing funding from banks entirely, exacerbating the inequality, says Karen Petrou, co-founder of regulatory advisory firm Federal Financial Analytics. Though aggregate Fed data suggest that most households were not highly leveraged last year, the bottom half of households held nonmortgage liabilities that were 170% of the value of the durable goods they owned—a precarious position if anything were to go wrong, Petrou says.

Other stimulus measures also tend to help those that are already in better shape. Much of the Fed’s firepower helped stabilize funding and other markets, and while it set up a Main Street lending facility, its minimum-size loan is too big for most tiny businesses. And larger businesses with long-established relationships with banks nabbed the first rounds of the Paycheck Protection Program. “When you work within confines of inequality, you are essentially just going to reproduce what you already have,” says Andre Perry, a fellow at the Brookings Institution. “When they said the loans were going through traditional big banks—that is where traditional discrimination happens—no one was surprised by roughly 95% of black-owned businesses not getting any of the loans.”

Wealth offers a safety net in bad times, such as during broad economic or health shocks. But it’s equally important in good times, as it allows individuals to take risks in their careers and businesses.