Why Andrew Jackson’s Legacy Is So Controversial 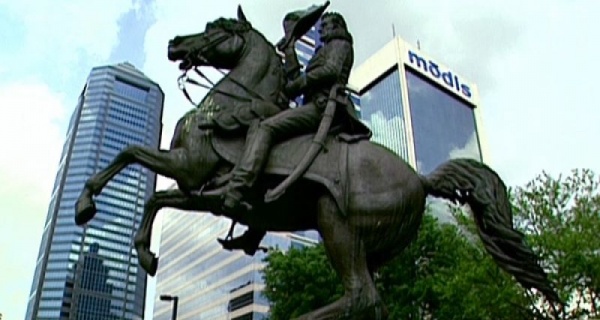 The seventh president was a slave owner and oppressed Native Americans. Should he be revered...or reviled?

Should the seventh president be revered or reviled? The question of how to grapple with Andrew Jackson’s tarnished reputation has existed since Old Hickory’s contested lifetime.

Known as strong-willed, argumentative and combative in his day, Jackson’s critics point to his harsh treatment of enslaved workers and his forced removal of Native Americans from their ancestral lands as reasons why valorizing him is offensive. His fans, on the other hand, cite him as a populist hero who challenged the political establishment and ushered in a new era of exploration and American expansion. Jackson is considered so influential that his face is on the front of the $20 bill—a fact that has inspired controversy in recent years as consecutive Secretaries of the Treasury tussle over whether it’s appropriate to keep him there.

Now, news that Jackson’s grave was vandalized at The Hermitage, his plantation in Nashville, has breathed new life into the debate. Here’s what happened at Jackson’s tomb—and how it fits into the ongoing argument about his legacy.

Jackson’s tomb was spray-painted with profanities

Jackson’s tomb was defaced by an unknown vandal who painted the stone that covers his grave and that of his wife, Rachel, with the word “killer,” anarchist symbols and profanities, the Associated Press reports. The vandalism was discovered by the Andrew Jackson Foundation on April 27, 2018.

“This is the first time in the history of the home that something like this has happened,” wrote the foundation in a Facebook post. “It’s a sad day for all of us.”

Howard Kittell, the foundation’s president, and CEO told WSMV that restoring the monument “will be incredibly difficult.” He said new security cameras will be installed on the property.

During his lifetime (1767-1845), Jackson went from poverty to wealth because of his slave ownership. Enslaved workers grew his cotton, built and tended his house, and helped him gain a social foothold in Southern society. Jackson owned as many as 161 slaves, buying and selling them, using their labor to build his fortune, and even bringing them to the White House to work for him.

Records show he beat his slaves, including doling out a brutal public whipping to a woman he felt had been “putting on airs.” And when slaves ran away, he pursued them, putting them in chains when they were recovered. In a newspaper advertisement for a runaway slave, he offered an extra $10 for every 100 lashes doled out to Tom, a 30-year-old slave who ran away in 1804.

The seventh president also opposed policies that would have outlawed slavery in western territories as the United States expanded. And when abolitionists attempted to send anti-slavery tracts to the South during Jackson’s presidency (1829-1837), he helped ban their delivery and called them monsters that should “atone for this wicked attempt with their lives.”

Despite Jackson’s support of slavery and participation in the slave trade, his pro-slavery stance has long been downplayed. His biographers are partly to blame, writes historian Mark R. Cheatham, who calls their reluctance to examine Jackson as a slave owner “surprising and disappointing.”

African-Americans weren’t the only people Jackson felt should be subservient to wealthy white men. His presidency is perhaps best remembered for his cruelty to Native Americans. A proponent of “Indian removal,” Jackson wanted to clear newly acquired territories of the Native Americans who lived there so that white settlers could claim the land as their own.

Jackson’s Indian Removal Act resulted in the forced displacement of nearly 50,000 Native Americans and opened up 25 million acres of Native American land to white settlement. He insisted it was for the best; the Native Americans whom he saw as savages and referred to as “my red children,” he felt, were merely collateral damage in a grand push to achieve progress for White Americans. Meanwhile, the policies disrupted and destroyed Native American lives. Tens of thousands died during forced removals like the Trail of Tears in what is now Oklahoma; languages died out as Native Americans were forced to assimilate; and Native Americans who were forcefully displaced still struggle with poverty and intergenerational trauma.

During Jackson’s presidency, Native Americans entered into over 70 treaties with the United States government, trading their land for confined reservations in the west. Many such treaties were signed by minority groups within larger Native American bands and tribes that objected to the agreements; the government enforced them anyway, turning those who resisted removal into trespassers on land they had owned for centuries. Those who tried to stay were forced to leave by the U.S. military.

Like Jackson, President Trump was a populist candidate who thumbed his nose at political “elites”—and when he came into office, Jackson’s legacy became even more prominent. As Politico reports, one-time Trump advisor Steve Bannon revered Jackson and championed him as a kind of mascot for the president. Soon, a portrait of Andrew Jackson had been hung in the Oval Office and President Trump became the first sitting president to tour The Hermitage.

In light of a nationwide movement to remove monuments to Confederate leaders from public spaces, Jackson’s history as a slave owner received new scrutiny. As monuments to figures like Robert E. Lee are removed, there’s been speculation as to whether Jackson, who is the subject of memorials throughout the United States, is next. However, none of the memorials to the seventh president have been moved or torn down—yet.

Until the culprit is found, there’s no telling what motivated the vandal. But the defacement will become part of a much bigger story—one of slavery, the disenfranchisement of Native Americans, and a nation that can’t agree on the legacy of one of its most prominent presidents.

Watch the video below: Donald Trump lays a wreath at Andrew Jackson’s grave during a visit to the Hermitage in 2017.