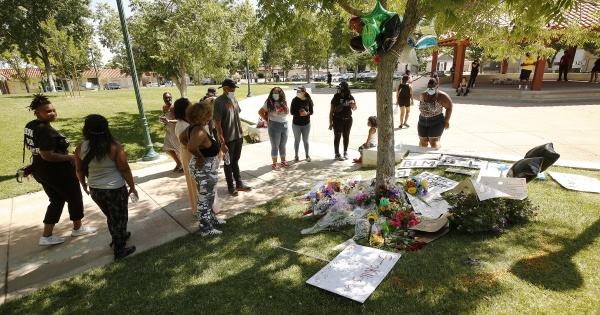 Six people of color have died by hanging in the last month. Family and community leaders fear officials have rushed to label them all suicides.

The half-brother of Robert Fuller, a Black man found dead by hanging in California last week, was killed in a police-involved shooting on Wednesday, compounding the grief and unanswered questions surrounding what appears to be a spate of hanging deaths amid nationwide protests against police brutality and racism.

Six people of color have died by hanging in the last month. And while authorities were quick to label each a suicide, family and community leaders have pushed for deeper probes, fearful of the possibility of lynchings as racial tensions continue to rise in the wake of George Floyd’s death.

“People are on edge. They are nervous. This is a troubling, a challenging time for us. It is shocking in our community, and no death in that form should go uninvestigated,” Congressman Sheila Jackson Lee (D-TX) told Fox26 this week after a Hispanic man was found hanging from a tree in Houston on Monday.

Jamon Hicks, a lawyer representing the Fuller family, said in a statement Wednesday that he “had to notify the sisters of Robert Fuller that their half-brother Terron Jammal Boone was killed by Los Angeles County sheriff’s deputies in Kern County.”

According to the sheriff’s department, who did not identify Boone, the shooting began at around 4:30 p.m. in a parking lot on Wednesday after officials began a search for “a kidnap domestic assault suspect.” Authorities identified a man matching the suspect’s description in a car being driven by a woman, with a 7-year-old female passenger.

“Detectives followed the vehicle and attempted a traffic stop," the sheriff’s department said in a statement. “The suspect opened the front passenger door of the vehicle and engaged the Deputies by firing multiple rounds at them with a handgun.”

During the shoot out, the man was shot several times in the upper torso. The female driver was struck but was later released from hospital following treatment. The 7-year-old girl was not injured.

A day before, Boone was charged with multiple criminal counts after allegedly kidnapping, pistol-whipping, and assaulting a former girlfriend at her home. The Los Angeles Times reported that the female driver was a former girlfriend and the 7-year-old was her child. At the scene, detectives also recovered a semiautomatic handgun.

While there was no initial indication that the incident was connected to the investigation into Fuller’s case, it marked another death of a Black man at the hands of law enforcement and came as the families of six hanging victims were questioning the circumstances of their loved ones’ deaths.

Since May 27, four men, one woman, and a teenage boy have been found dead by hanging in public places in Portland, California, and New York.

Fuller, 24, was found hanging from a tree on June 10 in a park near Palmdale City Hall—about 20 miles south of where his half brother was shot and killed. Authorities immediately deemed it a suicide and city officials attributed it to the emotional despair caused by the coronavirus pandemic. Alarmed residents and family members questioned the hasty conclusion.

The Department of Justice and the FBI are now reviewing Fuller’s death, after Los Angeles County officials this week walked back their original statements about the case. Jonathan Lucas, the chief medical examiner-coroner, told reporters on Monday that Fuller’s death was listed as a suicide after his office found no immediate indications of homicide.

“Initially, there wasn’t any evidence or information that lead us to believe that there was anything other than a suicide,” he said. Now, though, he “felt it was prudent to roll” those initial findings back and continue the investigation, he added.

“We felt better that we should look into it a little bit more deeply and carefully, just considering all the circumstances at play,” he said.

The Fuller family, who have stressed the 24-year-old was not suicidal, were also seeking an independent investigation and autopsy.

“To rush to the conclusion that this was a suicide and not a homicide is extremely disturbing,” Hicks, the family’s lawyer said in a statement. “Especially given the manner by which Mr. Fuller was found—hanging from a tree. For African-Americans in America, hanging from a tree is a lynching. Why was this cavalierly dismissed as a suicide and not investigated as a murder?'”

About an hour from where Fuller was found, authorities in Victorville found another Black man dead by suspected suicided 10 days earlier. Malcolm Harsch, 28 was found in a tree on May 31 near a homeless encampment. Authorities said that while an initial investigation and autopsy conducted on June 12 didn’t find any evidence of foul play, they were working with state officials to further examine the death.

“The explanation of suicide does not seem plausible. There are many ways to die but considering the current racial tension, a Black man hanging himself from a tree definitely doesn’t sit well with us right now,” the Harsch family said in a statement. “We want justice not comfortable excuses.”

One state over in Oregon, authorities are now investigating the May 27 death of Otis “Titi” Gulley, a 31-year-old who was found hanging from a tree in Rocky Butte Park. The Multnomah County Medical Examiner's Office ruled Gulley's death a suicide, but Gulley’s family fear she was killed for being queer.

“You didn’t ask any questions,” Kenya Robinson, Gulley’s mother, told the Portland Mercury, referring to the Portland Police Bureau. “You saw a Black man in a tree who was in a homeless camp, and you wrote him off as being a transient homeless, and wrote it off as a suicide.” (While Robinson used male gender pronouns for Gulley, friends told the Portland Mercury she used female pronouns and presented herself as a woman.)

In Texas, authorities were investigating the discovery of a Hispanic man found hanging in a tree around 9 a.m. Monday. Houston police said early evidence didn’t indicate signs of foul play but Congressman Jackson said she “believes there could be more to the story after an eerie pattern of recent suicides where black men were found hanging from trees.”

On June 9, the NYPD said Dominique Alexander, 27, was found hanging from a tree at around 6 a.m. in Manhattan’s Fort Tryon Park. The medical examiner’s office ruled Alexander’s death a suicide.

And on Wednesday, the Harris County Sheriff’s Office said a Black 17-year-old boy was found hanging in a tree outside an elementary school in Houston. The discovery in the playground area of Ehrhardt Elementary School occurred Tuesday night.

“Based on security video, witnesses and other evidence, preliminary indications are the male hanged himself,” the sheriff’s office said in a statement. While authorities were still awaiting autopsy results, there were no signs of foul play and the boy “had a history of suicide attempts, with one attempt as recently as a few weeks ago.”

The Los Angeles Times reported that there was no bodycam footage of the California shootout that killed Boone. Investigators have recovered footage from a Ring camera and other home video systems.

“At this time, until we receive all of the information, the family and their legal team doesn't have any further comment on this incident. The family respectfully asks that their privacy be respected," Hicks added in the Thursday statement.

If you or a loved one are struggling with suicidal thoughts, please reach out to the National Suicide Prevention Lifeline at 1-800-273-TALK (8255), or contact the Crisis Text Line by texting TALK to 741741.