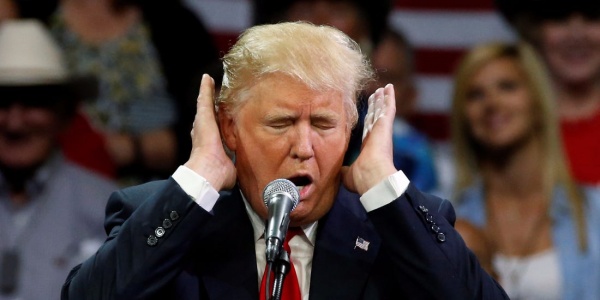 'No one wants to get fired, so no one will tell the President why he’s losing — but maybe that’s OK because none of them understand why'

One week from today, Americans will mark the 155th anniversary of the day US Army General Gordon Grainger read to the people of Texas his General Order Number 3 to inform them that “in accordance with a Proclamation from the Executive of the United States, all slaves are free”.

Grainger’s implementation of Lincoln’s Emancipation Proclamation in Texas on June 19, 1865 did not end all slavery in the United States. That day would come roughly six months later when the 13th Amendment to the US Constitution came into force. But since 1865, June 19 — the day the last persons enslaved by the defeated Confederacy gained their freedom — has been a celebrated one in African American communities across the United States.

One week from today, Donald Trump plans to mark that anniversary by delivering a speech on race relations in Tulsa, Oklahoma, where 99 years ago, what was then the wealthiest black community in the country was destroyed in what is still the worst instance of racial violence in American history.

Like most of his major addresses, the speech will have been authored at least in part by White House Senior Policy Adviser Stephen Miller, who according to leaked emails published by the Southern Poverty Law Center, has “an affinity for white nationalism”.

Later that day, Trump — who has reacted to the past few weeks of protests against racial inequality by channeling George Wallace, Richard Nixon and worse by tweeting about shooting looters, “vicious dogs,” and “law and order” ad infinitum — will continue his celebration of the events of June 19th by holding his first campaign rally since the day before Super Tuesday, Monday March 3.

That was the day he traveled to Charlotte, North Carolina and accused Democrats of “trying to politicize” the novel coronavirus which would soon bring a halt to his “Keep America Great” rallies, touted the strength of the “Trump economy,” and vowed to defeat the “radical socialist” who was then the Democratic frontrunner.

Three months on, the virus he dismissed as “politicized” has killed more than 100,000 Americans on his watch; the economy he spent the previous three years taking credit for has slipped into a recession; the “radical socialist” he’d hoped to run against has endorsed presumptive Democratic nominee Joe Biden; and Americans of all races in all parts of the country have taken to the streets to declare that Black Lives Matter.

Having been denied the opportunity to run against his preferred opponent — self-described democratic socialist Senator Bernie Sanders — and having seen the economic boom which began under his predecessor come to an abrupt ending due to Covid-19, Trump is reverting to the divisive, often-racist messaging that has been his comfort zone throughout his political career.

Perhaps in hopes of recapturing the spirit of his initial rise to political prominence — which was based on his promotion of the baseless theory that the first African American President of the United States was not a US citizen and therefore illegitimate — Trump has even adopted the rhetoric of the Confederate “lost cause” by declaring that he will veto the annual National Defense Authorization Act if it includes provisions to strip the names of Confederate generals from US military installations.

The President and his allies have long been criticized for being anywhere from unintentionally tone-deaf to intentionally inflammatory when it comes to matters of race, and not a single Trump campaign official would respond on the record to queries on how the campaign had decided that particular date and place to “reopen” the campaign in light of the weeks of protests for racial equality across the country.

One person close to the administration who did respond suggested that the rally had been added to the schedule after plans for the speech on race relations had already been worked out, and was an attempt to minimize both Trump’s and his campaign’s use of resources during the pandemic.

Asked whether he believes the campaign’s selection of Tulsa to hold a rally on Juneteenth is the unintentional result of bad decision-making or an intentional wink-and-nod to the area’s history of racial tensions, former Republican National Committee Chair Michael Steele posited that the correct answer was “both”.

“You can be intentionally dumb,” said Steele, who served as Maryland’s lieutenant governor from 2003 to 2007 and was the first African American Marylander to be elected to statewide office.

“The natural question is: Do you really want to have a huge rally in the midst of a continuing global pandemic, given that we’re now seeing spikes [in new Covid-19 cases] in that part of the country? And if you get past that, then you’re going to go to Tulsa, where the Black community there was a thriving, successful business community that was literally decimated by a racist white mob that killed hundreds of its residents?” he asked, incredulously.

“If the whole idea is that he’s gonna rebuild his relationships in the [Black] community, I just would not necessarily use that as the jump-off point to do that,” he continued, adding that the use of the Tulsa location and the June 19 date is “just astounding”.

“I just go back to my original point — you can be intentionally stupid,” he said.

Another source close to Trump and his family blamed the campaign’s lack of current messaging and scattershot strategy on campaign manager Brad Parscale — a relative newcomer to politics who has never managed a political campaign of any kind — and a campaign team composed largely of loyalists and a rising number of 2016 campaign veterans who are focusing on keeping Trump happy instead of delivering unvarnished advice.

“He’s wasting money on ads in Washington because the President complains about seeing that Conway group [The Lincoln Project] ad; the President says he wants rallies so they schedule them in places he’s guaranteed to win and doesn’t need to visit. The thinking is, if he keeps Mr Trump happy, the secret sauce of 2016 will flow and he will magically win again somehow,” they said of Parscale and much of the campaign’s top-level leadership, describing them as too sycophantic to maintain the professional detachment necessary to see when changes are needed.

But some blame, they said, rests with Trump himself, because he reacts so poorly to bad news that no one wants to be the bearer of any of it.

“No one wants to get fired, so no one will tell the President why he’s losing — but maybe that’s OK because none of them understand why,” they continued, adding later that Trump’s obsession with loyalty and disdain for most people associated with the George W Bush-era GOP has left most of the Republican Party’s top campaign talent on the sidelines or working for anti-Trump Republican groups.

Sam Nunberg, a Republican political consultant who advised Trump from 2011 to 2015, said the resumption of campaign rallies may provide some help to the president’s lagging poll numbers, but he, too, worried that the campaign has failed to adjust to the “new normal”.

“They've got to adapt and start running a highly proficient campaign that an incumbent president has the advantages to run,” said Nunberg, who added that he does not understand why the campaign has not been using its considerable war chest to blanket the airwaves with negative anti-Biden ads and positive ads contrasting Trump’s “vision for America” with that of the former vice president.

“His numbers will go up with rallies, but they're not controlling their own destiny, which is the reason why incumbents usually are able to win the presidency,” he added.

Nunberg explained that unlike 2016, when Trump ran based on his potential as a businessman, as an incumbent he is “no longer an idea” and needs to run on the record he has compiled, at least up until January of this year.

“You're not going to be able to win based on catchy slogans and themes… It has to be based on what he has accomplished, what he has shown his approach is to the economy [or] to foreign policy before Covid, and why that is better than Joe Biden’s,” he said.

Trump’s channeling of Nixon’s “law and order” rhetoric, Nunberg said, has been “a terrible approach” in the face of the protest movement that has sprung up in the wake of George Floyd’s death at the hands of Minneapolis police.

“This is not 1968,” he said. “What he has to understand is [Nixon’s use of] ‘law and order’ happened for a very important reason: We had Johnson, we had the great society, we had civil rights legislation, and then [the Watts riots in California broke out].”

“But that’s not what happened here,” Nunberg continued. “He [Trump] didn’t properly distinguish looting and protesting, which he should have. This moment is completely different, and it’s stigmatizing for how it started — there’s nobody defending those cops.”

He added that Trump’s invocation of rhetoric used by Nixon in ‘68 is ineffective because if anything, the position Trump is in is far more like that of George H W Bush in 1992 because as president, everything is happening on his watch.

Steele, too, predicted that Trump’s depiction of himself as the “law and order” savior figure he styled himself as in 2016 would fail to resonate with voters, and suggested that a “political trifecta” of Covid-19, the resulting economic collapse, and the protests sparked by Floyd’s death had stopped the president’s campaign before it ever got started, leaving with him few options but to try re-running the 2016 playbook once more.

“The reality is that the campaign and the West Wing have to face is a president who has been tone-deaf to all three events, and consequently, has spoken and behaved in a manner that has made it harder for the campaign to fashion a strategy and messaging that would actually work to the President's benefit at a time of national crisis in these three areas,” he said.

“So you fall back on what you think brought you to the dance in the first place. And that is a 2016 political narrative where you create enemies, you create boogeymen that you can go after, and that, I think is probably what you'll see.”

“He can then stand in that pulpit and he can spew whatever gospel he wants knowing that everyone in the room is applauding him and buying what he's selling, but how does that translate once he leaves the room? He doesn't care, but it makes him feel energized, and it stokes his base. And he thinks that that will get him across the finish line,” Steele said.

“But there’s not any persuasion, it’s just re-affirming old ideas around the notion that ‘I alone can fix it,’ but what have you fixed? How do you come up with a law and order argument after everyone watched the killing of a man for eight minutes and 46 seconds?” he asked.

“You don’t and you shouldn’t, but Donald Trump does, because Donald Trump is not speaking to the better angels of our American psyche.”