As Public Opinion Shifts On Racism, Trump Digs In 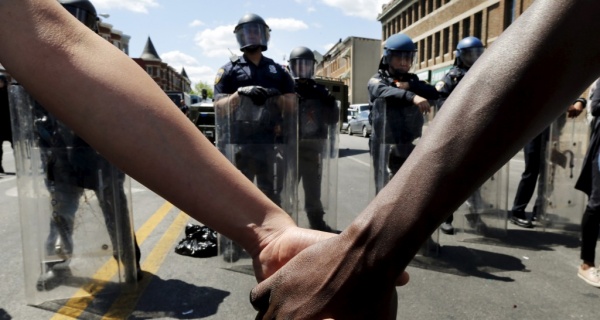 With much of the country acknowledging that protesters’ frustrations are justified, the president increasingly sounds detached from many voters in the political middle and even some of his allies.

NASCAR is demanding that its fans no longer fly Confederate flags at races. The Pentagon and some Republican senators are open to renaming military bases that bear the names of Confederate soldiers. Corporate America is taking stances against racial injustice. A majority of Americans say the police show racial bias in their use of force, and a majority of self-described conservatives acknowledge protesters’ frustrations are at least somewhat justified.

Yet with public opinion shifting quickly on racism in America, and even some of the most cautious leaders and institutions talking openly about discrimination and reconciliation, there is still one glaring outlier: President Trump.

Whether it is suggesting shooting protesters or siccing dogs on them, pre-emptively defending the Confederate names of military installations or arguing that his supporters “love the black people,” Mr. Trump increasingly sounds like a cultural relic, detached from not just the left-leaning protesters in the streets but also the country’s political middle and even some Republican allies and his own military leaders.

While Mr. Trump has a long history of making insensitive and tone-deaf comments on race, including remarks widely seen as racist, he has never appeared more isolated on a dominant social and political moment in the country, hunkered down at the White House tweeting conspiracy theories about injured protesters and describing demonstrators as “THUGS.”

He regularly uses harsh and violent language that no other American leader employs, vocally supporting the views of white nationalists and even defenders of white supremacy rather than the views expressed by majorities of Americans in polls.

“He’s talking as if this is a country in the 1950s and not 2020,” said Levar Stoney, the mayor of Richmond, Va., where a multiracial group of protesters has prompted the city and state to take down Confederate statues.

At a time when the country is confronting three overlapping crises — the coronavirus, an economic collapse and a reckoning with racism and injustice — Mr. Trump’s inability to demonstrate empathy illustrates the limitations of his political arsenal. He is well equipped to compete in a campaign where slashing negative attacks are the order of the day, and few salesmen speak in superlatives like the former hotel magnate. Yet when the moment calls for neither pugilism nor promotion, he has little to say.

Reinforcing Mr. Trump’s instincts and decisions are a small group of advisers, like those who arranged for the president to hold a campaign rally on June 19 in Tulsa, Okla. — on a day dedicated to honoring black emancipation, Juneteenth, and in a city that saw one of the worst episodes of racial violence in the country’s history a century ago.

Even if that choice of timing was unintentional, it’s hard to overlook the insensitivity over race when the president’s campaign is selling “Baby Lives Matter” onesies on its website.

On Thursday, in remarks in Dallas, Mr. Trump tried to highlight how black unemployment had fallen before the coronavirus, and noted his administration’s work on criminal justice reform. But he also falsely suggested that the protest movement seeking to “defund the police” would lead to eliminating emergency phone lines.

“I heard they want to close up all police forces,” Mr. Trump said. “It’s not like they want to sort of bring a little money into something else. They want it actually closed. I’m thinking, what happens late at night when you make that call to 911 and there’s nobody there?” That remark drew some applause, yet the substance and tone emphasized fear-mongering at a time when many Americans are grappling with how to address police violence.

The president sounds even more out of step because of the comments of some of his Republican contemporaries, who have not focused on racial justice during the Black Lives Matter era.

“We are still wrestling with America’s original sin,” said Mitch McConnell, the Senate majority leader, who has praised the peaceful protests taking place in, as he noted, his state’s cities and small towns while lamenting “the obvious racial discrimination that we’ve seen on full display on our television screens over the last two weeks.”

It is too soon to know whether Republicans like Mr. McConnell — or even large numbers of Americans — will support real action that curbs racial inequality. Mr. Trump’s allies and supporters have rallied around him, time and again. And recent polling shows that many Republicans continue to view some claims of racial discrimination with suspicion.

But this week, Democrats have introduced law enforcement overhaul legislation that goes far beyond what they have pushed before. And Mr. McConnell, recognizing the country is demanding action, tapped Senator Tim Scott of South Carolina, the only black Senate Republican, to lead an effort on how to address police misconduct.

As the G.O.P. confronts an increasingly forbidding political climate this year, the party is responding to fast-moving polling, which indicates that an overwhelming number of independents and even about half of Republican voters believe George Floyd’s killing represents a broad problem with policing.

Yet nearly five years since Mr. Trump announced his presidential campaign with the inflammatory accusation that Mexico was sending rapist migrants across the border, he is still conducting himself as if there’s a vast audience for a hard-line tone on race. And it’s wearing on even some of his most steadfast allies.

“We need to have this president and both parties say, ‘We feel your pain,’” said Bishop Harry Jackson, a black pastor who is one of Mr. Trump’s evangelical advisers. “There needs to be a discussion to African-Americans and other minorities that the loss of life historically matters. Everybody’s got to feel that from him.”

Politically speaking, Mr. Trump has long sought to align himself with law enforcement and cultural traditionalists. But if he has the support of many of them, his hostility toward the protesters has left him out of sync with many other Americans at a time when his re-election prospects are sagging.

“When I saw some of those people breaking into stores, I said, ‘Damn, stop that,’” said former Gov. James B. Hunt of North Carolina, explaining that he was worried the looting would only prompt a moderate white backlash. “But that hasn’t become the story this time. People are seeing things differently today.”

Mr. Trump has never had most Americans’ trust on matters of race, helping to explain why he’s struggled to stem the tide of a protest movement demanding racial justice.

Mr. Trump has portrayed protesters as “terrorists” and extremists while praising most law enforcement officers as “great people.” Yet in a Monmouth University poll released last week, 57 percent of Americans — including a majority of white people — said the anger that led to the protests was completely justified. Even among self-described conservatives, 65 percent said the protesters’ frustrations were at least somewhat justified.

The data is even more striking among younger people. In a new Washington Post-Schar School survey, 41 percent of Republicans over 55 said they believed the killing of Mr. Floyd reflected a broader problem. That figure grew to 52 percent among Republicans under 55, however. There is a similar generational gap among independent voters.

Part of the difference owes to the experience of millennial Christians, who grew up in schools and churches that were integrated, enjoy a more diverse set of friends and are appalled by the police violence against black men they are seeing on their screens.

“Younger Republicans want to see racial disparities fixed,” said Wesley Donehue, a South Carolina-based G.O.P. strategist. “If Republicans don’t address these issues now, we will lose the next generation of young voters, just as we have minorities.”

What’s remarkable to a number of people across the political spectrum is that Mr. Trump seems to be missing what is all but screaming in neon — clear in everything from the diverse makeup of the protesters to the legions of people sending anti-racist books to the top of best seller lists.

“It wasn’t just black people,” DeJuana Thompson, an Alabama-based activist who just returned home from marching in Minneapolis and Louisville, said of her experience. “This is a clarifying moment for our country, and people are being asked to come out of our comfort zones.”

Eleanor Holmes Norton, who represents Washington, D.C., in Congress and was active in the 1960s civil rights movement, said she had been struck by how many of the protesters in her hometown have been white.

“So many white people have taken this to heart,” Ms. Holmes Norton said.

Paul Finebaum, a popular college football talk show host, is detecting that every day on his ESPN call-in show. Mr. Finebaum has had a series of candid and at times awkward conversations about race with callers and coaches, black and white alike, in recent weeks.

“This is a watershed moment,” he said, remarking that the white people calling into his show were watching the protests “more open-mindedly than I’ve ever heard before.”

Yet on Wednesday, there was Mr. Trump, a native New Yorker, extolling the virtues of Southern heritage in making the case against changing the names of the military bases. His argument seemed even more jarring that night, when a 26-year-old black NASCAR driver, Bubba Wallace, wore a T-shirt that said “I Can’t Breathe” and drove a Chevy with “Black Lives Matter” emblazoned on the side around the Martinsville, Va., track.

Randall Woodfin, the mayor of Birmingham, Ala., is seeing changing attitudes in another conservative institution.

“C.E.O.s and leaders across corporate Birmingham are engaging their employees and saying, ‘Look, we can’t ignore this conversation, let’s make sure our values are not only in line, but let’s make sure we act on our values,’” Mr. Woodfin said.

Mr. Trump is often stilted in such discussions. And he has harbored offensive attitudes on race for years, including his searing attacks on the Central Park Five and his idea, on “The Apprentice,” for an all-white team competing against an all-black team.

As Mitch Landrieu, the former New Orleans mayor, put it: “America is grabbing white people’s faces and saying, ‘Look at this, do not turn away’ — and they’re not.”

But the most powerful white person in America is averting his gaze, and it appears more discordant by the day.