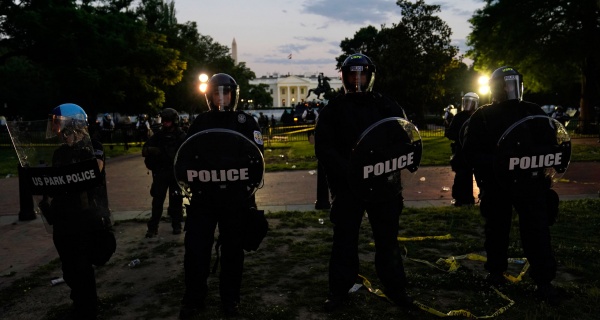 Donald Trump is a uniquely American threat to America. He has been tearing the country apart for five years. He wants Muslim bans and registries, to deport millions of immigrants, block all refugees, and turn all cops into deportation police.

Trump encourages killing Democrats, police brutality, violence at rallies, and against journalists. His dictatorial ambitions have been naked from the start, declaring “I alone” at the Republican National Convention in 2016.

It’s a recipe for the complete chaos that we now have. MAGA is a greatest hits of the worst moments in American history: the violent white backlash of the 1960s, the Great Depression of the 1930s, the 1918 Pandemic, and rumblings of a new Civil War.

Trump was never going to “Make America Great Again.” Turning the clock back is impossible. Instead he is trying to end America and replace it with a twisted vision of strongmen, white vigilantism, second-class women and Blacks, and ethnic cleansing.

High-ranking generals have warned that Trump’s fascistic theatrics could be the “end of the American experiment.” The sight of streets around the White House being turned into a war zone is disorienting for many because it’s utterly American, but an America they don’t know.

To bring about the end of the American experiment, Trump’s strategy is to bring the “war on terror” home. It’s been his standard operating procedure since he took office in 2017.

He wants soldiers and tanks to violently suppress urban protests. He gassed his own people and deployed military helicopters against them using counterinsurgency tactics. Humiliated after fleeing to his underground bunker, he has fortified the entire White House like a tinpot despot.

Trump topped it off with a vicious sword and cross moment by having peaceful protesters assaulted so he could saunter to church and paw a Bible for the cameras. When the U.S. military blanched after his grotesque photo op, saying it wouldn’t act as his personal death squads, Trump shipped in “secret police” to do his dirty work.

If this sounds familiar, it is. Trump is a low-rent version of Saddam Hussein, the former Iraqi dictator. Trump has the same monstrous ego, petty cruelty, limitless corruption, tyrannical ambitions, and thirst for a cult of personality as Saddam had.

More than a few news outlets have remarked that Trump’s fortified White House resembles the Green Zone, the heart of U.S.-occupied Iraq that managed to be even more deadly, venal, and dysfunctional than Saddam’s regime. Like the American occupiers in Iraq, Trump stokes sectarian conflict at home. Neo-Nazis are “very fine people” and armed militias invading statehouses are “very good people.” Those protesting police brutality are “thugs” and those who oppose fascists are “terrorists.”

Trump shares another trait with Saddam, his fellow coward-bully. He is shocked that millions brutalized by him have risen up against him.

The uprising was both surprising and not. It was surprising because Floyd’s death was tragically unremarkable. Oscar Grant, Eric Garner, Tamir Rice, Alton Sterling, Ahmaud Arbery, John Crawford, Walter Scott, and many others have been executed by police on camera, rarely with consequences for the executioner.

Why should one more cruel death by police have sparked a revolt that swept across the nation with protests in more than 400 cities and towns? Because Trump put the Black community under intolerable pressure.

African-Americans are dying at a staggering rate from coronavirus, 2.4 times that of white Americans. Black unemployment is 35% higher than that of whites. Blacks are 50% more likely to be essential workers than whites, increasing their risk of being infected with Covid-19. Food insecurity has soared with one-in-six Black families with children saying they are going hungry, nearly three times the rate of white families.

That was bad enough, but Trump has also tormented Black America from his thinly veiled calls decades ago to execute the falsely accused Central Park Five to years of hyping racist birtherism against President Obama. Then in 2016 Trump painted a racist caricature of Black America, “You’re living in your poverty, your schools are no good, you have no jobs.” Blacks should vote for him, he said, because “what the hell do you have to lose?”

It turns out that Black America had everything to lose. Trump has decimated their jobs, education, health, food security, and lives. Once it was clear African-Americans were bearing the brunt of the crisis, the pandemic went from national emergency to inconvenience with Trump blaring “open up.”

It’s not surprising, then, that the revolt has been led by Black youth. The Black American freedom struggle has changed the country time and again for the better, whether it was the Civil War, the Civil Rights Movement, and Black Lives Matter movement.

Black youth in the streets are the resistance we’ve been waiting for. They have put Trump on the defensive. Hunkered down in his fortress, lashing out on Twitter, Trump’s alchemical powers to spin hate into political gold are failing him, at least for now.

Trump’s wall, built to keep out Americans, not Mexicans as he promised, has also failed him. It’s been transformed into a gallery of a different America. The images, slogans, signs covering it speaks to a vision of love and justice that Cornel West painted, moving Anderson Cooper to tears.

Whatever happens in November, Trump has made history. He has ended America as we know it. Trump won last time because he offered a new path to an America mired in inequality and indifference. Trump’s path isn’t one of greatness, however, it is one of hate, violence, and a society degraded in every way.

But there is another path for America now taking shape, one of accountability, redemption, and solidarity. There will be no return to normalcy. America is over. The only question is which path do we take.