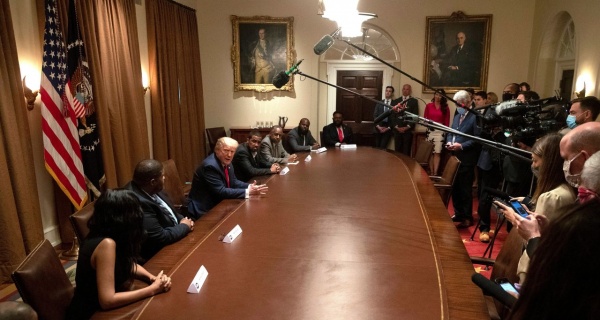 * Participant Raynard Jackson called on the media to 'quit lying'

*He called out Joy Reid from MSNBC, Don Lemon from CNN, and Roland Martin

*He accused them of 'spreading these lies about the economy you had, Mr. President, before the virus'

Donald Trump organized a roundtable Wednesday with African American supporters amid the national debate over police violence and the black community – where a participant said three prominent black media members 'are killing more black folks than any white person with a sheet over their face.'

The event mostly featured a panel of black supporters praising Trump on the economy and his efforts to address mass incarceration, although several participants took the opportunity to bash the media and President Barack Obama.

Virginia-based Republican political consultant and syndicated radio talk host Raynard Jackson took the opportunity to rip media members who were there to record the exchange – then tore into three black TV commentators.

'I'd like to say to all the media assembled here that I wish they would quit lying about what you've done specifically for the black community,' Jackson said.

'So you got radical liberal journalists like Joy Reid from MSNBC, Don Lemon from CNN, Roland Martin, who are putting more poison into the black community than any drug dealer – who are killing more black folks than any white person with a sheet over their face,' Jackson intoned.

Then he pivoted to praising Trump's handling of the economy.

'How are they doing it? Spreading these lies about the economy you had, Mr. President, before the virus, or the continuation of Obama. That's just factually not true. I have a degree in accounting. I keep up with the economy. They're lying,' said Jackson, also does PR and lobbying and who studied accounting at Oral Roberts University.

'So to all these folks on MSBNC, CNN, Roland Martin what are you afraid to have real black Republicans who know what the hell they're talking about? If you want to know the truth, if you want us to dissect the Obama economy, let's do it. And I think Mr. President your record would win the debate,' he concluded.

Trump, who was seated a few feet away in the White House Roosevelt Room, responded immediately afterward: 'Thank you very much. It's interesting you say that. You go down the list of criminal justice reform ... opportunity zones, the best unemployment rate in the history, just before the plague came in. And it's going to be back again soon.'

Trump said 'nobody's done anything like we've done' for the black community, including criminal justice reform.

'We will take the full credit, because they could not have done it without us,' Trump said. 'I'm not sure frankly that the previous administration tried. The may have,' said Trump.

'He's been my friend from the first day we met I think,' said Trump, who got along with Carson during the campaign but also attacked claims he made in his autobiography about growing up in Detroit.

'We're here obviously to talk about some of the concerns in the black community. People all around the world are making their voices heard. This is an opportune time to do something about it because this administration has already established a record of actually solving problems – problems that other people just talk about,' said Carson.

'This was an intentional stopping of the economy - of an amazing economy,' he added. 'Your philosophy, of course, has been that a rising tide floats all boats and that's why you don't spend a lot of time with identity politics. we want everybody to be successful.'

Trump said of the coronavirus: 'It was a plague that floated in from China.'

'It's been one challenge after another. But we've pressed pause and we're ready to press play now and continue in the positive initiatives regarding the black community,' he said of the economy. 'We're going to come up with some great solutions to these problems that are confronting this country.'

The event featured almost no discussion of the issue splashed across the headlines and playing out in the streets with protests over the killing of George Floyd during his arrest by Minneapolis police.

Said radio host Sonnie Johnson: 'I am probably the most Trumpish out of everybody in this room, so you are going to have to forgive me.

'The black community is not doing okay,' Johnson said. Then she made a political pitch. 'They are not going to change until we have a Republican Party that is willing to go into these communities and actually offer a choice to these communities.

Right now 'The only choice we get is either left or either further left,' she said.

'And you don't need closed police departments - do you agree with me?' Trump asked her, referencing the push to defund the police by law enforcement critics.

Ja’Ron Smith, Deputy Assistant to the President and Deputy Director of the Office of American Innovation congratulated Trump on his leadership and asked: 'How can we create better police-community relations?

'Now we have solutions. Those are things we're going to continue to work through as an administration,' he said.

The White House did not immediately respond to a question about whether Trump endorsed Jackon's comment about media members.

Watch the outrageous video below: