Trump May Compare Himself to Nixon in 1968, but He Really Resembles Wallace 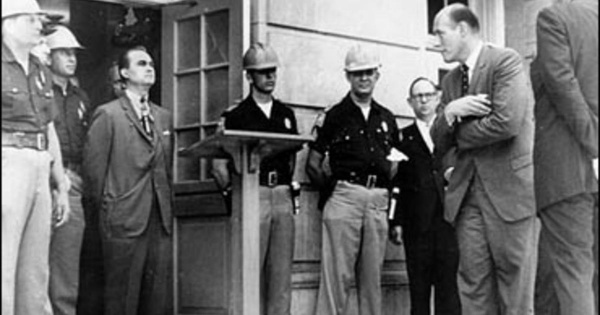 The president has employed the same kind of inflammatory language as George Wallace did in the 1968 campaign. Richard Nixon ran that year seeking the middle between the Alabama governor and Hubert Humphrey.

President Trump said last month that he had “learned a lot from Richard Nixon,” and many interpreted his hard-line response to the street protests of recent days as a homage of sorts to the 1968 campaign. The president’s Twitter feed has been filled with phrases famous from the Nixon lexicon like “LAW & ORDER” and even “SILENT MAJORITY.”

But if anything, Mr. Trump seems to be occupying the political lane held that year by George Wallace, the segregationist former governor of Alabama who ran as a third-party candidate to the right of Nixon. While he does not share Wallace’s most extreme positions, Mr. Trump is running hard on a combative pro-police, anti-protester platform, appealing to Americans turned off by unrest in the streets.

Mr. Trump’s talk of “shooting” looters, his bellicose denunciation of “thugs” and “terrorists,” his threats to unleash “vicious dogs” and “ominous weapons” and his vow to call in troops to “dominate” the streets all evoke Wallace’s inflammatory language more than Nixon’s that year. Mr. Trump has offered little empathy for the goals of peaceful protesters against racial injustice, emphasizing instead the sporadic looting and violence even as he has sought to discredit the victims of police brutality.

From the safety of his fortified White House, Mr. Trump has recirculated a Twitter post by a commentator saying it “sickens me” to suggest that George Floyd, the black man whose death under the knee of a white police officer in Minneapolis two weeks ago touched off protests around the world, be considered a martyr. And on Tuesday, he advanced a conspiracy theory aired by a broadcaster who has done freelance work for a Russian propaganda unit that implied with no basis in fact that a police assault on an unarmed protester in Buffalo was somehow a “set up.”

That sort of approach goes way beyond the 1968 campaign when in fact Nixon ran in the middle between Wallace on the right and Vice President Hubert Humphrey, the Democratic nominee, on the left. While Nixon spoke out strongly for law and order, he also spoke in favor of civil rights and preached the need for unity under a campaign slogan of “Bring Us Together.” While he condemned riots and student protesters, he marched in the funeral of the Rev. Dr. Martin Luther King Jr. and lectured suburban audiences on their obligations to help the underprivileged.

“Nixon, a really shrewd political strategist, believed that the way to victory was through the suburbs where Wallace’s raw and often violent rhetoric alienated moderate Republicans,” said Dan T. Carter, a professor emeritus at the University of South Carolina and a Wallace biographer. “He sought to carefully balance his rhetoric between supporting law and order and condemning violent protests and riots while expressing concern about the conditions of black Americans and supporting peaceful protests.”

The lessons of 1968 have become the focus of much discussion in the two weeks since the killing of Mr. Floyd touched off a raw conversation about race in America that many have compared to that traumatic year a half-century ago. Much like then, a presidential campaign is taking place amid racial turmoil and anger in the streets — exacerbated in this case by a global pandemic and economic collapse rather than the high-profile assassinations and the increasingly unpopular Vietnam War that contributed to the sense of national unraveling that year.

Unlike Mr. Trump, Nixon was not running as the incumbent but as a former vice president from a previous administration headed by President Dwight D. Eisenhower that had passed a civil rights law and sought to enforce desegregation orders in Southern schools. But the riots that followed Dr. King’s murder, the tumult of the antiwar movement, and the violence at the Democratic convention created a great sense of unease in the country that Nixon sought to exploit.

“Law and order was the No. 1 domestic issue during the campaign, even overtaking Vietnam in most polls by November,” said Luke A. Nichter, a historian at Texas A&M University who along with Douglas Brinkley has published two books on Nixon’s tape-recorded conversations. “A candidate for county dogcatcher could not run in 1968 without having a position. Even Hubert Humphrey was talking about law and order by the end of the campaign.”

Patrick J. Buchanan, who later became a famous columnist, television commentator, and three-time presidential candidate, wrote most of Nixon’s statements on law and order during the 1968 campaign and said on Tuesday that none of them were wildly controversial at the time.

Nixon came out hard against student protesters who took over the Columbia University campus that spring, and he gave anti-crime statements at most stops during a train trip through Ohio, Mr. Buchanan recalled. The candidate scoffed at the Kerner Commission report on race relations in the United States, saying that it “blames everybody for the riots except the perpetrators of the riots.”

In perhaps his most famous ad, Nixon showed images of screaming protesters and burning buildings as he intoned, “So I pledge to you, we shall have order in the United States.” But even then, historians noted, he sought to temper the message and avoid the overt racial appeals of Wallace, making sure that the faces of the protesters in the ad were white, not black.

“While R.N. was positioned as tough on law and order, he did not try to rival George Wallace, and Nixon’s campaign thrust was really ‘peace with honor’ in Vietnam and ‘new leadership’ which could unite the country,” Mr. Buchanan said by email. Referring to Ronald Reagan of California, he added, “In those years, Governor Reagan was more passionate and tougher on the law-and-order issue than R.N., who I think it is fair to say did what he had to do, but it was not why he was running for president.”

Wallace, by contrast, was happy to fire away at the protesters and did not shy away from racist appeals. Like Mr. Trump today, he talked of “anarchists” and boasted of a violent response to them should he be elected. “If any anarchists lie down in front of my automobile, it will be the last automobile they ever lie down in front of,” he said.

With the former Alabama governor in the race, Nixon all but wrote off the Deep South and concentrated instead on border states with a more subtle message to voters who might agree with Wallace, arguing that a vote for him was in effect a vote for Humphrey, an outspoken liberal and longtime champion of the civil rights movement and therefore unpopular with white Southerners.

Wallace ultimately won five states that otherwise might have gone to Nixon, who eked out a popular margin of just 0.7 percent of the vote while assembling a convincing victory in the Electoral College.

“Comparing Nixon to Trump does a disservice to Nixon, who beyond his own demons, was often a brilliant political strategist,” said Paul Stekler, the documentary maker who filmed “George Wallace: Settin’ the Woods on Fire” and founded the Center for Politics and Governance at the Lyndon B. Johnson School of Public Affairs at the University of Texas at Austin. “And in 1968, having Wallace in the race allowed him to triangulate — but it was a narrow path given how close the election ultimately was.”

John A. Farrell, the author of “Richard Nixon: The Life,” said the 37th president was both “the candidate for change as well as for tradition and order” in 1968. It was only after he won office that Nixon changed tacks, moving toward more polarizing appeals after he failed to bring the Vietnam War to a quick conclusion.

“In the fall of 1969, he decided that he could best profit by deliberately dividing Americans and pitting them against each other for his own political gain,” Mr. Farrell said.

While in the Oval Office, Nixon railed against protesters and his aides put together a program of secret domestic spying against activists. In May 1970, the White House had to be surrounded by buses to ward off demonstrations against his Cambodia incursion.

But he also wanted to reach out. One night a few days after the shooting of protesters at Kent State University, a sleepless Nixon asked to be taken at 4:35 a.m. to the Lincoln Memorial, where he talked extemporaneously with some of the young antiwar demonstrators. “I know probably most of you think I’m an S.O.B.,” he told them, by his account. “But I want you to know that I understand just how you feel.”

Still, the antipathy grew. By that September, Nixon was grousing again about the protesters to William Safire, his speechwriter. “On the kid thing — strong against bomb-throwing,” Nixon said, according to Mr. Safire’s diary. “Strong against nonsense. Let the others say that life is hard for the little bastards, that we should listen to them. We have listened before and we will listen again — after the election.”

That is a formulation Mr. Trump would probably recognize today, and he too hopes it will be a winning one.