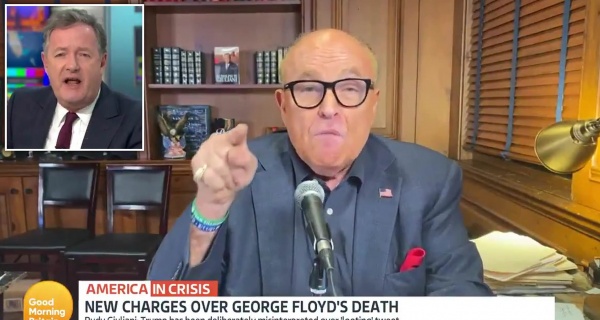 Former New York City mayor Rudy Giuliani fell out of the headlines following President Trump’s impeachment acquittal, but now he’s back. This week he called for the resignation of his successor “Mayor DiBlasio,” then went on U.K. TV to defend President Trump’s response to the George Floyd protests — though things did not go as planned. Giuliani’s Thursday morning appearance on Good Morning Britain went off the rails, ending with a heated battle with host Piers Morgan over who’s had the more pathetic fall in recent years.

The on-air clash started when Morgan criticized President Trump for tweeting, in response to unrest sparked by George Floyd’s death, “When the looting starts, the shooting starts.” Giuliani, Trump’s personal lawyer, defended the president, saying, “It’s an accurate warning. If you continue to loot, you’re going to bring about violence!”

The segment quickly devolved into personal attacks, with Morgan asking, “What happened to you? You used to be one of the most respected and revered people in America.” He added, “You sound completely barking mad … you have lost the plot, and it’s sad to see.”

Giuliani responded with a Trumpian attack on Morgan’s ratings. “Everyone in America knows you’re a failed journalist,” Giuliani said, referring to the cancellation of the TV host’s CNN show in 2014 over low ratings. “I know what happened to your show, Piers, and I remember the mistakes you made, and I remember that you fucked up.”

Both Morgan and his co-host Susanna Reid apologized to viewers for the profanity. “You’ve come on here, you’ve been rude and abusive. You sound unhinged, you’ve been using profanity and you were somebody I used to admire,” Morgan said.

However, Giuliani — who vigorously disputed media claims that he said “bull****” during a live appearance on Fox & Friends last summer — insisted that he actually said “sucked up.”

“What profanity did I use, liar?” Giuliani said. “I didn’t use any profanity … You tell me the profanity I used. That’s exactly what you do to President Trump. It’s disgraceful.”

As for Giuliani and Morgan’s core disagreement over who’s had a more embarrassing run in the past few years, can’t they both be right?