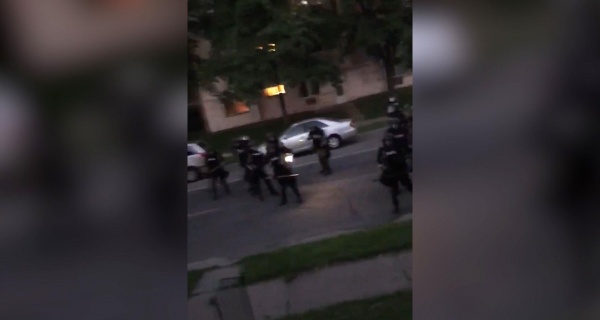 A video posted to Twitter Saturday night is going viral after apparently showing law enforcement in Minneapolis shooting paint rounds at residents on their porch after the curfew went into effect.

Tanya Kerssen posted the video to Twitter shortly after 9:30 p.m., showing what she says is the Minnesota National Guard and Minneapolis police sweeping her residential street in the Whittier Neighborhood.

In the video, the officers are seen approaching the residents and repeatedly yelling at them to get inside their house. After a few demands, one can be heard yelling “light ‘em up!” That’s when one officer appears to fire a paint round at the residents, who run inside.

Meanwhile, a WCCO photographer was struck by a rubber bullet and arrested by the State Patrol Saturday night. He was released from custody after a couple hours.

The curfew went into effect at 8 p.m. in Minneapolis.