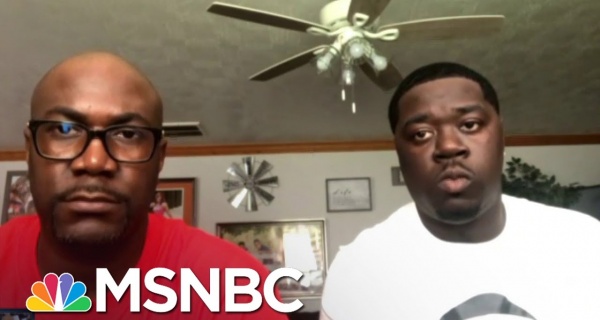 "I love my brother. I'm never going to see him again," Philonise Floyd said as he fought back tears

Philonise Floyd is speaking out after the death of his brother George Floyd, the black man whose fatal encounter with police was caught on-camera, with viral footage sparking widespread outrage on social media.

As protests erupt across the country, Floyd virtually spoke with MSNBC's Al Sharpton on Saturday and talked about the conversations he had with President Donald Trump and former vice president Joe Biden, who is the presumptive Democratic nominee in the 2020 presidential election.

"I never had to beg a man before but I asked [Biden] could he please, please get justice for my brother, please. Because I need it, I just don't want to see him on a shirt like those other guys. Nobody deserves that," said Floyd, who was joined by his nephew Brandon Williams and their family attorney Ben Crump.

Meanwhile, Floyd said his call with Trump was much different.

"It was so fast. He didn't give me the opportunity to even speak. It was hard. I was trying to talk to him but he just kept like pushing me off like 'I don’t want to hear what you’re talking about.' I just told him I want justice. I said that I can't believe that they committed a modern-day lynching in broad daylight," he shared.

"I can't stand for that, that hurt me. I just don't understand, man," he said as he became emotional and fought back tears. "Why we have to go through this? Why we gotta have all this pain, man? I love my brother. I'm never going to see him again."

A spokesperson for the White House did not immediately respond to PEOPLE's request for comment.

Trump, who was in Florida for the NASA-SpaceX launch, made remarks about his phone call with Floyd during a speech at the Kennedy Space Center on Saturday.

"Yesterday, I spoke to George's family and expressed the sorrow of our entire nation for their loss. I stand before you as a friend and ally to every American seeking justice and peace, and I stand before you in firm opposition to anyone exploiting this tragedy to loot, rob, and menace. Healing not hatred, justice not chaos are the mission at hand," the president said.

"I understand the pain that people are feeling. We support the right of peaceful protests and we hear their pleas, but what we are now seeing on the streets of our cities has nothing to do with the memory of George Floyd. The violence and vandalism is being led by Antifa and other radical left-wing groups who are terrorizing the innocent, destroying jobs, hurting businesses and burning down buildings," Trump said. "The main victims of this horrible, horrible situation are the citizens who live in these once-lovely communities... The mobs are devastating the life's work of good people and destroying their dreams. We support the overwhelming majority of police officers who are incredible in every way and devoted to public service."

Also during the MSNBC interview, Floyd gave his thoughts about former officer Derek Chauvin and the other police officers in the nine-minute video, which shows Floyd's brother George groaning in pain while bystanders plead with Chauvin to be more gentle as he repeatedly asks for help.

"They all need to be convicted of first-degree murder, and given the death penalty because they didn't care about what they wanted to do with my brother. He wasn't a person to them, he was scum. He was nothing," he told Sharpton. "I can imagine how many people they did like that. I don't need them on the streets to kill anybody else. I'm hurt, my family is hurt. His kids are hurt. They will grow up without a father. Everybody is crying and in pain right now. So if they could do anything please arrest those other officers."

Hennepin County Attorney Mike Freeman, whose office would prosecute the case, said at a recent press conference that his office is still investigating the case and that the video of Chauvin putting his weight on George's neck is "graphic, and horrific and terrible, and no person should do that."

Sharpton said he will be traveling to Minnesota "soon to officiate and deliver eulogies at George Floyd's funeral."
Watch the video below: