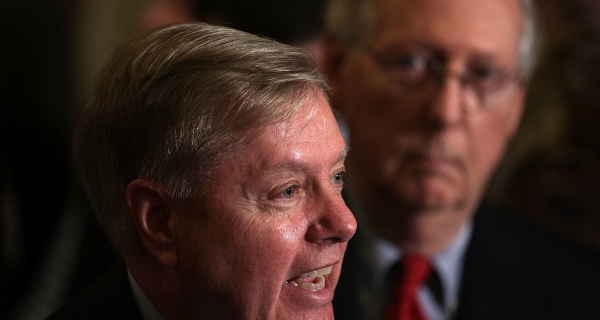 Sen. Lindsey Graham (R-S.C.) made a public plea to senior citizens on the federal judiciary, encouraging eligible federal judges to take senior status and allow President Donald Trump and Senate Republicans to install more young, conservative-minded jurists on the bench for a lifetime.

Graham, the chairman of the Senate Judiciary Committee, made the comments during a Thursday morning interview with conservative radio host Hugh Hewitt.

Hewitt asked Graham if he knew of any federal judges who were eligible to assume “senior status,” a type of semi-retirement available to judges over age 65 who continue to preside over cases, albeit with a reduced workload. A National Review article from 2017 (“A Better Way to Give Trump More Judgeships to Fill”) helpfully explained why this matters:

“If you are [eligible], take it,” Graham said on Thursday, in case any federal judges were listening to the broadcast or in case they might eventually read the news coverage about it.

“Well, so the point is, and this is an historic opportunity. We’ve put over 200 federal judges on the bench. I think one in five federal judges are Trump appointees. If you can get four more years, I mean, it would change the judiciary for several generations. So if you’re a Circuit judge in your mid-60s, late 60s, you can take senior status, now would be a good time to do that if you want to make sure the judiciary is right of center. This is a good time to do it.”

Trump, who made the appointment of conservative judges a central part of his presidential campaign, has already seen 194 federal judges confirmed by the Senate, second only to President Jimmy Carter’s 208 confirmed judges.

Graham also said he was “sure” that Senate Republicans would try to fill any U.S. Supreme Court vacancies that may arise before the November presidential election, repudiating the “precedent” he previously said should dictate any future appointments in the final year of a president’s term.

“I think that would be the goal,” Graham said when asked if Senate Republicans would try to confirm “one or even two” vacancies on the High Court.

“I mean, you know, the Merrick Garland situation was a party in the White House and a different party in the Senate. That doesn’t lie here. Election year confirmations would be contentious, but you know, the Democrats changed the rules so they could pack the Circuit Court. They did away with the blue slips requiring a majority vote for Circuit Courts. We changed the rules for the Supreme Court. So if a vacancy did occur, and I don’t expect one to, I hope everybody has a long, healthy 2020 on the Court, that you would see an effort by Republicans, I’m sure, to fill the vacancy.”

Graham said in 2016, however, that the GOP’s decision to block Garland’s appointment should apply to Republicans in the future.

“We’re setting a precedent here today — Republicans are — that in the last year at least of a lame-duck eight-year term, I would say it’s going to be a four-year term, that you are not going to fill a vacancy of the Supreme Court, based on what we are doing here today,” he said. “That’s going to be the new rule.”