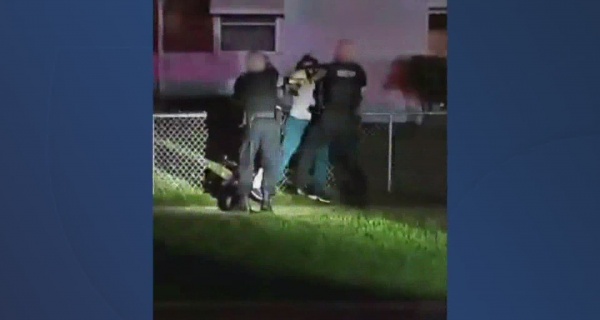 A video of a white Washtenaw County sheriff’s deputy appearing to punch a black woman in the head multiple times during an arrest early Tuesday has sparked outrage and an internal police investigation.

Deputies ordered Sha’Teina Grady El and her husband, Dan Grady El, to leave the scene of a potential shooting in the Apple Ridge neighborhood of Ypsilanti Township around midnight on May 26, said the Washtenaw County Sheriff’s Office. When officers tried to physically remove the two from the scene, they resisted, and a deputy punched her in the head before taking both into custody, police said.

The two are lodged at the Washtenaw County Jail and have yet to be arraigned on charges, police said. The couple’s daughter Jaquisy Diggins confirmed it is her mother who was struck.

Multiple deputies had responded to the shots fired report at the 2000 block of Peachcrest Street, and officers arriving on scene found a 34-year-old female gunshot victim that required medical attention, police said. She was in stable condition as of Tuesday afternoon, police said.

While investigating the scene for a shooter, deputies formed a perimeter to keep community members away from a potential shooter, police said. All residents but the Grady El’s complied with the order, police said. Resident Tovah Taylor said the couple was asking officers why they were in the neighborhood.

The situation escalated after the couple started “obstructing” the deputies from establishing the perimeter, Washtenaw County Sheriff Jerry Clayton said. One deputy started punching Grady El in the head, while another deputy deployed a taser on her husband, the video shows.

“There is absolutely no doubt, and no argument from me, that the images in the video are disturbing,” he said. “It warrants a complete investigation.”

The deputy shown punching Grady El has been placed on administrative leave, Clayton said, which is paid due to sheriff’s office union requirements. The name of the deputy is not being released at this time to facilitate a fair internal investigation, Clayton said.

“We are finders of facts,” Clayton said. “We want to seek the truth, find the facts, and provide all the context. What was going on, what was the specific resistant behavior, what was the officers attempts at use of force. We’re going to respond to that.”

Other staff involved with the incident were also placed on administrative leave pending an investigation, police said. An external agency will review the internal investigation’s findings, police said, and “use of force” training will be conducted.

The sheriff’s office will try to be as forthcoming as possible about the investigation, Clayton said, as long as it is respectful to the Grady El’s and the deputy on leave.

The video circulated on social media Tuesday, leading to a protest organized by Trische’ Duckworth, founder and executive director of the nonprofit Survivors Speak. About three dozen residents marched outside the Washtenaw County Sheriff’s Office headquarters, 2201 Hogback Road, protesting the altercation and the fact that the Grady El’s are still incarcerated.

“We cannot continue to allow this,” Duckworth said. “What happens next? Is someone going to die next? Are they going to do this to child? There’s just so much that can happen, so we have to take a stand.”

She and the protesters moved inside the sheriff’s office building after about a half-hour of chanting “No Justice, No Peace" and more. Clayton addressed them inside to inform them that the officer was placed on leave and that Grady El is under medical supervision for any injuries suffered in the incident.

Clayton also spoke with Nate Frazier, a community leader and founder of the nonprofit Heart to Heart, about the incident and answered some preliminary questions about the investigation.