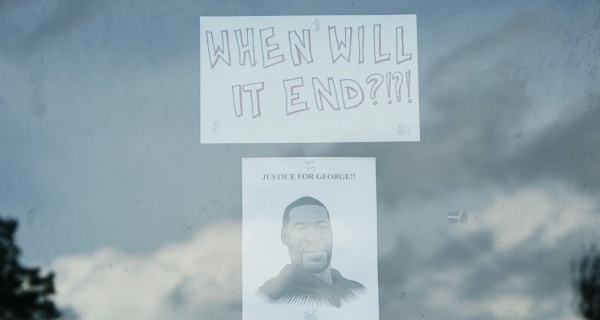 “I can’t breathe” were some of the last words that a handcuffed George Floyd said as he was pinned on the ground, while a white Minneapolis police officer held a knee to his neck for several minutes on Monday. Floyd, a black man, is now dead.

Now the four officers from the Minneapolis Police Department involved in the incident have been fired. Police Chief Medaria Arradondo announced their terminations during a news conference Tuesday afternoon. He did not publicly identify the officers.

Tensions on social media are flaring across the country since video of the incident was published to Facebook early Tuesday morning. Floyd’s distressed calls went ignored by the police.

Bystanders begin to crowd around and one man says, “Bro, you got him down, let him breathe at least.”

Three minutes into the video, Floyd’s body becomes motionless as the officer continues to apply his knee on the man’s neck. Paramedics were called, but the officer didn’t stop applying pressure to Floyd’s neck until he was lifted onto a stretcher. Floyd was declared dead at a nearby hospital soon after his arrest.

Police said Tuesday that Floyd died of a “medical incident” after police responded to a report of a forgery in progress on Monday.

Critics dispute this rationale, and now local officials are calling for answers.

Minneapolis’s NAACP chapter described the act as a “cruel display of ... state-sanctioned murder.”

“If you look at the state of Minnesota holistically, we have some of the worst racial disparities in the country, and the police department is not an exception,” chapter president Leslie Redmond told Yahoo News. “I want to be very clear, we are not dealing with a civil rights issue, we are dealing with a human rights issue. … We fear for our lives, and our humanity is disregarded. [Floyd] did not have to die.”

At a Tuesday morning press conference, Arradondo asked for a federal probe into the incident after seeing the video and receiving “additional information” from officers involved in the arrest.

“There was additional information that I had received that, quite frankly, from community sources, that just provided more context than I had preliminarily,” Arradondo said.

The Minneapolis Police Department did not return a request for comment from Yahoo News.

At the same press conference, Frey, the mayor, said race played a role in the incident. “Being black in America should not be a death sentence,” he said. “For five minutes, we watched a white officer press his knee into a black man’s neck. Five minutes. When you hear someone calling for help, you’re supposed to help. This officer failed in the most basic, human sense.”

The incident stokes painful memories for many locals of the fatal police shooting of 24-year-old Jamar Clark in 2014 during a confrontation at a birthday party. The killing set off protests outside a local police precinct that lasted 18 days.

Longtime Minneapolis resident Dave Dicking said that in his 48 years in a city generally regarded as liberal, he’s observed a long history of discrimination. “There are a lot of things done on the surface to look good … but it doesn’t make a difference for black working class who bear the brunt of police brutality, and it’s gone on forever,” said Dicking, who is a board member for Communities United Against Police Brutality. “We have a liberal City Council, and they cater to downtown folks with money and not the constituents.”

Dicking also noted a trend of black flight from the city in recent years. He said police brutality is partly to blame for the black population leaving, but also police inaction. Sometimes police don’t show up at all. “A large part of it is the lack of police service,” he said. “They could care less what happens to those folks.”

Minneapolis police spokesman John Elder would not elaborate on whether Floyd had any preexisting medical conditions, but said that he appeared to be under the influence of alcohol or a narcotic.

Elder added that the technique used by the officer was not a department-authorized chokehold.

“In my years as an officer, that would not be what I would ever consider a chokehold,” Elder said.

Police say the officers’ body cameras were recording during the incident and all the footage has been turned over to the Minnesota Bureau of Criminal Apprehension, which investigates police shootings and in-custody deaths.

Rep. Ilhan Omar, D-Minn., wrote on Facebook that the senseless killings of black people “must stop.”

Civil rights attorney Benjamin Crump, who was retained Tuesday by the family, likened this police-involved incident to that of Eric Garner, a black man killed by an officer on Staten Island, N.Y., in 2014 as a result of an illegal chokehold. “Forgery is not a crime punishable by death,” Crump wrote on his Instagram page, where he posted the video of Floyd. “This is not only police brutality, it is MURDER! First Eric Garner, now this from Minneapolis PD.”

As the investigation into the arrest and death of Floyd begins, Mayor Frey made clear his view of the officers’ actions: “Whatever the investigation reveals, it does not change the simple truth. He should still be with us this morning.”