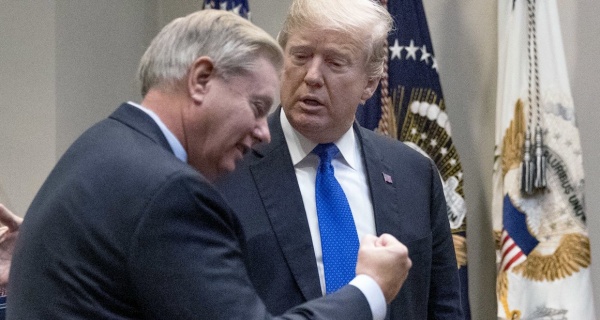 The 81-second spot slams the South Carolina Republican as “spineless,” “shameless” and “dangerous.”

Footage of Graham blasting Trump as a “jackass,” “kook,” “crazy” and “unfit for office” before the 2016 election is juxtaposed with clips of him later lavishing praise on the president, even calling for him to receive the Nobel Peace Prize.

The 81-second spot, produced by the new Democratic LindseyMustGo super PAC, slams the senator as “spineless,” “shameless” and “dangerous” and calls for him to be voted out of office in the November election.

Check out the ad here:

“We’re simply tired of his snarling, revengeful, dirty payback politics down here and I promise you we will do whatever we legally can to make his last nine months in the U.S. Senate a miserable hell,” former MSNBC contributor Jimmy Williams, a senior adviser to the PAC, told The Washington Post.

It’s not the first time that Graham’s astonishing reversal on Trump has come under scrutiny. The Intercept’s Mehdi Hasan in January showed why Graham is “the most shameless man in American politics” with this montage:

A mocking Twitter account pretending to be the lawmaker’s conscience was launched by a video editor at the conservative news website The Bulwark. And Hillary Clinton suggested Graham had “a brain snatch” in order to perform his Trump U-turn.