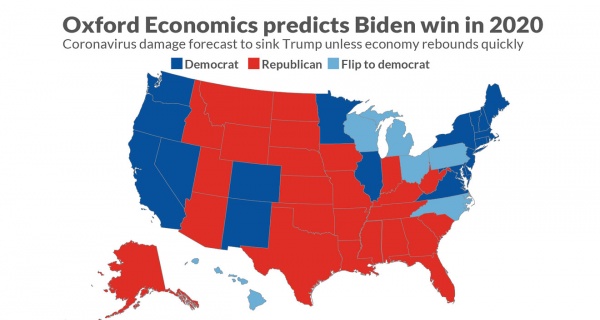 *He would also take Ohio, Iowa, and Missouri in the mid-west as well as North Carolina - although not Arizona, which is a major Democratic target

A new model has predicted that President Trump will lose the 2020 election by a landslide due to the floundering economy amid the coronavirus crisis.

The national election model released by Oxford Economics on Wednesday predicted rising unemployment and inflation will prevent Trump from being reelected.

The study predicted that the president would win just 35 percent of the popular vote, which marks a sharp turn-around from the group's pre-coronavirus prediction which put Trump at winning 55 percent of the vote last fall.

In 2016 he lost the popular vote, gaining 46.2 percent to Hillary Clinton's 48.1 percent, but secured victory by taking Michigan, Wisconsin, and Pennsylvania by razor-thin margins, and Florida too.

In contrast in November, Oxford Economics predicted the coronavirus recession will see the president suffer a 'historic' defeat, common for sitting presidents running for reelection amid an economic crisis.

The model suggests he would keep Florida but lose his other gains, then lose Iowa and Missouri too.

'It would take nothing short of an economic miracle for pocketbooks to favor Trump,' the report concluded.

The model has proven accurate in its predictions every year since 1948, except for 1968 and 1976, and works off the assumption that the U.S. economy will not have bounced back from the pandemic by this autumn, with unemployment rates above 13 percent, and household incomes six percent lower.

'The economy would still be in a worse state than at the depth of the Great Depression,' the report said.

'An unemployment rate above its global financial crisis peak, household income nearly 6% below its pre-virus levels, and transitory deflation will make the economy a nearly insurmountable obstacle for Trump come November.'

According to the group, the economic factors point to a clear Democratic win come November, although voter turnout and the evolution of the pandemic could be crucial in determining which way it will swing.

The model is based on GDP falling by 4% by the end of 2020 compared to 2019, the Washington Post reported - although that figure is itself optimistic and assumes a strong recovery in the second half of the year.

The model is close to, but not perfectly aligned with, aims set out by Biden's campaign last Friday.

It said it was betting that as many as 17 states could be up for grabs in November's election, with President Donald Trump's coronavirus response making places like Arizona more competitive. In contrast Oxford Economics predicted the sunbelt state would stay red.

O'Malley Dillon included Arizona, Texas, and Georgia among states that have been inhospitable for Democrats but that could power the former vice president to success.

The Republican incumbent enjoys advantages of his own in the race, including fundraising and digital campaigning.

Trump's team has been working for months on plans to make a push for states seen as Democrats' home turf, such as Minnesota.

Biden has been restricted to campaigning from his Delaware home, where he is isolating due to the coronavirus.

Some of his efforts to reach out to voters, including online events in states critical to deciding the election, have been beset with technical difficulties.

'Americans know that President Trump has been leading the nation in fighting the coronavirus, and they also know that Joe Biden has been nothing but a political crank, lobbing counterproductive criticisms from his basement bunker,' Trump campaign spokesman Tim Murtaugh said.

Trump trailed Biden 38% to 46% among registered voters in the latest Reuters/Ipsos opinion poll released on Tuesday.

Trump managed to overcome a polling deficit in 2016, beating Democratic candidate Hillary Clinton by relatively small margins in key states to win the Electoral College while losing the popular vote.

The Biden campaign also concedes that some voters, including white voters without college degrees, black men, and Latino men, have grown less supportive of Democrats in the last decade but think Biden's working-class message can win them back.

Murtaugh said Trump would work to increase his support among black and Latino voters.

Biden's policy positions, Murtaugh added, would cause the Democrat to lose support in key states like Pennsylvania, Michigan, and Wisconsin.

O'Malley Dillon however said the campaign will hire by June at least 600 field staffers dedicated to an 'expanded map' of battleground states.

She expects the new workers to be 'on the ground' and reaching out to voters face to face as social distancing guidelines during the coronavirus pandemic change before Election Day in November.

But she made no commitment for when that will be, and she reaffirmed that the campaign has no established timeline for when Biden will return to regular campaigning.

THE STATES BIDEN BELIEVES ARE IN PLAY

Nebraska (one of its five electoral college votes)