Whoopi Goldberg Confronts Chris Christie on ‘The View’: Who Are You Willing to ‘Sacrifice?’ 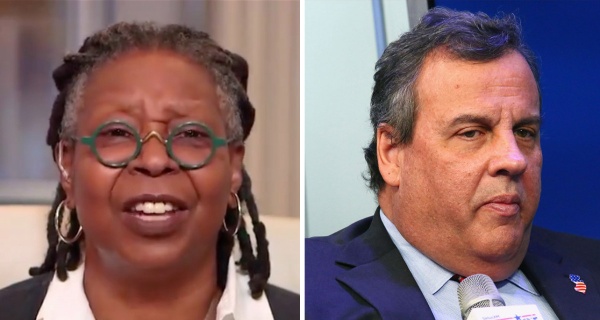 “Who are you willing to give up in your family?” the “View” host asked him.

Former New Jersey governor and current ABC News contributor Chris Christie got more than he bargained for on Friday morning when he joined The View to make his case for “reopening” the country in the face of the coronavirus pandemic.

“You upset a lot of people saying the country needs to reopen because people are going to die no matter what,” Whoopi Goldberg began when Christie appeared in the box next to her. “You compared it to lives lost in World War II, calling it a sacrifice for the American way of life. So I’m asking, since you’re suggesting that I sacrifice, who are you sacrificing? Who are you willing to give up in your family?”

“Whoopi, that’s not what I said,” he replied. “Lives are going to be lost in this inevitably, no matter what we do. Lives are being lost today after we’ve been shut in for nine weeks.”

Goldberg interrupted him once more, asking, “You didn’t say that some Americans have to make the ultimate sacrifice? You did not say that?”

For the record, Christie’s full comments on Dana Bash’s CNN podcast last week were, “We sent our young men during World War II over to Europe, out to the Pacific, knowing, knowing that many of them would not come home alive. And we decided to make that sacrifice because what we were standing up for was the American way of life. In the very same way now, we have to stand up for the American way of life.”

While Christie said he thinks some basic safety measures like wearings masks and implementing temperature checks should be used, he told Goldberg, “If we wait around for a vaccine to occur before we open our country, we will lose countless hundreds of thousands of lives of people who are being destroyed by the epidemic’s cure, as we’re doing it now.”

For the rest of the segment, Goldberg’s co-hosts continued to press the former governor, who argued that we cannot “allow the virus to control when we reopen.” By the end of his appearance, Christie was striking a more conciliatory tone, making the case that “nobody should be talking about the politics” of the pandemic.