Congressional Witness: ‘I’m a Republican. I Voted for President Trump … I Am Embarrassed’ 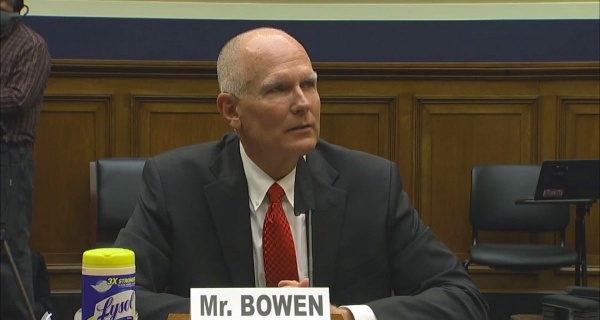 Mike Bowen, executive VP of a surgical-mask manufacturer, was clearly holding back tears at one point while describing being inundated with requests for masks: “I can’t help all these people”

After Dr. Rick Bright, a whistleblower and now-ousted director of the Biomedical Advanced Research and Development Authority, gave headline-grabbing testimony before Congress on Thursday, a medical supplier whose earlier warnings about the federal government’s meager stockpile of medical equipment also delivered important testimony.

Mike Bowen, the vice president of surgical-mask manufacturer Prestige Ameritech, spoke emotionally about his more-than-a-decade-long frustration with trying to get the federal government to change course and curb its increasing dependence on masks produced in China and Mexico. Bowen claims a lack of action by three administrations helped lead to shortages that ultimately cost lives during the early stages of the coronavirus pandemic in America.

“I’ve said for years we can’t wait until a pandemic happens before we do something about it,” Brown told the House Energy and Commerce Subcommittee on Health.

At one point, Bowen was clearly holding back tears while describing being inundated with requests for masks. “I can’t help all these people,” he said.

Bowen was quoted by Dr. Bright during Thursday’s hearing, who said that the medical supplier had emailed him in January warning about the “completely decimated” supply of N95 respirators and the government’s refusal to ramp up production. In the email, Bowen wrote, “We are in deep shit, the world is.”

Bowen went on to emotionally address the partisanship he saw when the committee questioned portions of Bright’s testimony. The medical supplier said he admired Bright’s willingness to be a whistleblower.

Bowen continued, ” I am a Republican. I voted for President Trump. I admire Dr. Bright. I don’t know what he did in all of his other activities, but I think everything I’ve heard and every time I’ve talked to him, everything he said here made a lot of sense, and I believe him.”

When Bowen was asked directly about the Trump administration’s lack of action, downplaying of the pandemic, and mistreatment of Dr. Bright, Bowen admitted that truth made him “embarrassed” as a Republican.

“Now that you ask, again, I am a Republican, have been a lifelong Republican. I am embarrassed by how that’s been handled,” he said.

The medical supplier went on to then state what should be obvious but, unfortunately, is seemingly not.

“It is the scientists we need to be listening to and we are not. That has got to change or more lives are going to be lost,” Bowen said.