How The President Lost One Of His Fiercest Supporters 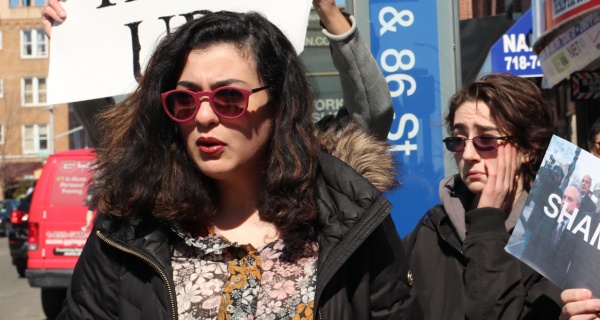 Brooklyn’s passionate young conservative activist is no longer conservative. And she is no longer a Trump supporter. And she’s currently stuck in Israel during the coronavirus pandemic. Remember Batya Goldberg?

We spoke with Goldberg, 19, in September of 2017 for a profile. At the time, she was 16-years-old and the president of the Brooklyn Teen Republican Club. She remembered telling us she created the club right after Donald Trump was elected president. “… If he can do that, why can’t I, Batya Goldberg of Brooklyn, New York, start a club that can actually make a difference in teenager’s lives and help them express their political curiosities, and help them get active in the community and lead them towards creating a better future for themselves?”

Throughout her years as a young Republican, Goldberg, a Midwood resident, has been the secretary at the Reagan Republican Club of Brooklyn, the director of operations for District Candidate Steve Saperstein’s campaign, and has co-hosted the 43rd City Council Republican debate with the Brooklyn GOP which packed the Bay Ridge Manor. In March of 2018, she organized the protest against then-Assemblymember Pamela Harris, calling her to resign after she was indicted in January on 11 a host of charges.

Two and a half years later, so much has changed.

Since Goldberg graduated from high school, she decided to take a gap year before she began college. She had been spending her days volunteering in various places, and soon found herself in Israel, which she had intended to go to before traveling across Europe. She’s been there since February, and now, because of the pandemic, does not know when she’ll be back.

“I volunteered at an amazing restaurant in Haifa for one month, called Robinfood, whose goal was to use food that would have otherwise been thrown out (produce surpluses from farmers and markets, etc). After volunteering there for one month, everything got shut down due to coronavirus in early March.”

She acknowledged that Israel’s response to the coronavirus was “very much opposite to the U.S. response.” She said it was “quick and strategic.”

“They began with banning visitors coming in from China, then Italy, then Europe, and then shortly all international tourists in a matter of weeks. The country went into quarantine very soon after. Bus drivers were not permitted to take cash, the workforce got cut down severely, and schools were canceled,” Goldberg said. “The result of this hastened reaction has led to there being fewer cases of COVID-19 [compared to the U.S.] in Israel and few deaths.”

She said she believed that if Trump acted faster, the “situation in the U.S. would have been much better.”

Speaking of Trump, she is no longer one of his biggest supporters. Her discontent with him began to accumulate slowly. It started when she began to question his “very fine people on both sides” comment about the violent white supremacist rally in Charlottesville, Virginia. Then, Goldberg felt herself not being able to comprehend “how he could morally, as a president of the greatest free nation in the world, allow himself to take actions such as separating illegal children from their parents, completely go against the advice of his politically experienced advisors on issues such as dealing with the Kurds, and make a joke out of America in the eyes of the world every single day with his obscenely inappropriate tweets.”

And just like that, the president lost one of his fierce young advocates.

“I believed in many principles of the Republican party that unfortunately are not even relevant anymore seeing as the Republican party has been taken over by the Trump agenda– not a conservative agenda, not a Republican one, not a constitutional one, but a Trump one,” Goldberg explained. “Now, having different very different political views, although some of my stances have not changed, especially in regards to my support, or lack thereof, of Trump, I look back and know full heartedly that I supported him for the right reasons.”

“I am happy that unlike many of his supporters, instead of condoning many of his unpresidential actions, I decided to take a stance against them, even if that meant giving up everything I had worked for.”

Since she has left the Party in 2018, many of her friends left with her. Goldberg was under the voting age when she was involved with the GOP, therefore, she was never registered as a Republican. When she turned 18, she registered as a Democrat.

Since then, there have also been people attacking her for doing so. People from all over the country find her on social media and call her “fake” and “phony” for “flipping against Trump.” She acknowledges that she had always gotten such comments, even before she left the GOP when she would call out the president on minor issues.

“After I left the GOP and stopped supporting Trump the comments became even cruder and worse,” she said. “So much for tolerance and democracy.”

But still, Goldberg doesn’t regret a thing. She believes she got off the “Trump Train” at the most perfect time.

“If America learned anything from COVID-19, it is exactly why a person like Trump should not be president,” she said. “Many Trump supporters discount Trump’s inappropriate statements and tweets saying they don’t mind that he ‘says what he feels’ as long as he gets the job done and ‘Makes America Great Again.’ Some even feel that his willingness to be crude and unpresidential is great for American foreign and national affairs.”

“However… Trump, from the beginning of the outbreak, has discounted and downplayed the virus and turn the blame on everyone but himself after the virus hit America. From comparing COVID-19 to the flu, to proclaiming he has total authority over states reopening, to telling people they should ingest disinfectants, Trump has turned the American response to this crisis into a joke.”

Goldberg iterated that she is incredibly grateful for her experiences working in politics. One thing that will never change is her love for politics– especially local politics– and she encourages everyone to get involved.

“Right now we are living in times of uncertainty and one thing we must certainly all do as citizens of the U.S., whether or not we are involved, is to hold our government accountable,” she said. “Regardless of political affiliation, Americans should not feel threatened to call out elected officials when they are wrong, especially in times of national emergencies.”

And that is what she will continue to do.