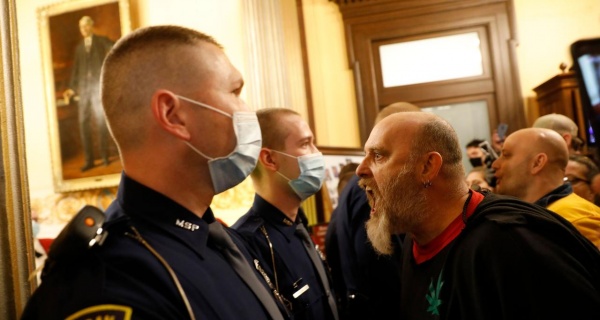 "Trump is using a tactic of authoritarians who pretend that they have no influence over the actions of private militias or thug squads. This is failed state stuff right here."

Stirring memories of the time he called racist neo-Nazis "very fine people" after a demonstration in Charlottesville, Virgina that left one person dead in 2017, President Donald Trump on Friday referred to armed right-wing extremists that descended on Michigan's state capitol building Thursday as "very good people" who should be negotiated with.

"These are very good people, but they are angry," the president tweeted.

"'Very good people' don't arm themselves to the teeth and show up in full military cosplay at their legislature to intimidate elected representatives," replied web developer and author Morten Rand-Hendriksen. "Very good people help their communities, support essential workers, and take part in the democratic process."

The president's call for Whitmer to negotiate with the protesters was part of an effort from the White House to get Americans back to work and allow the economy to rebound in time for Trump's re-election bid.

As Politico explained, public health officials remain dubious such a move is the right one:

But even as some parts of the country appear to be past their peak of infections, public health officials have continued to warn that the U.S. coronavirus testing operation is not yet substantial enough for a widespread reopening. Officials have also warned that moving too quickly to restart normal life in the U.S. could spark a resurgence of cases.

As Common Dreams reported, the images of the mainly white male group carrying rifles and automatic weapons generated commentary from progressives calling the striking visuals an example of "America in the age of Trump."

Critics of the president were quick to draw the parallel between his remarks Friday and his comments about the Charlottesville demonstrations during which 32-year-old social justice activist Heather Heyer was murdered by a white nationalist.

In 2017, Trump notoriously said that demonstrators at the violent Unite the Right white supremacist gathering in Charlottesville, Virginia, were "very fine people," despite the fact an avowed neo-Nazi committed a violent murder at the event. Trump and his allies have since tried to rewrite history about his "fine people" remarks, arguing that the comment was taken out of context.

"I think we have a different definition of 'very good people,'" tweeted the Coalition to Stop Gun Violence.

Economist Marshall Steinbaum, in a tweet, opined that the president's comments were the result of over two years of no pushback on racism and bigotry from both Trump and the extremist groups that he supports.

"It's only gotten worse," said Steinbaum, "because he and they have faced no meaningful opposition."

"Trump is using a tactic of authoritarians who pretend that they have no influence over the actions of private militias or thug squads," tweeted Scahill. "This is failed state stuff right here."