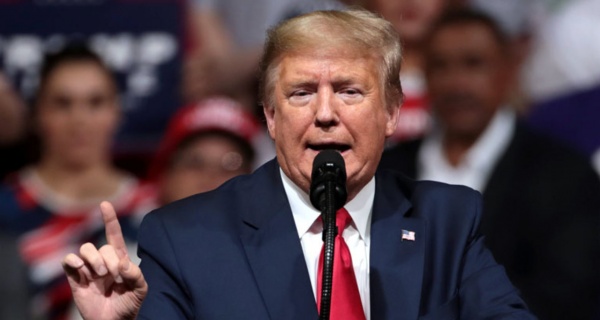 Last week President Trump went back to an often-used excuse he deploys when facing backlash for saying dumb things: sarcasm. But Trump historically has run into problems while attempting to bail himself out of trouble with the word, thanks to his inconsistency in using it correctly and how obvious and transparent it is that he’s lying.

On Sunday, Trump lashed out at the media on Twitter, incorrectly writing that journalists who reported on the Russia investigation should be stripped of their “Noble Prizes.” Twitter did what Twitter does and feasted on both the spelling mistake and Trump citing the incorrect name of the award given to journalists. The president misspelled Nobel Prize and confused the award with a Pulitzer Prize.

But Trump being Trump, he couldn’t just admit a mistake and move on. Instead, he deleted the mistaken tweets and reached into his trusty sarcasm excuse bucket and blamed the world for not understanding his quick wit.

“Does anybody get the meaning of what a so-called Noble (not Nobel) Prize is, especially as it pertains to Reporters and Journalists? Noble is defined as, ‘having or showing fine personal qualities or high moral principles and ideals.’ Does sarcasm ever work?” Trump tweeted.

Sunday’s presidential nonsense came just days after Trump tried to claim that he was being sarcastic when he pontificated about the possibilities of injecting disinfectant as a treatment for coronavirus patients.

As recently as last year, in August 2019, Trump deployed the sarcasm excuse after he said, “I am the chosen one” while speaking rather seriously about trade with China. Later that week, he complained on Twitter, saying journalists “knew I was kidding, being sarcastic.” At least, in this case, Trump appeared to be using the word correctly. But when someone makes declarative statements like the country faces problems that “I alone can fix,” which Trump did during the Republican National Convention, can he then complain if most believe he is deluded enough to think he is the chosen one?

Even during the campaign, in August 2016, Trump flip-flopped when making a new claim of sarcasm. This example would be funny if it weren’t for the seriousness of the office he was attempting to reach and the gravity of the subject matter.

Then-candidate Trump called then-President Barack Obama the “founder of ISIS.” One day later, Trump was asked if he’d like to make a retraction. Trump repeated the lie and added Hillary Clinton to the smear for good measure.

What followed was the most nonsensical renditions of all of Trump’s “sarcastic” claims — possibly ever. The next morning, Trump blamed the media for his attack, tweeting, “Ratings challenged @CNN reports so seriously that I call President Obama (and Clinton) ‘the founder’ of ISIS, & MVP. THEY DON’T GET SARCASM?”

Later that day, during a campaign rally, Trump took the entire controversy to somewhere even parody could not imagine. Trump repeated his sarcasm claim but in the same breath told the crowd: “But not that sarcastic, to be honest with you.”

Just a month before, in July 2016, Trump tried to escape some of the heat he was taking after making a public request for Russia to go after Hillary Clinton’s emails. “Russia, if you’re listening, I hope you’re able to find the 30,000 emails that are missing,” Trump said at a news conference.

The next morning, on Fox News, Trump said, “Of course I’m being sarcastic.”

Even at the beginning of his presidential campaign, in February 2014, Trump used the word in a tweet while blasting then-BuzzFeed writer McKay Coppins. The Donald was so unhappy with Coppins’ profile on him, he wound up firing aide Sam Nunberg, who suggested Trump allow Coppins to join him on the campaign trail to write the piece.

Following its publication, Trump tweeted, “@mckaycoppins is a failed and dishonest reporter who refuses to mention the sarcasm in my voice when referring to him or irrelevant buzzfeed.”

Trump seemed to be saying he was being sarcastic when Coppins wrote that Trump cared about what his publication thought about a speech Trump had just given when he asked Coppins, “What about BuzzFeed? Did BuzzFeed like the speech?” Yet again, Trump was on the attack and framing himself as the victim of someone else’s stupidity.

According to the profile, Trump warned Coppins to look out if he’s unhappy with the way he’s portrayed: “Later in our interview, [Trump] feels compelled to fire a warning shot. ‘If I am treated unfairly, I will go after that reporter,’ he tells me,” Coppins wrote.

“Are you going to come after me when this article comes out?” Coppins asked.

In March of 2014, while railing against Obama during a speech at CPAC, Trump compared Obama’s polling numbers to those of the “late, great” former president Jimmy Carter — who is still alive today.

“We’re getting into Jimmy Carter territory, and I never thought I’d live to see anything like that again. I lived through that time and it was not a good time, and we’re pretty close.… I think by next month we will have surpassed the late, great Jimmy Carter,” Trump said.

This one is obvious. There’s not a lick of sarcasm that can be found here. But that didn’t stop Trump. Those who think he would be stupid enough not to know Carter was still alive, just don’t get the sharp Trump wit in action.

“Of course I don’t think Jimmy Carter is dead-saw him today on T.V. Just being sarcastic, but never thought he was alive as President, stiff!” Trump tweeted.

In April 2014, when Trump was eyeing a run for the Republican nomination, he was booed by a crowd while criticizing Jeb Bush for saying that immigrants who cross the border into America do so “in an act of love” for their families.

Trump later told Fox News that he was “surprised” by the crowd’s reaction, adding that he was being “a little sarcastic.”

“Well, it was strong,” Trump said. “And I was a little bit surprised as I was saying it. I was being a little sarcastic, having a little fun with it, but it was a statement that was not a very popular statement.”

Again, Trump used the word to distance himself from a negative reaction. He consistently pounded Bush over immigration issues during the primary campaign, and his motives were clear in this instance. Trump was attempting to make his opponent look soft and weak on immigration, by using Bush’s remarks about love and emotion against him. But Trump was not being sarcastic. He was using a tactic that usually worked well for him, but on a day when a disapproving crowd pushed back, Trump turned to a familiar refrain — don’t blame me, I was being “a little sarcastic” is all.

A quick Twitter search shows how Trump also uses the word in anger. In 2013, Trump scolded a poor rando with 26 Twitter followers because he dared to accuse Trump of wanting then-President Obama to play golf at Trump’s course, writing, “@josephc45 Do you understand sarcasm?”

And he called another user a “dummy” when again claiming he was being sarcastic.

Even as far back as March 2006, Trump tried to claim sarcasm when he used the word to excuse the cringe-inducing way he spoke about his daughter Ivanka. This is a perfect example of how Trump tries to use the word to place blame when taking criticism.

During an appearance with Ivanka on ABC’s The View, Trump said, “I’ve said that if Ivanka weren’t my daughter, perhaps I’d be dating her.”

Later that month he was asked about the controversial remark on CNN’s Larry King program. Instead of only saying he was joking, which would still be over-the-top disgusting, Trump said, “I made [the remark] on a certain show and it was — everybody was laughing. I was laughing. But one newspaper picked it up, and you know the problem with television is that newspapers don’t see sarcasm and they don’t see laughter and they don’t see the humor.”

The Ivanka joke, like nearly every other instance of him invoking the sarcasm defense, is an example of Trump blaming us for not understanding his razor-sharp, sarcastic wit. But it’s a lie. Trump is the king of saying the quiet part out loud. Sometimes it works in his favor, like when he denigrated immigrants in his speech announcing his candidacy and attracted angry racists to support him. But often his courting of controversy gets him in hot water. And when he’s called out for it, that is when he accuses the media of being too stupid to comprehend his sarcasm. It’s a defense mechanism, part of his narcissistic never-admit-you’re-wrong persona. But don’t let it fool you. When Trump uses the sarcasm excuse, it’s because he knows he’s gone too far but can’t bring himself to admit it.

If you’re looking for an actual example of what sarcasm looks like, look no further than Obama’s 2011 White House Correspondents Dinner speech where he blasted Trump — who was in attendance — for his birther-ism and musing that he was qualified to be president. Being the butt of Obama’s jokes is reportedly what spurred Trump to make a serious run for office, and it’s a master class in the art of using sarcasm to attack your enemies.