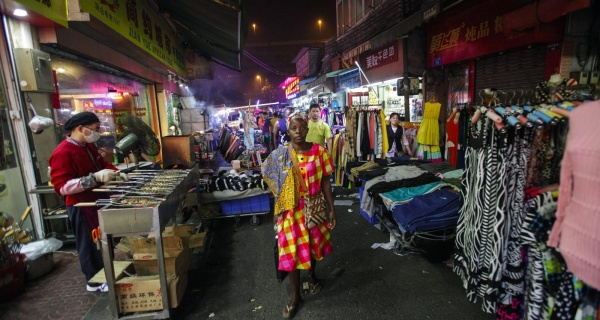 African migrants were being evicted from their apartments in the middle of the night and forced into quarantine in Guangzhou, the third-largest city of China. These scenes went viral on social media, causing widespread anger in Africa and has snowballed into an embarrassing and awkward diplomatic race scandal for Beijing.

While outrageous to watch, these experiences aren’t unfamiliar to Chinese people, says Simon Yu, a young Chinese YouTuber whose latest video attributes the cause of the incidents to features of China’s political system. These features that have accelerated the economic development of China have often also been at the sacrifice of its people.

Criticizing the system is the last thing a Chinese citizen would want to do under today’s political climate, especially for those with an audience. Yu certainly doesn’t want to be seen that way. He calls himself an average Chinese guy, sharing personal perspectives western YouTubers in China may not have. Residing in Shanghai, Yu has been making explanatory videos on news related to China and about Chinese culture since late 2018. He invites fellow YouTubers on to chat about cultural differences from time to time.

How the system works:

Yu starts out his video by stating that racism is a very serious issue in China and that singling out foreigners is morally wrong, but “why this situation happened has more to do with the system we have.”

In most Western and, increasingly, many African countries, government officials are democratically decided by popularity among citizens. They are unlikely to pass blatantly discriminatory policies against minority communities for fear of losing votes in the next election.

In China, however, officials gain their political capital not from those they govern, but from their supervisors, the more senior officials in the ranks. The Chinese officials get evaluated by their superiors on the basis of two things, Yu says, “the first thing is the GDP—if you can bring a huge economic increase to your region, you are more likely to get promoted, and the second thing is stability—if there’s a serious traffic accident, for example, that killed multiple people or some factory blowup because of safety, then you’ve probably reached the end of your career.”

Motivated by these two performance measures, Chinese officials see containing Covid-19 as their top priority. A rise in infection numbers could mean going back to lockdowns, which drags the economy and causes social instability. Radical measures such as blocking roads and taping doors to keep people inside their apartments happened all over the country. The measures might have violated property rights and personal privacy, which were not the priority of the officials and weren’t taken into consideration in making policies, explains Yu.

Policies that prioritize economic development and social stability over all other factors are made all the time in China. Yu gives a few examples:

After China locked down the city of Wuhan, many regions prohibited cars with Wuhan license plates from entering. Some long-haul drivers got stranded on inter-province highways for weeks. Restaurants, hotels, and parks refused entry to customers with Wuhan ID cards. “No [regional official] is going to risk their career in order to keep Wuhan residents happy because that’s not their priority,” says Yu.

A fire accident in the outskirt of Beijing in 2017 left 19 dead. The illegally-built tiny flats failed safety standards and caught fire. In the aftermath, the government started a massive cleaning effort and completely tore down similar structures in the region. It displaced tens of thousands of migrant workers and low-income residents. “The priority of the government is not to help those low-cost workers, but to make sure those accidents don’t happen again.”

Similarly, in order to reduce congestion and pollution, the city government of Beijing only allows cars with non-Beijing license plates to drive in the city for 84 days every year. Chinese media called it the most restrictive policy in history.

Chinese officials do not care about discrimination, be it toward foreigners, Africans, or its own people, Yu says.

Chinese officials tried to explain away what happened in Guangzhou as a “misunderstanding” by the victims and international media. But the misunderstanding may in fact come from the officials who do not seem to acknowledge how their actions are read as racist when dealing with vulnerable minority groups of a different race.

Here's the full video below: