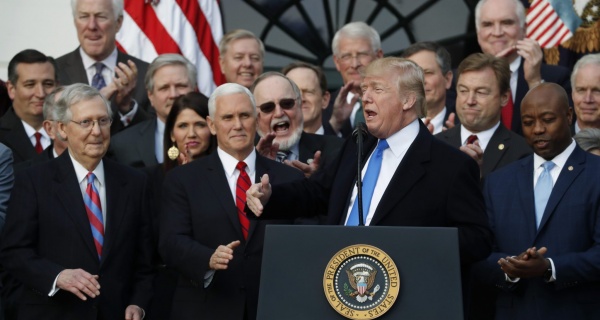 Republican officials are privately panicking over internal data that shows Donald Trump’s support in battleground states collapsing, increasing the likelihood of a Biden victory and a Democratic takeover of the United States Senate.

According to The New York Times, “The election is still six months away, but a rash of ominous new polls and the president’s erratic briefings have the G.O.P. worried about a Democratic takeover.”

The Times notes that the GOP plan for the general election campaign was to run solely on the economy, but that strategy has been completely blown up by the pandemic.

“Glen Bolger, a longtime Republican pollster, said the landscape for his party had become far grimmer compared with the pre-virus plan to run almost singularly around the country’s prosperity,” according to the report.

More via The New York Times:

[A] recent wave of polling has fueled Republican anxieties, as Mr. Biden leads in virtually every competitive state.

The surveys also showed Republican senators in Arizona, Colorado, North Carolina, and Maine trailing or locked in a dead heat with potential Democratic rivals — in part because their fate is linked to Mr. Trump’s job performance. If incumbents in those states lose, and Republicans pick up only the Senate seat in Alabama, Democrats would take control of the chamber should Mr. Biden win the presidency.

Republicans were taken aback this past week by the results of a 17-state survey commissioned by the Republican National Committee. It found the president struggling in the Electoral College battlegrounds and likely to lose without signs of an economic rebound this fall, according to a party strategist outside the R.N.C. who is familiar with the poll’s results.

The Trump campaign’s own surveys have also shown an erosion of support, according to four people familiar with the data, as the coronavirus remains the No. 1 issue worrying voters.

Donald Trump has never been a popular president, even among GOP insiders who don’t see him as fit to hold the office.

But Republicans sold their soul to the devil anyway, because they saw him as a vehicle for their right-wing fantasies of tax cuts for the wealthy and conservative court appointments.

That decision to stand by Trump as he repeatedly demonstrates he’s the most corrupt and incompetent president in history could finally come home to roost in November.

It’s too late for Republicans to unhitch their wagons from the derailing Trump train. If and when Trump fails, they know they will, too – and they’re panicking.