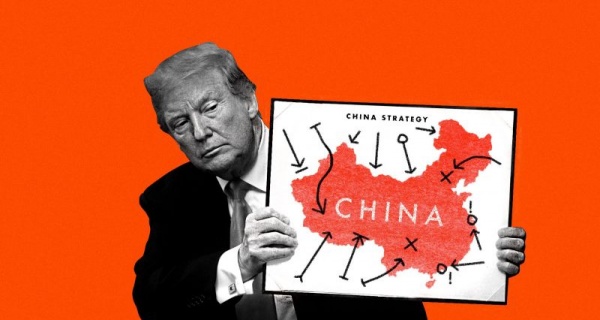 The President’s reëlection campaign has released an ad attacking Hunter Biden’s connection to a Chinese bank, but Trump has benefitted from Chinese investment, too.

Earlier this week, the right-leaning commentator Walter Russell Mead published a column in the Wall Street Journal arguing that Donald Trump’s best chance of being reëlected in November is to run against China. “With the economy in shambles and the pandemic ravaging the country, making the election a referendum on China is perhaps Mr. Trump’s only chance to extend his White House tenure past January 2021,” Mead wrote. This strategy would enable Trump to exploit a coronavirus-related distrust of China, Mead added, and it would create problems for Democrats which would include, but also go beyond, Hunter Biden’s business ties to the Middle Kingdom. Plenty “of other senior Democrats have made money (in China), supported trade policies that gave away too much without holding Beijing accountable, or praised China’s government in ways that would make painful viewing in a campaign ad today,” Mead said.

The column sounded cynical, but it didn’t come out of nowhere. Trump’s campaign has already released an ad highlighting Hunter Biden’s connection to a Chinese bank, and Trump said last weekend that if Joe Biden was elected foreign countries such as China and Mexico would “own” him. On Thursday, Secretary of State Mike Pompeo upped the ante, blaming China for the global COVID-19 death toll. In an interview with Fox News’ Sean Hannity, he said, “China caused an enormous amount of pain, loss of life, and now a huge challenge for the global economy and the American economy, as well, by not sharing the information they had” about the virus. Senator Tom Cotton, a Republican from Arkansas and a longtime China hawk, called for a big military buildup in East Asia. “The Chinese Communist Party will try to exploit the world’s weakness in the wake of a virus it unleashed,” Cotton claimed on Thursday. “We cannot allow it to succeed.”

With criticisms of Trump’s handling of the pandemic growing and new opinion polls showing him trailing Biden in several key battleground states, we are sure to see more of these diversions. But adopting a China campaign strategy would also present a number of problems for Trump, beginning with the fact that Hunter Biden’s investment partnership isn’t the only American business that received funding from Chinese entities. In 2012, the Bank of China, a commercial bank owned by the Chinese state, provided more than two hundred million dollars in loans to a New York office building that Trump co-owns, Politico reported on Friday. The loans will come due in 2022, “in the middle of what could be Trump’s second term,” the timely article noted.

The building in question is 1290 Avenue of the Americas, which is located between West Fifty-first and West Fifty-second Streets. The majority owner of the building is Vornado Realty Trust, a big real-estate company that is run by the veteran developer Steven Roth. In 2007, the Trump Organization acquired a thirty-per-cent stake in the Sixth Avenue building and also in separate Vornado development, in San Francisco. By all appearances, the Vornado stake has been one of Trump’s most successful investments, and the Bank of China played a significant role in its success. “The debt stems from a $950 million refinancing deal in 2012, to which the Bank of China chipped in $211 million,” the Politico article said. “Vornado’s federal financial disclosures show it and the other owner of 1290 Avenue of the Americas—Trump—are still indebted from the 2012 deal.”

To be sure, there is no suggestion in the Politico story that the Chinese bank supplied this large sum of money specifically to curry favor with Trump. He hadn’t officially entered politics in 2012, and the Chinese institution also participated in other American real-estate deals around the same time. According to a report in the Wall Street Journal from 2013, the Bank of China was “already one of the largest foreign lenders to commercial real estate in the U.S., helping finance prestige properties.” The Journal story said that the Chinese bank extended the 2012 loan to Vornado intending to package it into mortgage bonds, which it could then sell to other investors at a profit. In an update to its story, Politico wrote that on Friday evening the Bank of China issued a statement saying it did do a securitization and “has not had any ownership interest in that loan since late November 2012.”

But the fact remains that Trump, through his thirty-per-cent stake in the building on Sixth Avenue, has benefitted personally from a big loan from China, whoever owns it now. The Politico article linked to a filing from Vornado to the Securities and Exchange Commission, which shows that the nine-hundred-and-fifty-million-dollar loan carries an annual yield of 3.34 percent and is due in November, 2022. “There are definitely legitimate questions that are raised by Hunter Biden’s actions,” Robert Maguire, the research director for Citizens for Responsibility and Ethics in Washington, told Politico. “They are not even in the same ballpark as the conflict of interest questions raised by President Trump’s continued relationship with his own company.”

Whether Trump’s businesses received more loans from state-owned Chinese banks—or other investors with ties to foreign governments—is unknown because Trump refuses to release his complete tax returns and other financial records. The “financial disclosure law did not require him to disclose any business loans he had not personally guaranteed,” Walter Shaub, a former head of the Office of Government Ethics, which establishes standards for the executive branch, wrote on Twitter on Friday. “So, who knows who else he owes money? I’ll tell you who: The lenders who have him in their grip.”

We do know that Trump-family companies have done business with Chinese entities on other occasions, too. In 2017, a Trump-branded golf resort in Dubai hired two Chinese firms to do construction, McClatchy reported. And, since Trump has been in the White House, the Chinese government has issued numerous trademarks to Ivanka Trump’s businesses.

Relative to the size of the two-hundred-and-eleven-million-dollar loan in 2012, these dealings were minor, but they confirm the essential truth that Trump, despite his rhetoric, is a participant and a beneficiary of the global economic system that he blames for the gutting of the American middle class. The Chinese financial investments that end up funding Trump’s office buildings and similar high-end developments are the mirror image of the trade deficit that has cost the United States, and Trump-supporting regions in particular, millions of jobs. The United States sends money across the Pacific to pay for goods manufactured in China, then China uses a lot of that money to make dollar-denominated investments in real estate and other sectors, and purchase U.S. Treasury bonds.

Trump won’t dwell on any of this during the campaign, of course. But, the next time he brings up Hunter Biden or starts railing against the Chinese government, somebody should ask him about the 2012 loan from the Bank of China.