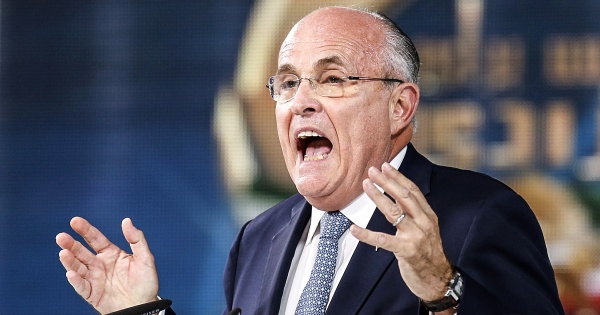 Former New York City Mayor Rudy Giuliani was on Laura Ingraham's show on Fox News Thursday night when the subject turned to the coronavirus -- and attempts in New York to develop a contact tracing system to be able to monitor future outbreaks.

That's when this exchange happened:

Ingraham: The army of tracers.

Giuliani: Then we should trace everybody for cancer.

Giuliani: We should trace everybody for cancer, and heart disease. And obesity. I mean, a lot of things kill you more than Covid-19. So, we should be traced for all those things. I mean life possesses a certain degree of risk.

Here's the thing, Mr. Mayor: Those diseases are not at all the same. Cancer, obesity, and heart disease are not contagious. Coronavirus is. Which is why contact tracing is a strategy to combat coronavirus and not, say, obesity.

According to the current research on the virus, every person with coronavirus infects, on average, two other people. So, if one person infects two then those two infect four then those four infect eight then those eight infect 16 -- well, you get the idea: The number of people infected starts to get very big very quickly. Which is why the vast majority of the country has been spending the past five weeks staying at home and maintaining social distancing. Because staying away from each other is the best -- and, really, only -- way that we currently have to combat the virus.

And the infectiousness of coronavirus is also why contact tracing -- essentially being able to figure out in a very short period of time all the contacts an infected person has had in order to limit the spread of infection -- is important. So that we are not back in this same situation in a month or six months. As the CDC says of contact tracing: "Immediate action is needed. Communities must scale up and train a large contact tracer workforce and work collaboratively across public and private agencies to stop the transmission of Covid-19."

Giuliani -- and Ingraham -- seem to not understand that notion. Instead, they saw the news that former New York City Mayor Michael Bloomberg was heading up the contact tracing efforts in the Empire State as an opportunity to mock the idea of "an army of tracers."

My guess is that what Giuliani and Ingraham were going for was a mockery of a nanny state -- that people would be tasked with watching everyone else to ensure that the virus didn't spread. Which isn't how contact tracing works at all. But whatever.

Here's the problem with stuff like this: it isn't just a harmless exchange. Lots and lots of people watch Ingraham's show; in the first quarter of 2020, it was the fourth highest-rated show on cable TV. They trust Ingraham. They trust Giuliani. And so when a man once referred to as "America's Mayor" says something so flatly false -- and, candidly, ignorant -- it will have the impact of turning some watchers against the idea of contact tracing.

Which is, again, according to doctors and infectious disease experts, exactly what we need to ramp up to deal with a second possible outbreak.