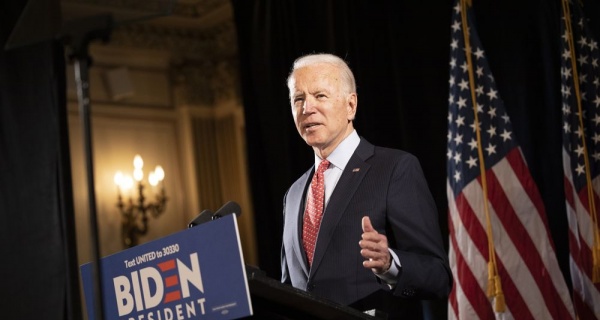 “Mark my words, I think he is gonna try to kick back the election somehow, come up with some rationale why it can’t be held,” the former vice president told donors during a virtual fundraiser, according to a pool report cited by multiple outlets.

Biden also suggested that Trump is doing “all he can to make it very hard for people to vote” in the ballot with his attempts to use an emergency federal loan as leverage over the Postal Service to bring it further under his administration’s control.

“Imagine threatening not to fund the post office,” Biden said at the online event, titled “A Fabulous Evening With Vice President Joe Biden.”

“Now what in God’s name is that about?” he asked. “Other than trying to let the word out that he’s going to do all he can to make it very hard for people to vote. That’s the only way he thinks he can possibly win.”

To be clear, Trump himself cannot cancel or delay the election. The power to change the election date falls on Congress. And should the vote be postponed, Trump’s term in office would automatically end on Jan. 20, 2021, anyway, Slate noted.

During the event, Biden also warned of Russian interference in the election and said the controversial primary that Republicans pushed ahead with in Wisconsin earlier this month (which forced thousands of people to head to the polls despite a statewide stay-at-home order due to the coronavirus pandemic) had sent a “giant warning flare to the nation.”

“Republicans were trying to force in-person voting no matter the health cost,” he said. “We have to figure out how we are going to conduct a full and fair and safe election in November, and no one should have to risk their lives to cast a ballot.”

Actor Robert De Niro last year floated a theory that if Trump, who has repeatedly joked about being president for life, won the 2020 election, then he could declare war to remain in office for a third term. The 22nd Amendment of the U.S. Constitution, however, prevents a president from serving more than two terms.